The Decline and Fall Of Hillary Clinton's Class Warfare Campaign 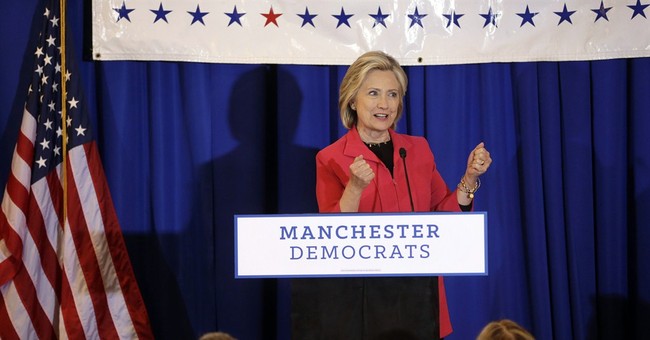 WASHINGTON - Struggling to come up with a strategy to put her in the Oval Office, Hillary Clinton has declared war on billionaires, big business, hedge-fund managers, Wall Street, and anyone else who has become successful in the American economy.

That's what turns on Democratic voters and at her first big political rally Saturday on New York's Roosevelt Island, she decided that class warfare was the only possible route to the Oval Office, and that she is willing to play that game with a vengeance.

Abandoning the low-key campaign she began in April when she announced her candidacy, Clinton concluded that a strategy of political platitudes and dodging the hard issues wasn't working.
Her favorability polls have sunk into the 40s and Sen. Bernie Sanders, a self-declared socialist, was suddenly drawing enthusiastic crowds with fiery attacks against Wall Street and big banks. And attacking Clinton for refusing to say what she really thinks of President Obama's wounded Trans-Pacific trade legislation.

On the campaign trail, Sanders is delivering the kind of political red meat leftist Democrats eat up. Like this line:

"Continuing greed is destroying this country, and it has got to stop."

So in an attempt to get her campaign on track, Clinton let loose with a speech on Saturday that would have made the late "share the wealth" Louisiana governor Huey Long proud.

"Prosperity can't be just for CEOs and hedge-fund managers," she declared at an outdoor rally on New York's Roosevelt Island, with the Wall Street skyline behind her. "Democracy can't be just for billionaires and corporations. Prosperity and democracy are part of your basic bargain, too. You brought our country back. Now it's time -- your time -- to secure the gains and move ahead," she said.

If that sounds like she is taking a swing at the sluggish Obama economy in which working class wages have been virtually flat for years, and millions of Americans are forced to take part-time jobs when they need full-time work, well, that's what it sounded like.

But if you're looking for any specifics about how she would accelerate and sustain stronger economic growth, your search will be in vain. Her advisers are still trying to figure that out.

So the question remains what does she really want to accomplish if she succeeds in her second bid for the presidency?

The science of economics is foreign territory for Hillary and thus far she's made no effort to champion any macro, pro-growth proposals. Certainly not the economic reforms her husband Bill Clinton embraced as president, from the North American Free Trade Agreement to capital gains tax cuts that led to a soaring, investment led economy in his second term.

Early in Obama's first term, when he was bashing big corporations, Wall Street bankers and anyone of wealth, Clinton remarked in an interview, "I never criticized people for their success."

Then there is Hillary Clinton's multiple disabilities as a campaigner that no one seems to be focusing on at the moment. And that is her annoying habit of using remedial rhetoric that's either politically irrelevant or simply dodges the hard issues.

She talked Saturday about President Roosevelt who, in the depths of the Great Depression, "called on every American to do his or her part, and every American answered," she said.

"It's America's basic bargain: If you do your part, you ought to be able to get ahead. And when everybody does their part, America gets ahead," she added.

What's her point? Millions are still underemployed in the Obama economy, though they want and need full-time work and are struggling to get ahead. Millions of longterm, jobless Americans have stopping looking for a job, but are hoping they will become plentiful again. Good luck.

The problem in the Obama economy isn't that people aren't doing their part. The problem is that the president's anti-growth, anti-job, and anti-income policies are holding our underperforming economy back.

I have yet to hear or read about a Clinton speech that bemoans the problems that have plagued our economy in the last six and a half years. Not one.

What is the rationale for her presidential candidacy if it isn't to strengthen economic growth and boost incomes, and, as JFK said, "get America moving again"?

She gave us one clue in her Sunday speech in Iowa:

Many voters no doubt are supporting her for that reason alone, but for the majority of voters who disapprove of the dismal direction our country is headed, that will not be the salient reason.

Indeed, there is growing evidence that the more voters get to know Clinton and listen to her political platitudes, the less they like her and what she stands for. Particularly in the media.
The liberal Washington Post's Ruth Marcus, admitted in a stinging column Tuesday to a loss of confidence in the former secretary of State in recent weeks.

Tuesday's policy rollout was "two months too late," she wrote. "Clinton's soft, substance-free launch created a vacuum. That space was filled by damaging reports on her family's lucrative speechifying and foundation-building."

"How can we have confidence that Clinton will stand up for what she believes in when that happens to conflict with her party's base and the political dictates of the moment?" she wrote.

With 57 percent of Americans saying in a recent CNN-ORC poll that she is neither honest nor trustworthy, Clinton is sinking fast into deep political trouble.