Word of Warning to the Dems: Do Not Overreach 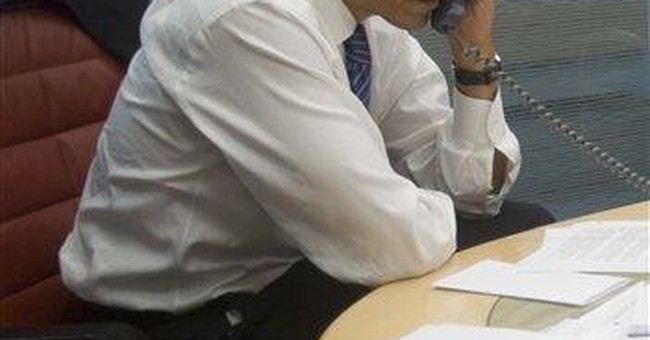 WASHINGTON -- Within hours of Barack Obama's historic election last week, a chorus of media analysts were predicting that the Democrats had at last built a permanent majority that would keep them in power for many elections to come.

The Washington Post crowed on its front page that the "Democrats appear to have built a majority across a wide, and expanding, share of the electorate," suggesting that a permanent majority "may be underway."

But a day after Democrats reclaimed the White House and tightened their grip on Congress, a key Democratic strategist was suggesting otherwise.

Bill Galston, who was chief domestic adviser to President Clinton and a policy architect, says, "Democrats do not have a mandate" to usher in a reign of bigger government because there isn't a majority for it.

This was no time to "emulate Franklin D. Roosevelt or Lyndon Johnson," he warned in a memo titled "After The Obama Win," in which he cautioned his party to scale down its spending ambitions to a set of more moderate priorities "that can be met before voters rethink (the election) in 2010."

"That Democrats now command a unified government for the first time since the catastrophic midterm defeat of 1994 should flash strong warning signs to party leaders," said Galston, now a government scholar at the liberal Brookings Institution. Translation: If you make the same mistake of overreaching, Democrats will pay the price in the midterm election two years from now.

Meantime, a veteran elections-trend analyst cautions those who think Tuesday's results mean that Democrats have begun a long reign of power to think again. "Obama was the beneficiary of an unusually good political climate that favored him and the Democrats, but it's not going to stay pro-Democrat forever," Rhodes Cook told me after Tuesday's vote.

"We can't see we are in a new liberal era until that has been confirmed in a few more elections. If Democrats think that is the case now, they do so at their peril," Cook said. In other words, the news media's obituaries for the Republicans are a bit premature. Think back to the 1964 election, when LBJ crushed Barry Goldwater and the Republicans in a landslide. Just about every analyst said that the GOP was finished for at least a generation. Four years later, Republicans took back the White House and were making gains in Congress.

Preliminary election stats tell us that the Democrats' victory was based in large part on its increased support in the suburbs where Republicans once ruled supreme. Obama won 50 percent of these voters, just three points more than Sen. John Kerry's losing performance in 2004.

But if you think about the devastating impact that the economy's decline has had on the nation's electorate, that isn't exactly a sweeping change in this key constituency. Remove the economic issue when the economy recovers and the suburbs will once again be very much in play. There are those who consider John McCain's 46 percent share of the popular vote a sure sign of the GOP's future demise, but in the face of a "perfect economic storm," he did better than many imagined he would. It isn't reflected in Obama's big electoral vote, but, in many states, this was a close election.

Back to Bill Galston and his cautionary warning to the incoming Obama administration and larger Democratic majority on Capitol Hill: Don't make the mistakes Clinton Democrats made in 1993. The biggest mistake was the failure of the Clinton administration and congressional Democrats "to form an effective coalition around a common agenda that led to a series of divisive votes" on trade, the budget, guns and other issues. Then came the disastrous Clinton health-care plan. Two years later, the Democrats got whacked on the side of the head in the midterm elections by voters who claimed they didn't vote for "this."

Obama will enter the presidency with a long and costly laundry list of domestic spending bills that would add another $1 trillion or more to the federal budget. Even without these spending plans, the deficit for 2009 is expected to hit $1 trillion as a result of the $700-billion financial rescue plan and the likelihood of a second stimulus package in the lame-duck Congress. But Galston questions whether Obama's decisive victory really means a majority of Americans want a much bigger government.

A recent Pew Research Center poll released found that 43 percent favor "a bigger government offering more services" versus 45 percent who favor a smaller government with fewer services." Those numbers haven't budged in the last six years. "President Obama and congressional Democrats cannot assume that the (voters') rejection of conservative economics implies an endorsement of the liberal alternative," Galston writes. If the Obamacrats ignore his advice, the remaining Republican minority will no doubt remind them, and the country, that the 2008 election was not a mandate for either the New Deal or the Great Society.