Devon Herrick
|
Posted: Mar 08, 2016 12:01 AM
Share   Tweet
The opinions expressed by columnists are their own and do not necessarily represent the views of Townhall.com. 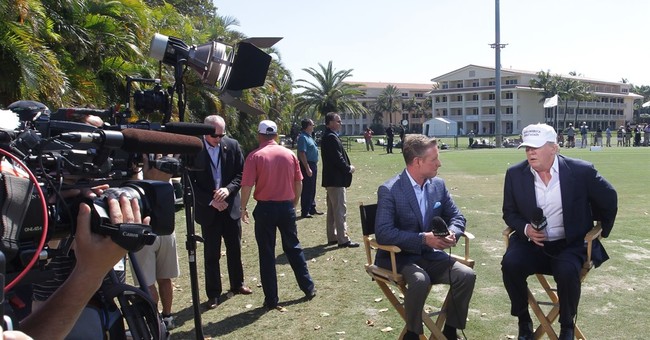 Remember that Trump is the guy who famously said it would be very simple… “Lock the best health care policy minds in a room -- and don’t let them out until they’ve crafted a plan for providing terrific coverage for everyone.” One question those of us who work in health policy want to know is who would Trump lock into a room? Nobody I know one can identify a single Trump health care advisor. It’s a mystery.

Universal Coverage. Trump hinted that he supports universal coverage when he said he doesn’t want people to “die in the streets” because they cannot afford health coverage. I don’t know why Republicans allow this narrative to endure. Most sick people die in their beds or in a hospital bed. Moreover, about 60 percent of health care spending is on chronic illness related to poor lifestyle choices. Think obesity, high cholesterol, hypertension, diabetes and many case of cancer. If you actual talk to moderate-income people, most are not terribly excited by the prospects of having high deductible health plans. What they actually want is the ability to see a doctor when they get sick.

Medicare for All. Among liberals Medicare for All (single-payer health insurance) is the utopia they all fantasize about. If the government is the only legal payer, it can use health care payroll taxes as an income redistribution scheme. But usually not discussed is that provider fees have to be set artificially low to ration care and make universal coverage affordable. A more accurate name would be Medicaid for All!

Trump suggested single-payer health insurance at one point. He ultimately rejecting the idea -- probably after realizing socialist Bernie Sanders is the only other presidential candidate supporting such a cockamamie plan. The main attraction of single-payer is not buying power; it is monopsony power. If only one entity is allowed to pay for medical care that buyer has near-absolute control which services it will pay for and how much it will pay. One can easily imagine Trump’s attraction to that sort of market power.

Negotiate Medicare Drugs Prices. Although not on his website, in previous debates Trump asserted that Medicare could save $300 billion if it negotiated drug prices with pharmaceutical makers. Medicare only spent about $86 billion on drugs in 2014. Presumably, drug makers would be forced to pay Medicare to take their drugs.

Obamacare Regulations. Although not on his website, Trump has said he would keep the provision prohibiting insurers from denying coverage to people with preexisting conditions. Trump would not keep the individual mandate, however. Regulations like guaranteed issue are always coupled with community rating, otherwise it makes no sense. Furthermore, most experts believe an individual mandate is necessary to keep guaranteed issue from destabilizing the insurance market. The thinking goes: unless you can force healthy people to enroll and over-pay for coverage, it is not possible to give unhealthy people a sweetheart deal. That is why Obamacare has an individual mandate.

Trump’s website proclaims “By following free market principles and working together to create sound public policy that will broaden healthcare access, make healthcare more affordable and improve the quality of the care available to all Americans.”

Just about every presidential candidate since Truman has made the similar promise. So what would Trump do?

Repeal Obamacare -- including the mandate. Trump is correct that Obamacare will collapse under its own weight sooner or later. The question is how much more damage will Congress allow to occur before even Democrats in Congress admit it’s not working as intended.

Sell Health Insurance Across State Lines (as long as the policy conforms to state regulations). The insurance market has consolidated and many insurers already offer plans in numerous different states. This idea was all the rage among Republicans a dozen years ago. Former Arizona Representative John Shadegg (R-AZ) was its champion for many years. It was not designed to spur competition among insurance companies as Trump suggests. It was actually intended to spur competition among state legislatures to force some of the egregious ones (i.e. New York, New Jersey, Massachusetts, Maine) to reduce costly mandated benefits and regulations. Failure to do so would lead to the ultimate demise of domestically domiciled insurers. Yet, Trump would require insurers to conform to regulations in every state they do business. This also makes little sense. The regulations that were the most onerous, guaranteed issue / community rating, are apparently ones Trump supports. Obamacare has already codified these costly regulations into law.

Make Health Coverage Tax Deductible. Allowing individuals to deduct the cost of individual health coverage from their taxes has been suggested for years. It would create tax fairness between individual insurance and insurance purchased through an employer. But if Obamacare is repealed it would not help that many Americans. In the long run, it could potentially exacerbate the overuse of third-party insurance rather than self-insurance because the tax subsidy for individual health coverage would be open ended.

Encourage the use of Health Savings Accounts. That’s a good idea, although it doesn’t appear he proposing anything that’s not already allowed.

Require Price Transparency That’s a good idea in theory, but difficult in practice. It’s not clear which price providers would have to disclose. Would it be the chargemaster (or list price) price that few people actually pay? Would chargemaster prices be disclosed by billing codes making prices meaningless to anyone comparing prices for a service more complex than a CT scan? You get the idea. There is not one price; but dozens of prices for a given procedure. The actual price varies depending on the health plan. GM gets a better deal than the local flower shop owner. Would Trump require hospitals to disclose Blue Cross and Aetna’s proprietary negotiated prices? Or would he require hospitals to disclose cash prices? There are actually two (possibly more) cash prices. There’s the list price that you can pay in cash. There’s the cash in advance price. After a procedure is performed there is often an “I’m not going to pay my bill if you don’t give me a better discount” cash price.

Trump doesn’t delve into why prices are so hard to come by. Prices are rarely disclosed because providers do not compete on the basis of price. If he’d solve that problem, price transparency would naturally follow.

Medicaid Block Grants. This is a standard Republican proposal. It’s a good one. At the very least, the federal government’s contributions for state Medicaid programs should not be open-ended. The respective federal and state contributions should be negotiated. States should be on the hook for all cost overruns at the margin.

Allow Importation of Prescription Drugs. This already occurs, but it’s up to the manufacturer to authorize importation or reimportation. What Trump is really saying is drug makers should not be allowed to engage in price discrimination, where they sell an expensive drug cheaper in India than in Indiana. Most economist suspect this would have very little effect on American drug prices. It would have a huge effect on drug prices in third world countries, however.