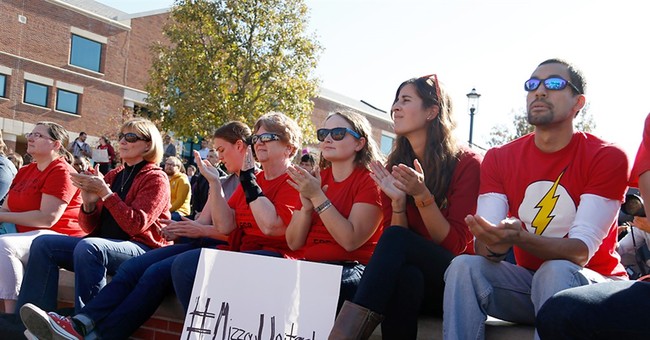 I can’t even bring myself to pretend anymore; progressives are simply wastes of human flesh. They’re spoiled rotten scum, and I mean that with all due respect. And by all due respect I mean none, since they are worthy of none.

The bed-wetters currently drum-circling and camping in the quad at the University of Missouri should be expelled. The football players who threatened not to play their game this weekend should have their scholarships revoked. The coaches who supported them should be fired. The faculty who aided these mutants should be unemployable for the rest of their lives.

This childish temper tantrum started over literally nothing. Some students who belong to a race-based group of black students looking for grievances for attention claimed some nebulous racial incidents no one else seems to have witnessed. Then there was the poop swastika.

Yes, the poop swastika. There was allegedly a swastika of smeared human feces on a wall in a bathroom. How this anti-Semitic symbol became anti-black will remain a mystery. As will whether it even existed.

No one can prove it happened. No one!

In a time of cell phones and everyone having a camera on them at all times, no picture or video exists of this. No one will say they saw it. The only “proof” that exists is a picture circulating the Internet that is more than a year old.

Still, this was enough to bring unwashed, angry and uneducated students to the quad to demand justice of some sort or another.

A student named Jonathan Butler went on a hunger strike for a few days for justice. Seems Butler just couldn’t take the racism at Mizzou…after attending the school for undergrad and grad school. That’s a lot of time to spend in a racist hotbed.

Still, Butler had no proof of anything racist. Nor did any of this fellow travelers. All they could point to is the made up stupidity called a “climate of racism” on campus. Apparently the barometer of ignorance registered a low point when centered above these morons.

The ignorance or indifference to reality of these unemployable brats and their “demands” was matched only by the faculty at Mizzou and the president of the university system, Tim Wolfe. Some faculty, mostly older and white (and probably lonely and, most likely, unlovable), ran to relive their childhoods, which must’ve been awful, and joined in the camping trip for justice.

Wolfe, rather than show leadership and clean out these brats, tried to play indifferent and above the fray. He’s out of a job now because his underpants are empty, at least in front.

The staff is facing public backlash, but that’s about it. One had to apologize-ish.

Melissa Click, a professor of mass communication, was caught on video screaming for “muscle” to come help her remove a reporter from a public space. After she was identified, she released a statement apologizing … sort of.

Click’s statement reads, in part, “The events of Nov. 9 have raised numerous issues regarding the boundaries of the First Amendment.” Her intent might not come through completely; it reads different in its original German.

But it was a non-apology apology because she’s not sorry. She only sorry she was identified in the video. Fascists aren’t sorry; they’re only caught.

While these mutants continue to sleep in the quad and await whatever their next demand is to be met, there’s another group of aimless privileged trolls demanding someone hug their pain away.

Yale, the overpriced Ivy League school, is still dealing with the aftermath of Halloween. What’s the problem? Adults told other adults they should deal directly, as adults, with anyone they see waring a costume – for that one night only – they find offensive. I swear to God.

They’ve taken to the streets to protest and demand justice for being exposed to the hostility of someone who disagrees with them.

Without a poop swastika at Yale, these brats have little to whine about. Rather than specifics, they simply want to feel “safe.” But unsafe means having someone with a differing opinion near them. They are a disgrace.

These spoiled Yalies and Mizzou morons are everything that is wrong with progressives and the Democratic Party. They should be told to shut up and go back to school or leave. But these are Democrats. These are their voters. This is their base. These are their ideals.

Fitting, really, that the Democratic Party’s leading candidates and their most direct and dedicated disciples share not only a love for fascistic tactics but also a need for adult diapers. Now if only some of them would act like adults.