The United States Of The New York Times 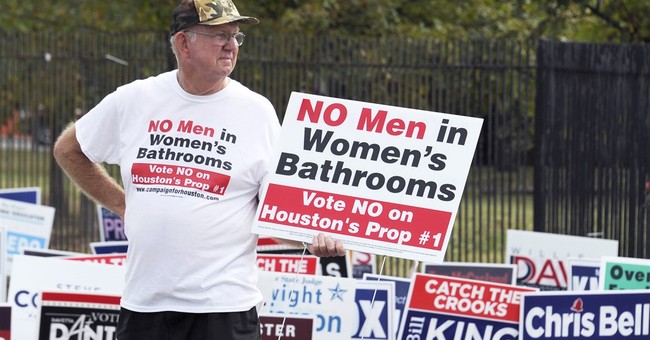 This country is awful. I know that because I read it in the paper and heard it on the news. The reasons for our being awful didn’t make much difference. They change every day because there’s always something new for which we’re awful.

And when there aren’t fresh pickings the media hops in the way-back machine and re-animates a greatest hit. But what would this “awful” country look like were it magically transformed into New York Times Utopia? This week gave us a peek.

The city of Houston decided it didn’t want to replace gender-specific bathrooms with a communal hole in the center of town, conveniently located next to the public bucket everyone must use to shower.

In the latest example of how acronym creators are underpaid, the “HERO” act was resoundingly rejected by the people of Houston at the polls Tuesday. “HERO” stands for Houston Equal Rights Ordinance, which has anti-discrimination as its publicly stated goal.

A laudable goal, but like everything else progressives do, the way they went about it was a massive overreach.

The law allowed anyone who “identified” as another gender to use whatever bathroom they decided they were at any given moment. That would be a gross overgeneralization if the term “gender fluid” did not exit. Aside from transgender, which means you “identify” as the opposite of your scientific biological gender, gender fluid is exactly what it seems like it would be – fluid. Whatever you feel like at any given moment.

It’s more complicated than that, but this isn’t an after-school special about the exciting new world of made-up genders. The point is HERO would have allowed people to use whichever restroom they wanted whenever the urge hit them. People tend to feel vulnerable in the bathroom and to prefer privacy. And they don’t want to see a 6-foot-5 bearded dude follow their 12-year-old daughter into the john, so they told their elected officials “no.”

This exercise of democracy, a word progressives love to chant when calling for the seizure of private property from successful people or drum-circling in support of cop killers, was met with resounding outrage. The cry went, “How dare those uneducated, ill-cultured louts reject the enlightened science behind the idea that gender is something we’ve misunderstood for the entirety of human history, missing several dozen options,” or something of the sort.

Being devout ideological disciples of history’s worst propagandists, the Times’ writers blamed future suicides on those who don’t enjoy the idea of a communal chamber pot. The Times editorial board wrote opponents “will be remembered as latter-day Jim Crow elders. Their demagogy is egregious because it preys on some of the most vulnerable people in our society.”

Yep, having an outie but feeling like an innie is the new black, at least according to the paper of record. There is no justice unless and until the .0002 percent of the population who wake up each morning not knowing which bathroom they’ll use that day get to impose their will on everyone else. To paraphrase our left-wing friends, this is decidedly not what democracy looks like.

The ordinance would not have been an issue had the left not brought it into the bathroom. But it is what progressives want America to look like – unitards and bowl haircuts for all! If you’re so fragile that which bathroom you use will make or break your life, or even just your day, wear an adult diaper or hold it. And get therapy. What you don’t get to do is impose your will on the rest of the country.

To see what this “Utopia” progressives seek to shoehorn down the nation’s throat, all we have to do is head over to Yale.

Progressive Yale students are upset administrators have not seriously addressed their fragile and damaged feelings over what fellow students wore for Halloween. An actual person of human adult human age wrote the following, publicly – that administrators “have failed to acknowledge the hurt and pain that such a large part of our community feel. They have again and again shown that they are committed to an ideal of free speech, not to the Silliman community.”

This stupidity stems from spoiled, mindless progressive students not liking costumes worn by students with different skin colors. They condemn “an ideal of free speech” because it offends their hyper-sensibilities.

This student continues to whine about how rough her life is because one of those people who value free speech refuses to become her father at college. It devolves into this:

I have had to watch my friends defend their right to this institution. This email and the subsequent reaction to it have interrupted their lives. I have friends who are not going to class, who are not doing their homework, who are losing sleep, who are skipping meals, and who are having breakdowns. I feel drained.

If these creatures manage to graduate, their mental instability and desperation for acceptance will make them prime recruits for ISIS.

Let ISIS have them; the world will be better off.

This temper tantrum at Yale is what the world would look like if we were run as a nation by the New York Times. A victim hiding under every bed and a grievance in every pot.

Also emotionally and mentally frail. If the left is truly interested in suicide prevention perhaps they should end the coddling that creates emotional basket cases the moment they encounter resistance or a differing opinion. In most cases, however, those who so readily embrace their victim status are, more often than not, the perp.

Progressives have spent decades dividing the American people, then convincing them their group is the victim of the “others” in order to win politically. Manipulation disguised as concern. And it’s worked.

Now it’s turning on itself; the monsters they’ve created are loose inside the castle walls. Grab a drink and watch it burn.

The Times declares, “In time, the bigots are destined to lose.” Considering how much they’re losing, both at the ballot box and their bottom line, it sure looks like they might be right.