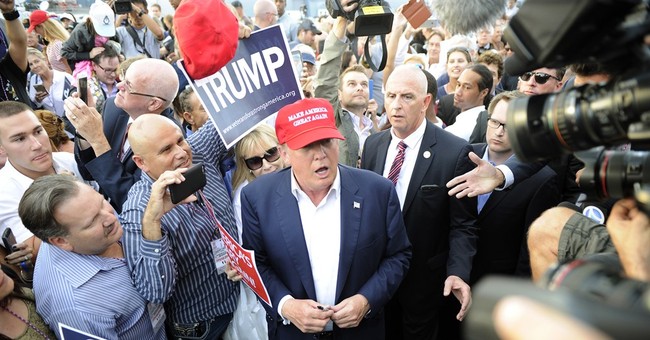 Members of the Republican establishment are beginning to worry. Their grasp on power is slipping like sand through a child’s fingers as they desperately try to hold on.

This primary season was supposed to be smooth sailing, easy going. It would start with a large field of excellent candidates from across the spectrum of the Republican Party engaging in serious policy debates and producing a confident candidate fully prepared to take on Hillary Clinton for the presidency. But as the old joke goes, “If you want to make God laugh, make a plan.”

Donald Trump’s candidacy is the publicity stunt that could. He’s found himself at the top of the polls, the mouse that roared.

Nothing about Trump’s campaign is conventional, which is exactly why it’s working. Other candidates have left their homes and are traveling the country non-stop, shaking hands, kissing babies and taking questions in coffee shops about issues no president will ever encounter.

Meanwhile, Trump sits in Manhattan, in his office in a building he built and put his name on, picks up the phone, calls CNN for 20 minutes and dominates the next 24 hours of news coverage. It’s a campaign noted recluse Howard Hughes could’ve run. But it’s working.

No other candidate could make a phone call to a cable news network and get a half-hour of airtime. Fox News seems to have drawn a line, shunning the phone call for a satellite remote set up in the lobby of Trump’s building. His commute is an escalator ride.

No other candidate ever has polled so high so long while simultaneously risking rickets from rarely leaving a building.

Oddly enough, none of the other candidates even seem to understand why Donald Trump is beating them. They keep doing the same things they’ve always done to win elections, but now those things are not working.

They’re confused as to how someone who has supported tax hikes, extolled the virtues of single-payer health care, and wants to fund Planned Parenthood can be leading in a Republican primary when they’re saying all the things focus groups and pollsters tell them to say. The answer is easy: They’re conventional; Trump is a boat-rocker. And people, especially in times of unrest, are drawn to boat-rockers.

In his prime, Muhammad Ali could beat any boxer alive today. But put him in a ring with Chuck Liddell, and it’s a different story. Liddell fights differently, and Ali wouldn’t be prepared. Ali might be able to outlast him and ultimately win, but he would take a beating in the first few rounds. That’s what the GOP field is experiencing right now.

That none of those Republicans has adopted even some of Trump’s attitude toward the press and passion on issues such as immigration proves either they are too dependent on consultants and focus groups or they simply do not get it.

Celebrity in the United States is now everything. Progressives have elevated celebrity – whether earned through accomplishment or talent or willingness to make a spectacle of yourself – to the highest order of society. YouTube and Instagram celebrities and other assorted non-entities who garner the support of millions of fans and millions more of their dollars is the new normal.

But it’s a normal that most of the GOP candidates don’t understand, but Donald Trump does. Whatever you think of him, he’s a celebrity first. Name another real-estate billionaire. Can you? Were it not for his TV shows and public feuds in the media, you wouldn’t know his name either.

He’s famous because he’s unapologetic in what he says; he’s popular for the same reason.

Yes, he’s flip-flopped. He’s not all that conservative on many things and not conservative at all on others. But when it comes to what motivates voters most – immigration, confidence, national pride, etc. – no one is more vocal and unflinching than Donald Trump.

It’s not as though his positions on these issues are all that different from many others in the field. It’s how he expresses them.

For decades, we’ve had Republicans apologizing for being Republican or adding qualifiers, such as ‘compassionate,’ as if they are ashamed to be known as conservatives. Trump doesn’t apologize for anything, even when he should. He’s not an unabashed conservative, but he is unabashedly Donald Trump. That’s his appeal.

It’s not as though there’s no substance there, but so far he’s a lot of sizzle and Salisbury steak. What will he do about radical Islamists flooding into the west embedded with refugees? No idea. But no one cares. He’s telling people things are going to get better. He’s the Tony the Tiger of presidential candidates, “It’ll be grrrreat!”

If the other candidates want to win the nomination, they have to become a bit of Tony the Tiger themselves. That does not mean slamming Donald Trump – his supporters take that as further confirmation he is aggravating the right people and instilling pride and confidence in America again.

His speeches are like attending a pep rally; the rest are like listening to a timeshare pitch. They believe in what they are saying for the most part, as does he. But they appear to bore even themselves with the same clichés, catchphrases and safe rhetoric.

You want to beat Trump, the easy way to do it is to simply do it. Forget knocking him down; focus on building yourself up. Ditch the scripts. Fire the consultants. Say what you really believe and what you want to do. Speaking honestly from the heart is much easier than regurgitating talking points.

The easy way to beat Donald Trump is to learn from him and become a better candidate because of it. If none of them can do that, they’d better get in line to support him because they will lose.