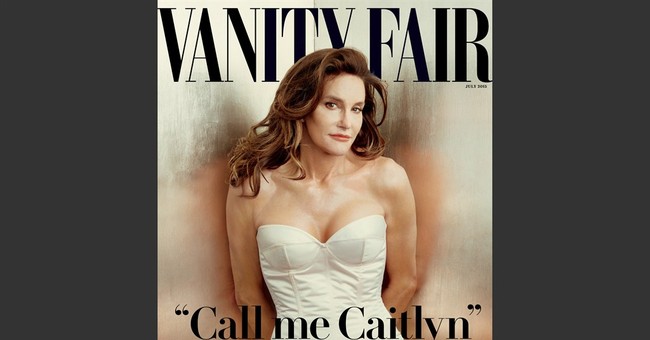 It’s been a slow news week. Nothing much has happened.

Sure, Iran is moving ever closer to a nuclear weapon, several more candidates have announced a run for the White House, and there was a major debate about government spying on the American people. But all that and much more was trumped by a celebrity news story because, well, the mainstream media is awful.

As I wrote this week, “Ten years ago, if you had told anyone the first viable female major political party candidate for president would wear fewer dresses than the winner of the 1976 Olympic men’s decathlon, you would’ve been met with laughter. Yet that’s exactly where we find ourselves today, and it’s being treated as if it’s the cure for cancer.”

The media not only is awful, it’s also awfully predictable. If, of course, it in any way advances a progressive narrative, nothing else matters and no holds are barred.

The media is an ADD fruit fly, fluttering from one shiny object to the next with no regard for whether something is actually important and no ability to prioritize based on newsworthiness.

Remember Baltimore? Sure, you heard about the riots and probably about the number of murders in the month of May, but that’s about it. There weren’t live remotes, breathless monologues or “social justice warriors” chastising uninvolved Americans for their failures. Should the number of murders in June drop, you probably won’t hear about Baltimore until the six police officers charged in Freddie Gray’s death are arraigned in early July. The media has moved on.

In this case, the cameras have moved on to the continuing adventures of Bruce Jenner, something so insignificant on the scale of what matters in the world as to not register. But millions of words, thousands of trees and hundreds of hours have been spent discussing something that will create no jobs, arrest no terrorists or change the lives of anyone not directly involved.

Jenner will become richer, his kids (especially the ones who’ve shunned the spotlight) will be hounded by media, and you’ll still have to go to work in the morning.

There used to be a line between “news” media and “entertainment” media. That line has disappeared like it was cocaine, and the Ozzy Osbourne of 30 years ago blew through town on a particularly bad bender.

The agenda of the mainstream media remains the same; progressive, leftist and in-line with the Democratic Party. It didn’t die; its tactics evolved.

Where they used to focus on policy fights from the left-wing perspective, progressives realized the American people never would come around to their side. So they changed the focus.

Now social issues are all the rage.

Magicians master the art of sleight of hand and the mouth. While their hands hide the ball or take your wallet, their mouths keep running to keep you distracted. The American people are the mark for the progressive media.

An honest media never would pay more attention to a former Olympian’s personal life, let alone his family made famous only by a sex tape, than to a shrinking economy or a fascistic state marching toward the bomb with the help of our leader’s ineptitude. But we don’t have an honest media. Cities molded over decades in the image of a progressive Utopia, ruled singularly by Democrats, seeing bodies piled upon bodies would be more important than the sexual surgical whims of any person … if we had an honest media.

A truly honest media never has existed, but members of it at least used to pretend to be unbiased. That “ethic” went the way of the dodo not because of some master plan but because we, as a society, began elevating celebrity to the point of near cult status. Not all of us, but far too many, care more about what no-talents do and say because they’re on TV, make music or are in movies. It only metastasized from there to anyone who could get our attention, no matter how they did it and no matter what they did afterwards.

No, we can’t blame the media’s saturation of the Jenner story, or any of the garbage they cover, on them, just like we can’t blame the nation’s obesity problem on forks. We’re the ones lapping it up. If we don’t tune in, if we don’t buy the magazines, even the most dedicated activist news outlet will alter its coverage. As it stands, even conservative outlets have fallen into this trap, as have I.

It used to be “if it bleeds, it leads.” Given the news this week, and the state of the news business in general, and considering that the NFL has abandoned it, maybe we just call how the media operates now the new “tuck rule.” The important stories are tucked under the rest.