The Real Lesson From The Life And Death Of Freddie Gray 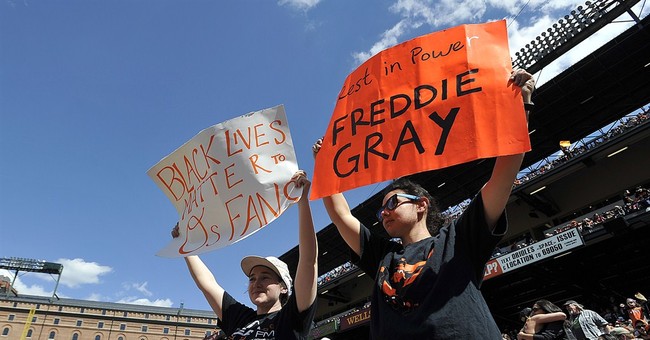 Having lived in Baltimore for 13 years and working now as host of a daily radio show on WBAL, the biggest station in the state, I’ve seen first hand the destruction of the past week, and the past few years. Having grown up in Detroit, I’ve seen what lies further down the road my city is traveling, and it’s not pretty.

A who’s who of Maryland Democratic Party politics turned out for the funeral of Freddie Gray, the 25-year-old Baltimore man who died from a severed spinal cord injury that apparently occurred while in police custody. Baltimore Mayor Stephanie Rawlings-Blake was there, as was the woman she succeeded, Sheila Dixon. Congressmen Elijah Cummings and John Sarbanes were there, as was former Rep. Kweisi Mfume, a former president of the NAACP. The Obama administration even sent two representatives. While all in attendance mourned the loss of Gray, none were willing to address the real problem his short life exposes.

The death of Freddie Gray is a sad end to a sad life that involved everything you’d expect from a life lived in poverty in a major urban area. But his death, and his life, were the result of what far too many big cities are doing to (not for) their residents.

Freddie Gray was raised in poverty, educated in failing schools, thrust out into an economy choked by regulation and taxes, and offered only drugs as a way to earn money.

Baltimore has been controlled by Democrats since the 1960s. The economy, the education system, the business environment and climate of criminality are all pieces of what they built – a machine that churns out Freddie Grays en masse on an annual basis.

Freddie Gray was pushed through the failed Baltimore education system, learning nothing of practical use and not being prepared for college or a trade. He was thrown into an economy hemorrhaging jobs and businesses because taxes and regulations disincentivize the retention and creation of businesses. The only growth industry hiring was drugs.

Freddie Gray made his choices, but the progressive big government machine he was born into limited those choices.

That machine has churned out many of the people who took to the streets of Baltimore to riot on Monday. Many of them will suffer the same fate as Freddie Gray, though at the hands of their peers, not the police.

The answer pushed by progressives, all the way up to President Obama, is to make the machine bigger.

The president said Tuesday, “In communities where there are no fathers who can provide guidance to young men; communities where there’s no investment, and manufacturing has been stripped away; and drugs have flooded the community, and the drug industry ends up being the primary employer for a whole lot of folks — in those environments, if we think that we’re just going to send the police to do the dirty work of containing the problems that arise there without as a nation and as a society saying what can we do to change those communities, to help lift up those communities and give those kids opportunity, then we’re not going to solve this problem. And we’ll go through the same cycles of periodic conflicts between the police and communities and the occasional riots in the streets, and everybody will feign concern until it goes away, and then we go about our business as usual.”

We’ve spent $20 trillion in the “war on poverty,” and we still have the same rate of poverty. Because that money was not spent to help those in poverty; it was spent on government bureaucrats to administer “benefits” to those in poverty.

Don’t get me wrong: Cutting a check would have been destructive too, but it is in the administering of those programs that we find the chains that hold people in poverty.

Like the tax code for taxpayers, if you live how the government approves, your “benefits” will continue. Stray from the approved life and they will be cut off. Get a job and you risk losing money you’ve been conditioned to rely on. Get married, forget it.

The president remains a dedicated ideologue to the progressive welfare state. He said, “And there’s a bunch of my agenda that would make a difference right now in that.” He listed early education for children in poverty as one of his “solutions.”

Additional years in the machine would not have saved Freddie Gray, and it will not save any child grinding through its gears. Liberation from that machine is the only hope.

Even if the machine freed kids from the education system and offered school choice, without wholesale dismantling of the progressive machine there will be no jobs awaiting even qualified and well-educated graduates.

In short, without an across-the-board rejection of the hollow promises of progressivism, Freddie Gray’s death will mean nothing. Electing new people to do the same things will yield the same results. It isn’t just the people, the politicians and their false promises of change, it’s the ideology they swear allegiance to.

The worst school districts in the country are controlled by teachers unions and overseen by progressive Democrats. They are also among the most expensive school districts in the country. More money would only make them more expensive, not better. Yet that is the “solution” being offered by progressive Democrats. That’s like the captain of the Titanic ordering his ship to speed up and hit the iceberg faster and thinking that would make it better.

Unfortunately for Baltimore, and every other major city looking down the barrel of the same fate, more of the same is the mostly likely plan. The only people who can rise up and make the changes in leadership necessary to restore liberty and the opportunity and dignity that come with it are products of the same machine that produced Freddie Gray and those who soiled his memory by looting armloads of toilet paper and beer from the few stores willing to serve their communities … even though those communities turn on them the moment the opportunity presents itself.