Ebola In America: Is The Government Doing Enough? 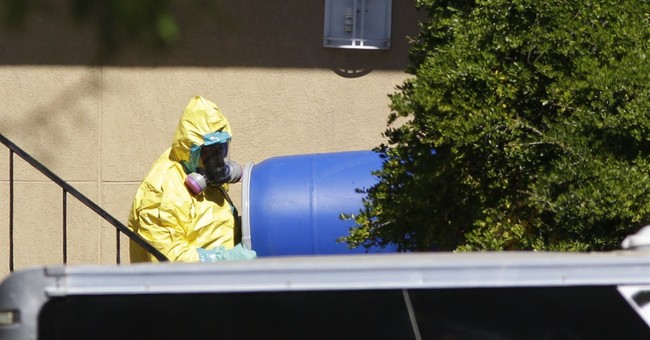 I’m writing this with Ebola-type symptoms. I don’t have Ebola;, I have food poisoning. But still. The world is not yet in panic mode over the latest outbreak, but it’s close. Is it justified?

Ebola isn’t an easy virus to contract, or at least it didn’t used to be. The only sure way to catch it is from the bodily fluids of people with it – and then only once they start to exhibit symptoms themselves. That’s why it’s been the near-exclusive domain of countries without proper sewage treatment, clean water and general hygiene amenities we in the West are fortunate enough to take for granted.

What makes this current outbreak so concerning is how many trained medical professionals have contracted it.

These doctors, nurses and other health care professionals are not being reckless; they know what they’re up against. They take all the precautions that have worked in the past. So how are they getting it? How are so many civilians who are taking all the prescribed precautions getting it? We don’t know.

Officials from the Centers for Disease Control and the World Health Organization assure the public this is nothing to be concerned with, but what they can’t do is explain how people in protective gear catch it.

I don’t have the answer. No one does. I just hope the people whose job it is to come up with it do so soon.

Viruses mutate. What once wasn’t airborne can become airborne. What used to survive only moments outside the body can change to thrive outside it. These changes can happen quickly, or not at all. Pretending to know what happened with a virus is folly.

Is Ebola worthy of panic? Not right now. But it is worth concern. If this current strain has mutated, or is in the process of mutating, waiting to take action is the worst thing we can do.

The government can and should impose travel restrictions from Ebola-infected areas. The Obama administration so far has refused, but there is no sensible reason not to.

The director of the CDC, Tom Frieden, claimed this week that, “Even if we tried to close the border, it wouldn’t work. People have a right to return. People transiting through could come in. And it would backfire, because by isolating these countries, it’ll make it harder to help them. It will spread more there and we’d be more likely to be exposed here.”

Maybe I’m not smart enough to understand how that works, how stopping travel from countries with an outbreak would cause more outbreaks here, but that’s the administration’s line.

The mishandling of the first Ebola patient not imported to the U.S. for treatment, Thomas Eric Duncan, shows just how woefully unprepared the United States is to deal with it. A patient who should have raised every red flag and set off all the alarm bells the system claimed to have, didn’t.

Duncan should not have been allowed to enter the country, but it appears the only safeguard for checking if someone from Liberia has been in close proximity with an Ebola patient is the honor system. Duncan now faces charges in Liberia for lying on his form, but he has to live to face them. The risk, for him, is well worth it. The risk for us is clear.

The reports of patients around the country being tested and isolated under suspicion of Ebola are growing, but some of that is merely being overly cautious. But over-cautiousness is exactly what’s needed in this situation. That it happened once means it can happen again.

With all of this happening, the president of the United States is focused on the election, a West Coast fundraising trip and spending an inordinate amount of time pandering to Hispanics on amnesty. In other words, Barack Obama is being Barack Obama the ghost.

I could take the Ebola threat a lot less seriously if I had the sense the government, from the president on down, was taking it seriously enough.