Debra J. Saunders
|
Posted: May 22, 2016 12:01 AM
Share   Tweet
The opinions expressed by columnists are their own and do not necessarily represent the views of Townhall.com. 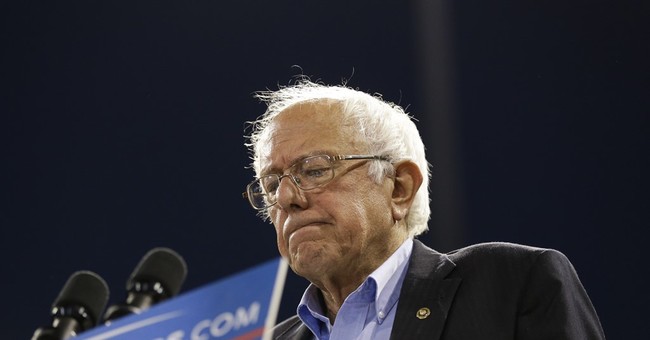 On Wednesday, Bernie Sanders had lunch at the Chieftain, a cozy pub near the San Francisco Chronicle. In days gone by, it served as a lunch spot for parched journalists. Earlier, Sanders had addressed a rally in San Jose; he had another scheduled in Vallejo, California, that night. When he exited the Chieftain by a back door onto Howard Street, passers-by shouted out his name.

A man who hailed Sanders as his "hero" asked the Democratic presidential hopeful to pose for a photo. There were more selfies with more fans who could not believe their luck in stumbling upon a potential president. No jacket, no tie, two pens in his shirt pocket, Sanders took his time heading toward the motorcade.

I had raced down Fifth Street to catch the scene. After all, how often do San Franciscans have a chance to see one of the three top remaining candidates in a presidential race mingling with strangers? Supporters didn't have to pay $250 to $27,000 for a ticket that would put them in a banquet hall with front-running Democratic presidential candidate Hillary Clinton. Clinton also has held some rallies open to the public and free, but her modus operandi is hardly strictly grass-roots.

In those few moments, it was easy to see why Sanders has caught on with young voters. As Sanders told Chronicle staff writer Joe Garofoli on Wednesday, "if you want a candidate who is out working and speaking with people rather than hanging out raising money from millionaires, I think the choice is pretty clear."

The choice between Sanders and Clinton is stark: Rumpled versus professionally styled. Poll-defying versus poll-tested. "One of the poorer members of the U.S. Senate" versus one half of a $111 million-net-worth couple. Insurgency versus establishment. Enthusiasts versus operatives.

At the Chronicle editorial board this month, Sanders was personable, but he was disappointing on substance. And it had happened before.

On April 1, Sanders met with the New York Daily News editorial board. He stumbled over questions about how he would break up the big banks. "How you go about doing it is having legislation passed or giving the authority to the secretary of treasury to determine, under Dodd-Frank, that these banks are a danger to the economy over the problem of too-big-to-fail," he answered. Probed further, Sanders said he didn't know whether the Federal Reserve has the authority to break up the banks, but he thought the administration "can have" that power. In other words, he had given little thought to the mechanics and had no plan to execute his big dream. He failed to demonstrate even the slightest understanding as to which agencies have the authority to do what he wants done or how a bank breakup might affect the economy of (say, just for the sake of argument) New York.

The Washington Post's Chris Cillizza described the meeting as "pretty close to a disaster," with "the Daily News pressing Sanders for specifics and asking him to evaluate the consequences of his proposals, and Sanders, largely, dodging as he sought to scramble back to his talking points."

By the time Sanders made it to San Francisco, he was on notice that editorial boards expect more thoughtful answers. He had more than a month to bone up on his signature issue. But when the Chronicle's business editor, Owen Thomas, asked Sanders whether he would break up Wells Fargo, Sanders said he could not answer definitively. He moved to his talking points -- "three out of four of the largest banks today are bigger than they were when we bailed them out because they were too big to fail" -- railing against the revolving door. He asserted that Section 121 of Dodd-Frank gives the treasury secretary the power to "determine which banks, if they failed, could cause systemic damage to our economy" and that he "would break them up." But according to Fortune magazine, that provision gives that authority to a large board on which the treasury secretary sits.

Maybe it's just me, but shouldn't a man who has been railing against the big banks from sea to shining sea know which banks are so big that he would have to sic the government on them to pare them down to size? Sanders boasted that he would not name a treasury secretary who has worked at Goldman Sachs. The question is: Would he appoint someone who understands how Goldman Sachs works?

Likewise, Sanders had no real plan to work with Congress to push through the legislation to advance his revolutionary goals. He said he has learned that it is impossible to work with Republicans. But no worries. If voters send him to the White House, then there will be a "political revolution" that pressures Congress to work with him.

That tells me that if elected, Sanders is destined to fail.

He hits Clinton for being too close to Goldman Sachs -- and he's right. So how does he work with Democrats in Congress?

I've talked to people who watched the video of Sanders meeting with the Chronicle editorial board. They have asked me why campaign staffers didn't do a better job of prepping the candidate. Actually, that should not be necessary. Sanders has been a member of Congress since 1991. Income inequality is his pet issue. He should not need staff to explain to him what banks are doing wrong and what the government can do to correct the imbalance.

Electing Sanders to fix what ails Wall Street would be like hiring me to fix your car.