Sanctuary City Is a Haven for Felons 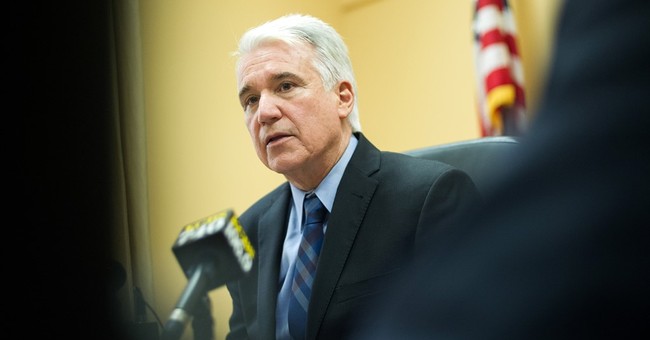 As he runs for re-election in November, San Francisco District Attorney George Gascon faces no opposition. The cozy position was unlikely, when you consider that Gascon arrived in the city as a pro-death penalty Republican from Arizona in 2009 after then-Mayor Gavin Newsom picked him to be chief of police. Today he's the rare prosecutor who has sent a message to career criminals in the country illegally: San Francisco will make the feds really work to deport them.

In 2011, after then-Ess Eff District Attorney Kamala Harris won the race to be California's attorney general, Gascon was Newsom's choice to replace her. By then, Gascon no longer was a Republican. He no longer supports the death penalty. He does support San Francisco's sanctuary city policies -- including the city's 2013 Due Process for All ordinance, which prohibits city law enforcement from honoring federal Immigration and Customs Enforcement detainer requests except for inmates who have been convicted of a violent felony in the past seven years. "I think it's good public policy," he told the San Francisco Chronicle's editorial board Friday.

Gascon may be to the left of the Board of Supervisors on this issue. At least, I hope he is. Supervisor Mark Farrell has been working to fix the 2013 ordinance in the wake of the July 1 shooting of Kate Steinle on Pier 14. The ordinance appears to have played a role in that awful killing. The accused shooter, Juan Francisco Lopez-Sanchez, is an immigrant in this country illegally who has seven felony convictions and has been deported five times. He was sent by the feds to San Francisco on a decades-old marijuana charge. When the district attorney rightly dropped the charges -- the case was too moldy to win -- Sheriff Ross Mirkarimi released the Mexican national rather than notify ICE. Lopez-Sanchez, who is now charged with murder, has pleaded not guilty in the shooting -- although he has told the press that he found the gun that killed Steinle on the pier that day.

Ever since Steinle's death, Mayor Ed Lee has argued that Due Process for All never prevented the sheriff from notifying ICE. Gascon stressed that any remarks he made about the ordinance have nothing to do with charges against Lopez-Sanchez, but the sheriff should demand a warrant (as opposed to a detainer request) from ICE. To San Francisco's top prosecutor, it's "good public policy" to set up hurdles that make it harder to deport career criminals who do not belong in the United States.

Gascon also opposes minor reforms to Proposition 47, the 2014 ballot measure approved by 60 percent of the electorate that downgraded many property and drug crimes from felonies to misdemeanors. Some cops and prosecutors say the measure turned misdemeanor arrests into a "catch and release" exercise that is driving up property crimes. An early champion of Prop 47, Gascon chastised his law enforcement critics for being "addicted to incarcerating people." He suggested law enforcement look for "the underlying problems" that lead someone to, say, steal a car. It's a plus when a prosecutor talks about being smart about punishment. But who feels safer when a district attorney talks like a social worker?