D-Day in Poetry and Prayer 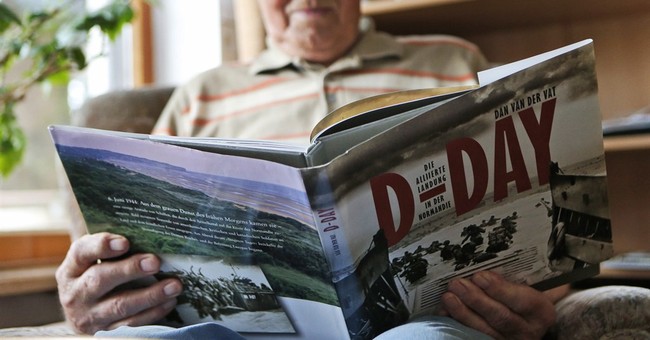 Nearly one hundred years ago, the late poet Robert Frost penned the famous lines: “Two roads diverged in a wood, and I—I took the one less traveled by, and that has made all the difference.”

His metaphor has endured as testament to the importance of making choices based on factors other than superficiality and popularity.

Shortly after Frost’s death in 1963, President John F. Kennedy traveled to Amherst College in Massachusetts, where Frost had taught for many years, to deliver a eulogy about the famous wordsmith he had invited to participate in his inauguration. That day, Kennedy shared a line that, like Frost’s about those fabled two roads, has since morphed into something beyond its original intent and focus. In my opinion, it was one of the best things Kennedy ever said:

Next to ingratitude, forgetfulness is the most serious indicator of cultural decline. The two are intertwined. Thankfulness and remembrance are flip sides of the same precious cultural coin. On this day—the seventieth anniversary of one of the greatest moments in history—we must reject the defeatism and cynicism so characteristic of our times and look back at heroes proved, and up at Almighty God in gratitude for them.

If the idea of gratitude toward God is off-putting to anyone—or seems somehow inappropriate, I would simply note how a famously liberal Democratic President approached matters on national radio seventy years ago. Roosevelt became America’s pastor for a moment and prayed:

"Almighty God: Our sons, pride of our Nation, this day have set upon a mighty endeavor, a struggle to preserve our Republic, our religion, and our civilization, and to set free a suffering humanity. Lead them straight and true; give strength to their arms, stoutness to their hearts, steadfastness in their faith..."

And he ended with: “Thy will be done, Almighty God. Amen.”

Elisha “Ray” Nance, who died a few years ago, was well known around Bedford, Virginia, a picturesque town located at the foot of the Blue Ridge Peaks of Otter, where for years he delivered the mail on nearby rural routes. But it was for what he did before becoming a letter carrier that he is best remembered.

Ray was one of “The Bedford Boys.”

He was the last of his town’s contingent in Company A of the 29th Infantry Division’s 116th Infantry – a group that waded ashore seven decades ago on a beach nicknamed Omaha in a far away place called Normandy in France. And of the thirty soldiers from Bedford (population then, about 3,200), he was one of only eight from his hometown who lived to tell the story.

Ray lost twenty-two Bedford buddies that day, nineteen of them in the very first moments of the battle. By the time he made it to the beach in the last of his company’s landing crafts, he saw “a pall of dust and smoke.” He could barely see “the church steeple we were supposed to guide on.” He couldn’t see anyone in front, or behind him—only that he “was alone in France.”

Mr. Nance was a hero “proved through liberating strife.”

Thirty years ago, on the fortieth anniversary of D-Day, President Ronald Reagan captured the attention of history and honored some of the other “Boys” who did so much for all of us on June 6, 1944. He called them “The Boys of Pointe Du Hoc,” and many of them were in his cliff-top audience in Normandy that day in 1984.

If you wanted to pick a more unlikely place for an important military attack, you’d be hard-pressed to come up with a spot more uninviting than the imposing, rugged cliffs overlooking the English Channel four miles west of Omaha Beach. A few years ago, I had the privilege of visiting the Normandy region for a speaking engagement. I stood on the spot where the Great Communicator spoke and tried to wrap my mind around the quite-evident impossibility of what the United States Army Ranger Assault Group accomplished that fateful day. Mr. Reagan honored those men there:

But the boys of Bedford are now all gone. And noble ranks of the boys of Pointe Du Hoc have been thinned out by the course of time as well. Other heroes have taken their place and are equally worthy of our gratitude and honor.

Kennedy was right—how we remember heroes of the past, and how we treat heroes in our day, reveals the heart and character of our nation.

Reagan was right, too: “Strengthened by their courage, heartened by their valor, and borne by their memory, let us continue to stand for the ideals for which they lived and died.” Amen.