David Limbaugh
|
Posted: Sep 16, 2016 12:01 AM
Share   Tweet
The opinions expressed by columnists are their own and do not necessarily represent the views of Townhall.com. 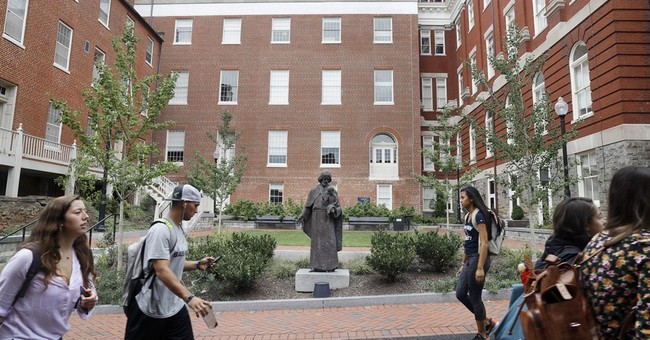 Most of us have heard about "white privilege," "trigger warnings," "microaggressions" and "safe spaces." Let me provide rough definitions from an online dictionary and other websites. I'm sure that I could be accused of a microaggression for failing to be more precise, but I'm trying.

White privilege is the notion that whites have an advantage in getting societal benefits in Western countries, to the disadvantage of nonwhite people under the same social, political or economic circumstances. Trigger warnings are communications warning that the content of a text, video, etc., might upset or offend some people, especially those who have previously experienced a related trauma. Microaggressions are subtle but offensive comments or actions directed at a minority or other non-dominant group, often unintentionally or unconsciously reinforcing a stereotype. The original idea of safe spaces was that educational institutions should not tolerate anti-LGBT violence, harassment or hate speech. Therefore, certain places were designated as safe for all lesbian, gay, bisexual and transgender students. The term has been expanded to protect all minorities.

Last year, just a few days before Halloween, there was a firestorm involving these concepts when a Yale University professor responded to an email sent to students by the university's Intercultural Affairs Council. The council had advised students not to wear costumes that would "threaten (the) sense of community" there.

Some students and faculty members took umbrage to the email because they considered it patronizing and also unnecessary because, in their view, it "had no applicability to the culture and the actual history" at Yale. But when professor Erika Christakis -- who was also an associate master of Silliman, one of Yale's residential colleges -- took exception to the email in her own email to Silliman students, many students, sadly, didn't receive Christakis' message with good cheer. Christakis wrote, "Have we lost faith in young people's capacity -- in your capacity -- to exercise self-censure, through social norming, and also in your capacity to ignore or reject things that trouble you?"

Instead of applauding her for vouching for their maturity, they interpreted it as inviting insensitivity to the experience of minorities. Some 700 people, including students, faculty and alumni, fired off an open letter in response to Christakis' email, saying, "In your email, you ask students to 'look away' if costumes are offensive, as if the degradation of our cultures and people, and the violence that grows out of it is something that we can ignore."

Christakis' husband, Nicholas, who was the master of Silliman, made the mistake of meeting with students and not sufficiently throwing his wife (and himself) under the bus for her email. Nicholas met with a large group of students, who surrounded him in the residential college quad. The encounter was captured on four videos, totaling some 24 minutes, and I watched the entire thing (titled "Yale Students and Nicholas Kristachis" on YouTube). To me, it is appalling and horrifying.

Christakis calmly, respectfully and cordially responded to one student after another, most of whom treated him with utter contempt and disrespect, used invectives, and demanded an apology for his wife's email. Several rebuked him for not remembering their first names from his previous interactions with them. When he acceded to their demands to say he was sorry for hurting their feelings and the pain it had caused them, they were unmoved. When they further demanded that he also acknowledge that the email created "space for violence to happen" and apologize for it, he drew the line, saying, "That I disagree with."

One student then said, "It doesn't matter whether you disagree." Another launched into an endless rude diatribe, and when Christakis tried to calmly respond when she'd paused, she cut him off, saying he shouldn't get to speak.

You will have to watch the video to get the full flavor of how hateful it was, how unreasonable the mob of students was and how patiently and calmly Christakis tolerated their bullying.

Shortly thereafter, about 1,000 students conducted a "March of Resilience" against an "inhospitable climate for people of color on campus." Then a smaller group submitted a list of demands to the university's president. It said the school must immediately implement "lasting policies that will reduce the intolerable racism that students of color experience on campus every day." Among other specific demands were that all undergraduates be required to take courses in the "Ethnicity, Race, and Migration" program, that mental health professionals be permanently established in each of the four cultural centers with discretionary funds, that the annual operational budget for each such center be increased by $2 million and that the Christakises be removed from their positions as master and associate master of Silliman College.

Believe it or not, despite the fact that there were no documented examples of racism giving rise to their complaints, the university surrendered and granted most of their demands.

Much has been written about the danger to free speech such events represent. There is no question that is the case. But I am far more concerned with what they reveal about the state of race relations in this country -- at least on college campuses -- and the messages we are sending to young people, namely:

--They are too fragile to deal with perceived, let alone actual, adversity.

--If a charge of racism is leveled against a "non-minority," it must be presumed valid, and the accused won't even be allowed, in some cases, to explain or deny it.

--Any perceived slight must be addressed, and all demands must be satisfied, no matter how unreasonable.

--We must be forever obsessed with race, gender and sexual preferences.

--Rudeness and disrespect will not be punished but will be rewarded.

Is it not obvious that a flagrant contradiction underlies these complaints? Those crying "racism" and "sexism" demand that they be treated equally and nondiscriminatorily, yet virtually every demand they make screams just the opposite. How can we be colorblind and color-obsessed at the same time?

Many people don't have the courage to address these issues, because they fear the mob would descend on them if they dared to challenge its claims. Yes, but if we keep pretending that the mob's claims are true and rolling over, things will only get worse. When can it possibly end?