The Jury Is Still Out

David Limbaugh
|
Posted: May 06, 2016 12:01 AM
Share   Tweet
The opinions expressed by columnists are their own and do not necessarily represent the views of Townhall.com. 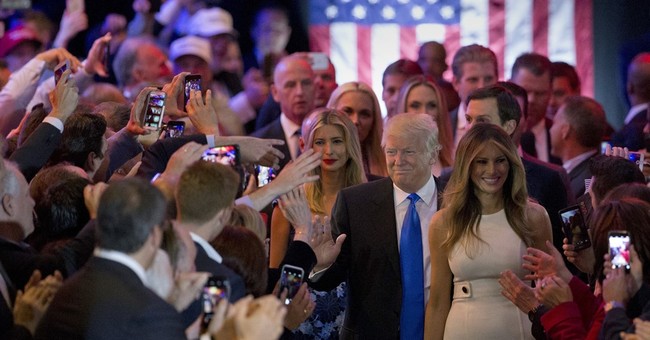 Trending
Where am I with the #NeverTrump movement? Well, I almost never say "never." Notice I qualified that "never" with "almost."

I have said consistently throughout this campaign that I would support the Republican Party's nominee. As the campaign has progressed, I've also said it would be increasingly difficult to honor that pledge.

This has nothing to do with sour grapes. Though I supported Rick Santorum in 2012, I full-throatedly endorsed Mitt Romney when he captured the nomination, realizing he is a decent man and light years better than Obama. In 2008 I ended up holding my nose for John McCain.

This year is different. Not only was I supporting the best Reagan conservative since Ronald Reagan, but his primary opponent is more objectionable than most GOP candidates in my lifetime.

Admittedly, Hillary Clinton is the worst Democratic nominee since Obama and could be a worse president. She could complete Obama's fundamental transformation of America.

So, this should be an easy choice -- Donald Trump can't be as bad as Hillary Clinton, so it's a no-brainer, right? It's not that simple.

I am extremely bothered by the way Trump conducted himself during this campaign. There's no point in ticking off the list of offenses, but they are legion, culminating in his endless "Lyin' Ted" mantra and his suggestion that Ted's father, Rafael Cruz, was involved in JFK's assassination. There are just no words.

As much as I'm concerned with Trump's fitness for office, character, temperament, integrity and common decency, there are other considerations that might end up being more determinative.

Beyond a few issues, I don't believe Trump is a conservative -- many of his instincts are liberal -- and many of his supporters are disgusted with mainstream conservatism and fools like me who persist in clinging to it.

Trump is not ideological. But he's struck a chord with many people on the right, or the "alt-right," as they proudly call themselves, on certain core issues, primarily immigration and trade -- oh, yes, and he's an outsider and successful businessman "who knows how to get things done."

I understand consumer taxes, aka tariffs, appeal to those who've lost their jobs, though I disagree they are the remedy. But I am a bit surprised that he's been as effective as he has been on the immigration issue, given his flip-flops and vacillation. I also understand the people's desire for an outsider, but I don't think it's an outsider we need. Rather, we need someone who actually will take on the establishment (and has a proven track record of doing so).

For the sake of argument, let's concede Trump will build the wall and even make Mexico pay for it. That he'll protect us against illegal immigration in necessary ways beyond just the wall. Let's assume he'll take a no-nonsense approach to leading and will really fight to accomplish his goals.

Is that enough to tip the scales in his favor in the eyes of Reagan conservatives?

That should be an easy "yes" when compared to Clinton in the short term, but what about the long term?

I fear that Trump's ascendancy could result in serious damage to real conservatism, which could have devastating long-term consequences for the United States. (If it were not possible for Clinton to complete Obama's destruction of America in the short run, I probably would just stay home in November.) I also seriously worry about Trump's propensity toward authoritarianism -- let's call it "dictatorship-lite," a concern exacerbated by observing the unlimited capacity of his supporters to excuse anything he does. That is scary to me.

Conservatism is not just a set of ideas, but a philosophy toward governance. It is grounded in a belief in unalienable rights from God that are enshrined in the Constitution and its scheme of limited government that guarantees our liberties like no other nation in world history.

Our nation's main problems are a direct result of the left's ravaging our constitutional scheme and destroying our liberties, not to mention its assault on our ability to defend ourselves as a sovereign nation.

I doubt that Trump has given much thought to the idea of liberty and to the Constitution's role in establishing and preserving it. He might be effective on certain limited areas and he may love America as he says, but he appears to have little understanding of or allegiance to the principles that actually made America great and unique in the first place.

Even this might not be so bad if his supporters weren't fed up with the niceties of constitutional conservatism and committed to the notion that a president's only philosophy should be to kick rear end, protect our borders, start trade wars and stand up to political correctness -- loosely defined.

If Trump wins, does Trumpism also prevail going forward? This matters greatly, because while Trump might implement certain conservative policies, he will very likely dilute and subordinate constitutional conservatism. Henceforth the right wing will be the alt-right. Those who truly believe that constitutional, Reagan conservatism is the only long-term salvation for this nation will be relegated to the back seat. The left will always fight us on this, but do we have to cede the right, as well?

America's founding ideas are not an abstract, utopian myth. They are what have made America unique, and if we abandon them, we will have conspired to surrender America's uniqueness.

I understand the argument that we don't have the luxury of waiting until we can win an election on purely conservative principles and if we don't close our borders we might lose the nation. But that is a false choice, considering we had a candidate in Ted Cruz who would have protected our borders and jealously guarded our founding ideas.

It would be bad enough if Trump supporters would agree to support Trump as a stop-gap measure -- to save the country in times of urgency -- and honor their pledge to thereafter return their emphasis to constitutional principles once things have settled down.. But too many of them are feeling their oats and basking in their triumph, with no intention of returning to conservatism -- ever. Most intend for their nationalism and populism to replace constitutional conservatism forever, and many intend for authoritarianism to replace limited government, which means America may never be the same again.

Even RINOs are on the same continuum as constitutional conservatives. They are to the left of us, but they are ideologically oriented and decidedly to the right of the left. Trumpists don't even seem to be on the ideological continuum, and they have no patience for discussing it. People who do discuss it -- such as our Founding Fathers -- are obstructionist relics and need to be dispatched (figuratively, I suppose).

I am not "NeverTrump" -- I recognize how bad Clinton is -- but I think conservatives should now use what leverage they have to hold Trump's feet to the fire so that we don't lose either way.