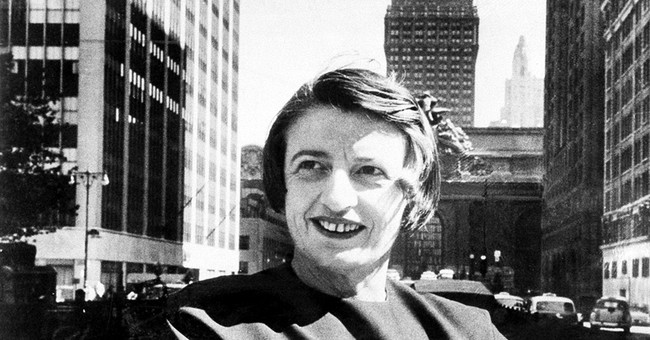 Interest in the bestselling novelist-philosopher Ayn Rand continues to grow, 33 years after her death and 70 years after she first hit the bestseller lists with The Fountainhead. Rand was born February 2, 1905, in St. Petersburg, Russia.

In the dark year of 1943, in the depths of World War II and the Holocaust, when the United States was allied with one totalitarian power to defeat another, three remarkable women published books that could be said to have given birth to the modern libertarian movement. Rose Wilder Lane, the daughter of Laura Ingalls Wilder, who had written Little House on the Prairie and other stories of American rugged individualism, published a passionate historical essay called The Discovery of Freedom. Isabel Paterson, a novelist and literary critic, produced The God of the Machine, which defended individualism as the source of progress in the world.

The other great book of 1943 was The Fountainhead, a powerful novel about architecture and integrity by Ayn Rand. The book's individualist theme did not fit the spirit of the age, and reviewers savaged it. But it found its intended readers. Its sales started slowly, then built and built. It was still on the New York Times bestseller list two full years later. Hundreds of thousands of people read it in the 1940s, millions eventually, some of them because of the 1949 film starring Gary Cooper and Patricia Neal, and many of them were inspired enough to seek more information about Ayn Rand's ideas. Rand went on to write an even more successful novel, Atlas Shrugged, in 1957, and to found an association of people who shared her philosophy, which she called Objectivism. Although her political philosophy was libertarian, not all libertarians shared her views on metaphysics, ethics, and religion. Others were put off by the starkness of her presentation and by her cult following.

Like Ludwig von Mises and F. A. Hayek, Rand demonstrates the importance of immigration not just to America but to American libertarianism. Mises had fled his native Austria right before the Nazis confiscated his library, Rand fled the Communists who came to power in her native Russia. When a heckler asked her at a public speech, "Why should we care what a foreigner thinks?", she replied with her usual fire, "I chose to be an American. What did you ever do, except for having been born?"

George Gilder called Atlas Shrugged “the most important novel of ideas since War and Peace.” Writing in the Washington Post, he explained her impact on the world of ideas and especially the world of capitalist ideas: “Rand flung her gigantic books into the teeth of an intelligentsia still intoxicated by state power, during an era when even Dwight Eisenhower maintained tax rates of 90 percent and confessed his inability to answer Nikita Khrushchev's assertion that capitalism was immoral because it was based on greed.”

Rand’s books first appeared when no one seemed to support freedom and capitalism, and when even capitalism’s greatest defenders seemed to emphasize its utility, not its morality. It was often said at the time that socialism is a good idea in theory, but human beings just aren’t good enough for socialism. It was Ayn Rand who said that socialism is not good enough for human beings.

Her books garnered millions of readers because they presented a passionate philosophical case for individual rights and capitalism, and did so through the medium of vivid, can’t-put-it-down novels. The people who read Ayn Rand and got the point didn’t just become aware of costs and benefits, incentives and trade-offs. They became passionate advocates of liberty.

Rand was an anomaly in the 1940s and 1950s, an advocate of reason and individualism in time of irrationality and conformity. But she was a shaper of the 1960s, the age of “do your own thing” and youth rebellion; the 1970s, pejoratively described as the “Me Decade” but perhaps better understood as an age of skepticism about institutions and a turn toward self-improvement and personal happiness; and the 1980s, the decade of tax cuts and entrepreneurship.

Throughout those decades her books continued to sell -- 30 million copies over the years, and they still move off the shelves. The financial crisis and Wall Street bailouts gave Atlas Shrugged a huge push. A Facebook group titled “Read the news today? It’s like ‘Atlas Shrugged’ is happening in real life” was formed. More than 50 years after publication, the book had its best sales year ever. And sales have remained high – more than a million copies of Rand’s books were sold in 2012.

College students, professors, businessmen, Paul Ryan, the rock group Rush, and Hollywood stars have all proclaimed themselves fans of Ayn Rand. Both The Fountainhead and Atlas Shrugged appear on Barnes and Noble’s list of the top 50 classic bestsellers. In a survey of Book of the Month Club readers for the Library of Congress, Atlas Shrugged actually came in second to the Bible as “the most influential book for Americans today.”

Recently Rand has been the subject of major books, such as Anne Heller’s biography and Jennifer Burns’s study of her ideas, both in 2009, and profiles in USA Today, the Washington Post, the New Yorker, and C-SPAN’s “American Writers” series. We’ve seen a Showtime movie, The Passion of Ayn Rand, starring Helen Mirren; a documentary, Ayn Rand: A Sense of Life, that was nominated for an Academy Award in 1997; and a three-part film adaptation of Atlas Shrugged. She even appeared on a first-class stamp as part of the Postal Service’s Literary Arts series. A quotation from Rand greets visitors to the American pavilion at Walt Disney World’s Epcot Center.

It’s hard to think of a writer more popular – and more controversial – than Ayn Rand. Despite the enormous commercial success of her books, and the major influence she’s had on American culture, reviewers and other intellectuals have generally been hostile. They’ve dismissed her support for individualism and capitalism, ridiculed her “purple prose,” and mocked her black-and-white morality. None of which seems to have dissuaded her millions of readers.

Although she did not like to acknowledge debts to other thinkers, Rand’s work rests squarely within the libertarian tradition, with roots going back to Aristotle, Aquinas, Locke, Jefferson, Paine, Bastiat, Spencer, Mill, and Mises. She infused her novels with the ideas of individualism, liberty, and limited government in ways that often changed the lives of her readers. The cultural values she championed – reason, science, individualism, achievement, and happiness – are spreading across the world.