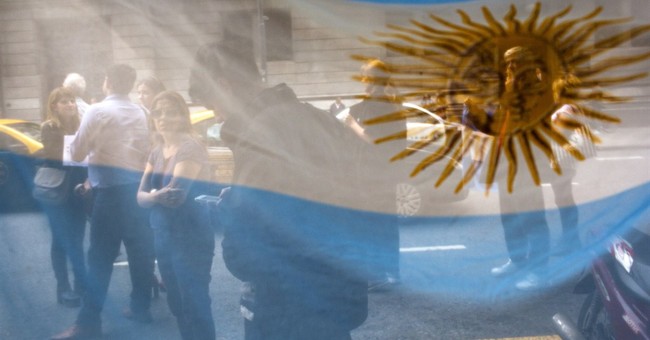 When heads of state become gangsters, something has to be done.” Winston Churchill said that. It’s a proposition not many people nowadays endorse. Fewer still take it upon themselves to stand up to the thugs-cum-statesmen.

Alberto Nisman was an exception – right up until last week when he was found dead, a .22-caliber bullet in his brain. Shocking? Yes. Surprising? Hardly. He and those who knew him (myself included) were always keenly aware that this was possible -- perhaps likely. To say he was courageous would be a gross understatement.

A little background: Mr. Nisman, 51, was an Argentine federal prosecutor, chief investigator of the 1994 bombing of AMIA, a Jewish cultural center, in Buenos Aires. Eighty-five people were killed in that terrorist attack.

In 2006, Mr. Nisman formally accused the rulers of the Islamic Republic of Iran of directing the bombing, and of deploying Hezbollah, Tehran’s terrorist foreign legion, to carry it out.

Argentine courts demanded the extradition of seven Iranians, including former president Akbar Hashemi Rafsanjani, former defense minister Ahmad Vahidi and Iran's former cultural attaché in Buenos Aires, Mohsen Rabbani. Iranian authorities ignored the demand. One year later, Interpol entered the names of five Iranians on its Red Notice list – the closest thing to an international arrest warrant. For the Iranians, it was an irritation and an inconvenience.

Over the years that followed, Mr. Nisman doggedly continued his investigation. Then, in January of 2013, Argentine President Christina Fernández de Kirchner signed an agreement with Tehran setting up a “truth commission” to investigate who was “really” responsible for the bombing. To call that Orwellian would be another gross understatement.

In July, the U.S. House Committee on Homeland Security invited Mr. Nisman to come to the U.S to present testimony. Mrs. Kirchner’s government denied him permission to travel. The hearing took place anyway. An empty chair was reserved for the South American prosecutor.

Finally, this month, Mr. Nisman filed a 300-page criminal complaint with the Argentine Supreme Court accusing Mrs. Kirchner and her foreign minister, Héctor Timerman, of conspiring to cover up Iranian involvement in the 1994 terrorist bombing, of agreeing to negotiate immunity for Iranian suspects and help get their names removed from the Interpol list. Iranian oil was to flow to Argentina in exchange, and Iran was to purchase large quantities of Argentine grain. Mr. Nisman asked a federal judge to freeze millions of dollars of assets belonging to the president and others named in the complaint.

His evidence reportedly included wire-taps of phone calls “between people close to Mrs. Kirchner” and a number of Iranians, including Mr. Rabbani, the Iranian diplomat. It’s worth noting that one of Mr. Rabbani’s agents, Abdul Kadir, is currently serving a life sentence in an American prison for his role in a foiled plot to blow up John F. Kennedy Airport in New York City.

According to the Argentine newspaper, La Nacion, opposition lawmaker Patricia Bullrich said Mr. Nisman told her he also had wire taps of phone calls in which an Argentine intelligence agent revealed details about his family to one of the Iranians charged in connection with the AMIA bombing. “He told me that it was an arrow to his heart,” Ms. Bullrich recalled.

On Sunday, Jan. 18, the night before Mr. Nisman was scheduled to testify before a closed-door Argentine congressional hearing, he was found dead in the bathroom of his 13th floor apartment, a revolver on the floor next to his body.

Mrs. Kirchner was quick to suggest he had taken his own life. "What drives a person to commit such a terrible act?" she posted on her Facebook page. When the evidence appeared to contradict that theory (for example, there was no gunpowder residue on his hands) she asserted that Mr. Nisman had indeed been murdered – but as part of a plot directed at her.

“Prosecutor Nisman's charges were never in themselves the true operation against the government,” she posted. “They collapsed early on.” On Jan. 22, on a personal webpage, she wrote: “Today I have no proof but I also have no doubts. Nisman didn't know and probably never would. They used him while he was alive and later needed him dead. It's that sad and terrible.”

In other words, the waters are being methodically muddied. Over the weekend, it was reported that Damian Pachter, the journalist who first reported Mr. Nisman’s death, had fled Argentina “because my life is in danger.”

The Organization of American States, which claims to be dedicated to the promotion of democracy and the defense of human rights in this hemisphere, has said not a word about the death of Mr. Nisman.

President Obama, deeply enmeshed in negotiations with Iran’s rulers over their ongoing nuclear weapons program, has so far not commented. State Department spokeswoman Jen Psaki has called for a “complete and impartial investigation” into Mr. Nisman’s death, adding that the pursuit of those responsible for the 1994 terrorist attack “must not stop.” Excuse me, Ms. Psaki but can you elaborate? What is this administration prepared to do to ensure that international terrorists and gangsters do not get away with the 85 murders committed in 1994 and the elimination of the prosecutor who attempted to hold them to account in 2015? Anything? Anything at all?