Chris Stigall
|
Posted: Apr 04, 2019 12:01 AM
Share   Tweet
The opinions expressed by columnists are their own and do not necessarily represent the views of Townhall.com. 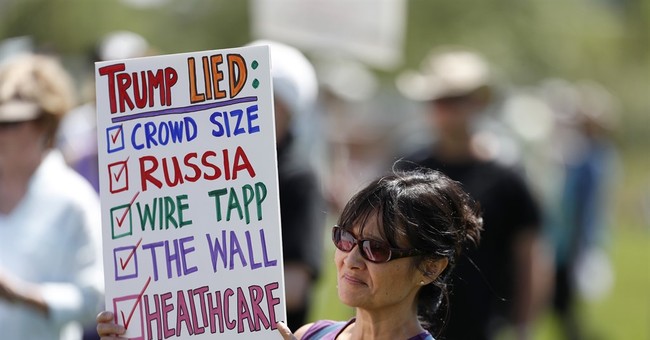 “Welcome to the world, Joe,” President Trump quipped at a fundraiser this week.  The jab targeted at Joe Biden’s recent political storm involving four women who’ve accused the former vice president of unwanted touching.  Of course, “the world” Trump was referring to is the world Biden and his party created.

We live in the era of vagina hats and women’s marches born almost exclusively out of the election of Donald Trump.  I don’t mean feminism, generally.  I mean the new “burn ‘em at the stake” virulence hurled at men accused of any misdeeds with a woman whether it’s true, provable, factual, or not. (Not for nothin’, but most of those accused men are Democrats or liberal Hollywood/media types. Just an interesting side note.)

Before continuing, I need to say I don’t think most men are cads and pervs taking any excuse to cop a feel or worse just because they can.  Most men are quite the opposite, and certainly in 2019.  They’re scared to death to be alone with a woman, never mind touch her inappropriately.

Furthermore, I don’t think most women are wilting flowers who don’t understand the difference between a pervert and a guy who’s trying to be personable.

Today, there’s no grey.  This is the world we live in. The one Trump was joking about.

We all remember Trump’s indelicate comment caught on “Access Hollywood” microphones released before the 2016 election.  Joking to anchor Billy Bush, Trump boasted when you’re famous “they (women) let you grab ‘em by the p____.”

I remember thinking at the time this would be the end of his campaign.  He’d never withstand the comment or the fallout.  Women would never forgive it.  However, I was thinking politically.  Not practically.  When I started hearing from women who’d call my show or comment on social media, I was brought back to reality.

The reality is men joke with other men about good-looking women all the time.  Do most sane people believe Donald Trump ever grabbed a woman in the way he joked?  Of course not.  Do most people agree when you’re a powerful, wealthy, celebrity, there are many women who are all-too-happy to be free with themselves?  Of course.   That’s as old as time.

But let’s bring it back to the plain Johns and Janes of the world and how they interact.  Overwhelmingly, men work overtime to make sure not to offend women in their company.  Overwhelmingly, women aren’t scared to death of a man who touches them on the shoulder or back for a few seconds.

This is not to diminish the severity of rape or true assault in any way.  That’s abhorrent, and any man who abuses women or forces himself on her deserves punishment to the fullest extent of the law.

But that’s not what we’re talking about.  Democrats have decided to take it to the next level.  Every woman is to be believed no matter how baseless the accusations.  No matter a man’s intent or how innocent the incident may seem, it’s only the way his actions made the woman feel that matters.

Leveling with you, I don’t think Joe Biden intentionally gropes people in public to get his jollies any more than I believe Donald Trump grabs p______.  I think one violates personal space rules for sure, but I don’t think he’s a sexual deviant.  The other makes off-color jokes about beautiful women, but I don’t think he assaults them.

Similarly, I don’t think most women assign too much gravity to a man who violates personal space or makes an off-color joke.  I think they get together and roll their eyes about such behavior and make it a point to avoid anyone they’re truly uncomfortable around.  If it’s genuinely unavoidable, they take corrective action.

Bottom line, most women are strong enough to handle it their own way without the national outrage and discussions over “consent” to pat someone on the back.

For instance, my wife isn’t a hugger.  I am a BIG hugger.  My entire family is.  My family greeted her warmly when they first met and still do twenty years later.  Did she ever ask my dad to stop hugging her as a greeting?  Nope, she just does it.  Not because she’s a pushover, and not that my dad wouldn’t stop if she asked him.  She simply knows the intent behind it.

Also, she’s not insane with the constant rage of a liberal, but I digress.

One of my all-time favorite church pastors - a kindly, cherubic man who was always smiling and always made you feel great to be around  - was also a hugger.  As the congregation filed out of service every Sunday, he’d grab your hand, pull you in and squeeze you in a hug.  I loved it.  He felt like a grandfatherly figure to me.  But my wife dreaded the same interaction.

She could’ve gone out another exit.  She didn’t have to stand in line with me at all.  Would the pastor have stopped hugging her if she’d said something? Undoubtedly.  But my wife wouldn’t do that.  Why?  Because she didn’t think our pastor was a predator, and neither did the hundreds of others in his embrace.

In today’s political world, liberals probably view my dad and my former pastor as predatory monsters, too. They likely view my wife as a voiceless victim in desperate need of a vagina-hat wearing champion to defend her.

In the real world where the rest of us live, most liberals could just use a hug.