Are You Still Charlie? 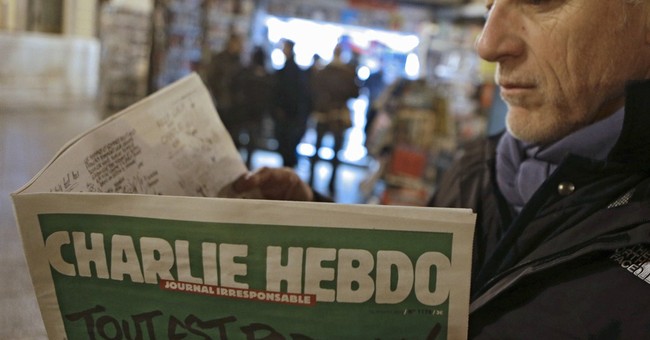 If you have an elephantine memory, you just might be able to cast it back to January 11, and the briefly historic scene in Paris: more than a million people, appalled by the bloodbath murder of staffers at the Charlie Hebdo satire magazine, carried out by Islamic terrorists, marching in the streets of that ancient city.

But that was then. Many people are no longer Charlie. After all, it’s been more than two weeks. Even once vocal Charlies have moved on. On January 27 the Washington Post carried this informative story:

Only two weeks after Facebook CEO Mark Zuckerberg released a strongly worded #JeSuisCharlie statement on the importance of free speech, Facebook has agreed to censor images of the prophet Muhammad in Turkey — including the very type of image that precipitated the Charlie Hebdo attack.

We are alarmingly unable to entertain thoughts pertaining to an existential threat for more than a few days—and this lack of seriousness could herald our doom. Nothing says decadent society quite like forgetting a terrorist massacre within the space of two weeks. The fabulist in the White House is even worse: Indeed, it is likely that he, almost alone of top tier world leaders, wasn’t at the Paris march because he couldn’t bear to acknowledge—even for the length of a few Paris streets—that the terrorism we face has (get this) a radical Islamic element.

While I'm dismayed that we can’t sustain our Charlie-ness longer, one aspect to the Je suis Charlie campaign discomforted me from the beginning and perhaps explains why we moved on with such unseemly haste. When President John F. Kennedy said “Ich bin ein Berliner” in 1963, it was a fresh statement. In it, Kennedy made clear American's commitment to liberty and to protect people from tyrants, in spite of great costs to our nation. They were words that meant something, which is why they were echoed four decades later with President Ronald Reagan’s “Mr. Gorbachev, tear down this wall.” That’s the kind of attention span it takes to safeguard our nation.

By the time of the Paris march, “I am” had become one of the more hackneyed, solipsistic utterances of our therapeutic society. The “I am” statement probably originated from Alcoholics Anonymous’ famous opening declaration, “I am Bill, and I am an alcoholic,” a literally sobering statement that was supposed to free the speaker by expressing an unpleasant truth. But it has degenerated. “I am L-I-S-A, and I have C-O-P-D,” says a woman in an advertisement on TV. She is promoting a drug she spells out as B-R-E-O. The “I am” statement is now annoyingly commonplace as an advertising slogan or a feel-good mantra.

The “Je suis Charlie” line grew out of this rickety therapeutic foundation, and just saying it was enough for many Charlies: I’ve said it, I feel better already. One fears that was really the end of it, rather than the beginning of an awakening to the dangers that lie in wait for western society. Of course, the history of recent times is littered with such awakenings, after which we went back to sleep. Wasn’t 9/11 the awakening of all time? Yet, we are continually shocked when there is fresh evidence of radical Islamic hatred for our values. The Boston Marathon massacre caught us unawares, as did the Charlie Hebdo attack. But now we feel better and are no longer Charlie.

We see this happen again and again. When two hundred young women in Nigeria were kidnapped by the blood thirsty Boko Haram terrorist organization, the U.S. promoted a hashtag campaign with the slogan #BringBackOurGirls. Mrs. Obama was seen prominently displaying the slogan. It was a show of concern, of solidarity, but to what actual end? The girls have not been brought back, some are dead and most have likely been at the very least raped, and Boko Haram has continued to kidnap and murder. But #BringBackOurGirls, now conveniently forgotten, felt as good to its hashtag army as “Je suis Charlie” felt two weeks ago to all the now former Charlies.

If we are to survive, we must digest unpalatable truths and not distract ourselves with trivia. George W. Bush recognized instantly on September 11, 2001 that we were engaged in a long war. It was that recognition that made him one of the most unpopular presidents in history when he left office. We can argue the rightness or the wrongness of the Iraq invasion, but Bush’s immediate knowledge that a long war had begun was probably enough to make him hated. We elected as Bush’s successor a man who could say with a straight face, on the day of a coup in Yemen, that “the shadow of crisis” had passed.

Charlie Hebdo was a nasty, nihilistic little magazine. But in the wake of the massacre we owed it our steadfast support because in the west we know the liberating value of satire, even if we don’t particularly like particular instances of satirical expression. So it is with great sadness that I must say that Charlie Hebdo is…no longer Charlie.

In its first issue after the massacre, now a collector’s item, Charlie Hebdo’s cover featured a weeping Mohammad with the words “Tout est pardonne”—all is forgiven. The concept was muddled: it is not clear, at least to me, whether it is Mohammad or the remaining staff of Charlie Hebdo doing the forgiving. I’d rather have seen them put out a cover with this slogan: “We will never forget.”

But we have already forgotten.