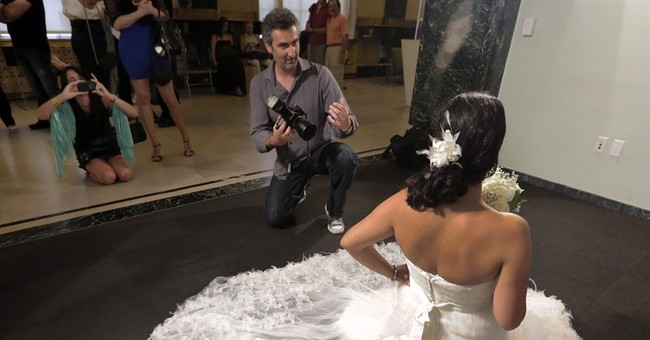 Much is being made of the latest report from the Census Bureau on divorce in America. Using data from the American Community Survey, Census records show that the rate of divorce is increasing for the third straight year in 2012. The overall implication is that as the economy gets better, couples are more apt to call it quits. So this becomes a counter-economic indicator, which is greeted with a certain degree of glee, and less sadness at the diminishing importance of staying married.

But going a step further, it's known that married households are the richest households, so we may want to hold off on throwing rice and toasting the unhappy couple finding that fork in the road. Still, the theme in America in 2014 is the freedom to quit. Young adults are told quitting the job market and chilling in their parents' basement is a good thing. Up to 2.5 million Americans will be seduced to quit work, or to work part-time because of the healthcare law, and joining the millions that have already bailed out on the jobs market.

All of these developments along with the spike in food stamps, and other welfare programs are being touted as great signs of a caring nation. But it's really a reflection of an entitled nation, flaying away in the murky quicksand of lower expectations of ourselves and our country. There was a time when stronger economies provided the backdrop for stronger marriages. In 1958, women got divorced at the rate of 8.5 per 1,000 married couples, only to see that number surge during the hippie-era of free love in the 1960s.

Then California changed its law to "no fault" divorce in 1970, which opened the door for quick and easy divorces. Consequently, the ratio for women spiked from 15.0% to 23.0% by 1979. The election and old-fashioned values, brought back to the national stage during the Reagan years, saw the number decline; but things have changed, values have changed, and it's optimum happiness with less effort or heartache. So, we celebrate a surge in divorces, as great anecdotal evidence that America is a great place to live.

The other "quits" we should be embracing are of those people telling their bosses to "take this job and shove it!" That number continues to edge higher as job openings have rebounded back to pre-recession levels.

All of these things are good but anecdotal, and probably won't carry much weight when the FOMC minutes are released. There is much anticipation, but it's unlikely this new Fed has enough clean data to make any major decisions. I still can't believe that some thought Yellen was dovish in her testimony - it's her rep, but she doesn't want to upset the applecart. The new Federal Reserve chairwoman will join unhappy couples and unhappy workers, and "quit" so the market can embrace reality and remove a lingering stigma that's kept millions out of the rally in bitter coldness.

Housing construction data for January came as a disappointment: annually adjusted starts were 880,000 or down 16% month to month and well below the 950,000 consensus. That being said, there is certainly an element of weather in the data. In particular, the Midwest which showed a 68% drop month to month which is so outrageous it appears to be an outlier that was frozen by the weather. Oddly though the northeast was up 62% due to volatility in multi-family units; but still single-family starts in the northeast were up 2%.
Given the volatility in starts and the affects of weather, it's probably better to look at permits for new construction this month, which will have been much less affected by the cold. Permits were much tamer, down 5% month to month but of course still a decline. Permits for single-family units were down even less, by 1.3%.

Nevertheless, single-family permits are still down 6.1% over the past two months, indicating that even though the cold must have played a part in the data during the month there also seems to be some underlying weakness. The good news though is that supply for existing homes (as measured by the NAR) has also continued to fall back towards the lows meaning there remains room for new construction. Conditions in the housing market will become clearer moving into the spring, as the weather heats up and the home selling season gets into gear.