Wars and Rumors of Wars

Cal Thomas
|
Posted: Aug 03, 2017 12:00 AM
Share   Tweet
The opinions expressed by columnists are their own and do not necessarily represent the views of Townhall.com. 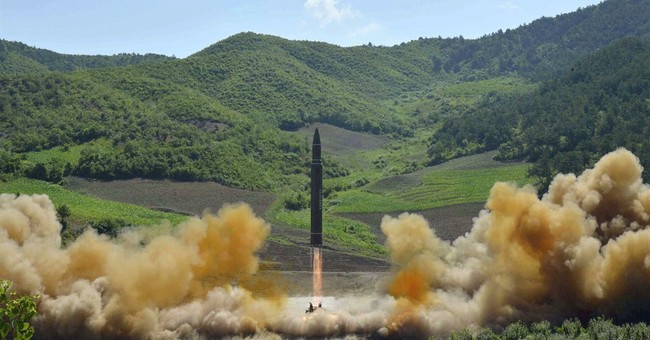 One month after the election, President-elect Donald Trump made a "victory tour" of states that had helped deliver his surprise win.

In Fayetteville, North Carolina, Trump introduced his choice for Secretary of Defense, Gen. James Mattis, and pledged the following: "We will stop racing to topple foreign regimes that we know nothing about, that we shouldn't be involved with. Instead, our focus must be on defeating terrorism and destroying ISIS, and we will."

He appears to be fulfilling the second part of that pledge, less so the first. Think North Korea, Iran, Russia, and now even Venezuela, which has had new sanctions placed on it following fraudulent elections giving dictatorial power to President Nicolas Maduro.

While Venezuela is no threat to America and Russia is a major headache, North Korea and Iran are clear and present dangers. These two rogue regimes are committed to developing nuclear weapons capable of reaching U.S. cities no matter what we do.

Clearly this cannot be allowed to happen, but the question is how to stop them short of all-out war that has the potential to kill millions and create a doomsday scenario reminiscent of Cold War movies like "Fail Safe," "Dr. Strangelove" and "On the Beach."

The best offense really is a good defense. When Ronald Reagan proposed his "Strategic Defense Initiative" (SDI) in a nationally televised address on March 23, 1983, many on the left mocked him. They called his proposal science fiction and unworkable, derisively labeling it "Star Wars."

They're not mocking that proposal now. The Defense Department has had several successes with its Terminal High Altitude Defense (THAAD) anti-missile system, but only at targets that represent medium-range missiles. In May, the U.S. Missile Defense Agency also "'successfully intercepted' an intercontinental ballistic missile during the first test of its ground-based intercept system." That's not science fiction.

Readers should revisit Reagan's speech as a template for dealing with modern threats. In that address from the Oval Office, Reagan said the risk of war is lessened when the U.S. has a strong deterrence, which he defined as "making sure any adversary who thinks about attacking the United States, or our allies, or our vital interests, concludes that the risks to him outweigh any potential gains. Once he understands that, he won't attack. We maintain the peace through our strength; weakness only invites aggression."

Reagan said the strategy of deterrence had not changed, but what it takes to deter had changed. While acknowledging it might take decades to achieve his Strategic Defense Initiative (SDI), Reagan said he wanted to take the first step. He concluded his address: "I am directing a comprehensive and intensive effort to define a long-term research and development program to begin to achieve our ultimate goal of eliminating the threat posed by strategic nuclear missiles. This could pave the way for arms control measures to eliminate the weapons themselves. We seek neither military superiority nor political advantage. Our only purpose -- one all people share -- is to search for ways to reduce the danger of nuclear war.

My fellow Americans, tonight we're launching an effort which holds the promise of changing the course of human history. There will be risks, and results take time. But I believe we can do it. As we cross this threshold, I ask for your prayers and your support."

President Trump should emulate his predecessor, making his first televised address from the Oval Office during which he explains to Americans why North Korea and Iran pose an immediate, or ultimate, threat to the United States. He should announce a fast-track effort to escalate THAAD so it can destroy ICBMs. A space-based, anti-missile system should then complement our defenses in order to protect America and our allies from nuclear attack.

As Reagan noted, weakness encourages tyrants. Tehran and Pyongyang must be encouraged at what appears to be instability in the Trump administration. A credible missile defense system would send them a message more powerful than words.