Cal Thomas
|
Posted: Dec 06, 2016 12:00 AM
Share   Tweet
The opinions expressed by columnists are their own and do not necessarily represent the views of Townhall.com. 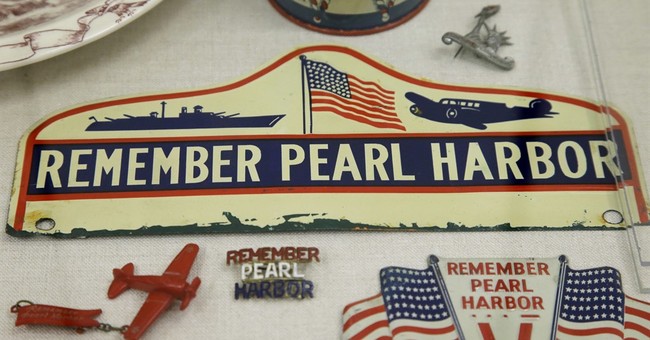 Only five of the 335 men who survived the unprovoked attack that sunk the USS Arizona on Dec. 7, 1941 remain alive. Donald Stratton, 94, is one of them. He has added to the historical knowledge of that day and the beginning of America's entry into World War II in a new book, "All the Gallant Men: The First Memoir By a USS Arizona Survivor."

Typical of so many men of that era, the book (written with Ken Gire) is less about Stratton, a 19-year-old kid from a tiny Nebraska town ravaged by the Great Depression, and more about the men with whom he served.

According to the book, total casualties at Pearl Harbor on that fateful day amounted to 2,403 dead and 1,176 wounded. Many of Stratton's shipmates lie interred in the bowels of the Arizona, which still secretes oil, a constant reminder to "never forget."

People too young to have known men of that era, or who never asked grandparents about their World War II experience, will find in Stratton's book a quality that has declined in modern times -- modesty. "We were not extraordinary men," he writes. "Truth be told, most of us had enlisted because there were precious few jobs to be found where we lived."

The isolationist spirit was strong in 1941. Here's Stratton on the patriotism that overwhelmed isolationism after the attack: "Love for country welled up inside seemingly every American, coming out in the songs we sang, in the movies produced, in the newspaper articles that were written. ... We were ordinary men. What was extraordinary was the country we loved."

Compare this sentiment to what we see in today's movies, newspaper articles and songs. Stratton writes, "We loved who (America) was, what she stood for. We loved her for what she meant to us, and for what she had given us, even in those meager times."

People of that generation were taught to be grateful for the little they had and not to be envious of others, who might have more. That's another contrast with the envy-greed-entitlement spirit of our age.

There have been numerous accounts of that awful day, but few as personal as Stratton's. What comes through as one reads about the unbelievable cruelty of "smiling and waving" Japanese pilots, as they rained death on a nation that was officially at peace, was the heroism of young men who witnessed explosions, flying body parts, burning oil, shattered metal and peeling flesh.

Where did that heroism come from? These were still mostly adolescents whose previous battles were over acne and getting a date for a Saturday night dance. It is a question raised by historians and commentators over the years. The answer is that their strength was instilled in them by parents and the circumstances of their lives. Doing without material things can force one to focus on what matters, such as developing character and other virtues that seem in short supply in today's celebrity culture.

"All the Gallant Men" is deeply personal. Stratton still remembers the names of many of his shipmates who died, as well as those who survived. He brings them back to life as ghosts from the past, their futures snuffed out by war.

Today we are a divided nation. Nothing unites us. We prefer tearing down to building up, and suffer for it.

Stratton's book reminds us of a better America, an America that was strong in character, not just military power. As president-elect Donald Trump attempts to "make America great again," he might recall that true greatness is not found in external prosperity or military might alone. Rather, as Donald Stratton reminds us, it comes from within.