Trump Calls for an Oath to America

Cal Thomas
|
Posted: Sep 01, 2016 12:01 AM
Share   Tweet
The opinions expressed by columnists are their own and do not necessarily represent the views of Townhall.com. 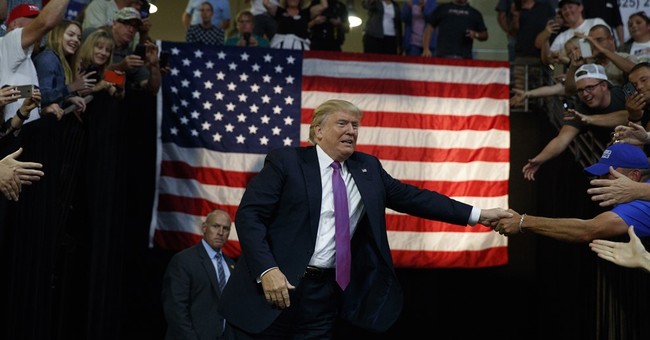 Loyalty oaths have been tried in the past, but eventually were struck down by the courts as either too vague, or an unconstitutional violation of free speech. These applied, as far as I can tell from reading their history, only to American citizens.

Republican presidential candidate Donald Trump has suggested something different. He wants to screen people coming into America to see if they share American values. Trump says he would exclude not only people who sympathize with terrorists and believe in Sharia law, but those "who do not believe in our Constitution, or who support bigotry and hatred."

Think of it this way, would the NAACP admit a member of the KKK? Who would deny them their right to turn racists away?

From the reaction of the media and Democrats (but I repeat myself), one might think Trump's name is a synonym for "bigot" and that he is attempting to create a master race in America. Not so fast.

As World Magazine editor Marvin Olasky points out in the publication's Sept. 3 issue, "Millions of Americans are here because their ancestors signed 'declarations of intention' similar to what Trump is suggesting."

Olasky found the declaration of intention Albert Einstein signed in 1936. He became a U.S. citizen four years later. Here is what it said: "I will, before being admitted to citizenship, renounce forever all allegiance and fidelity to any foreign prince, potentate, state, or sovereignty. ... I am not an anarchist; I am not a polygamist nor a believer in the practice of polygamy." Olasky writes that his immigrant grandfather signed a similar declaration in 1914.

A century ago, he says, "anarchist" was the equivalent of today's terrorist. Some anarchists planted bombs, one assassinated President William McKinley.

Olasky continues: "Since Sharia law allows and even proposes polygamy as an act of justice, U.S. law excluded Muslims who embraced it. There were to be no divided loyalties." In order for Utah to enter the Union, the state had to renounce polygamy, a doctrine believed and practiced at that time by some Mormons. President Obama is admitting people into America who believe in Sharia law, and the polygamy it allows.

"No divided loyalties" was the key phrase in Olasky's last sentence. How long ago and far away that seems today when our loyalties are more divided than at any time since the Civil War. Diversity has replaced unity and hyphenated identifiers now divide races and ethnic groups. "Out of many, one" is fading as our national motto. Out of one, many, is rapidly becoming our new one.

Much of mainstream media fuel the division because conflict sells. They promote our flaws instead of the phrase from "America the Beautiful," one of our great patriotic hymns, "God mend thine every flaw." Instead, too many seem intent on exposing, even promoting, new flaws and dividing us further.

Who will love America if we don't? Who will sacrifice their lives for freedom if not us? We had better realize America is something special, or risk losing it.

Another verse from "America the Beautiful" is worth recalling as the presidential election approaches:

Who more than self their country loved

And mercy more than life."

Who among our leaders demonstrate their love of America more than their love of self? Go to YouTube.com and listen to the late Ray Charles' version of this hymn to America. If it doesn't make you tear up, perhaps you'd better check your patriotic meter.

There is nothing wrong and much right about what Trump proposes for people who want to become citizens of this country. He is no more a bigot than those who wrote the oath taken by Albert Einstein and many others.