What Americans Think About NFL Protests -- and Trump

Byron York
|
Posted: Oct 04, 2017 12:01 AM
Share   Tweet
The opinions expressed by columnists are their own and do not necessarily represent the views of Townhall.com. 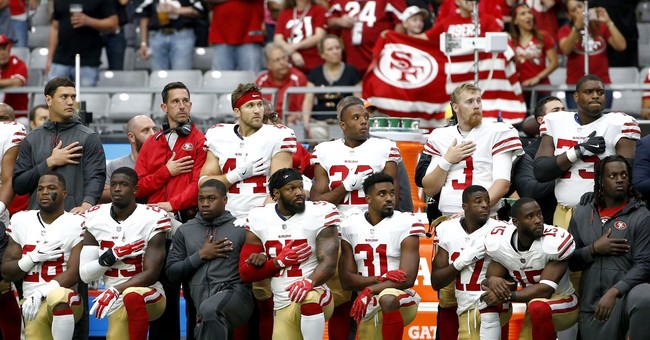 Whenever President Trump sets off a new controversy, there's always a period of hair-on-fire commentary, usually conducted in the absence of polls or other evidence of public opinion. It's happened again and again, the latest example being the president, the NFL and the national anthem.

Trump set things off Sept. 22 during a speech in Alabama. Now, after some time has passed, there are new polls with information on the underlying issue -- NFL players protesting during the national anthem -- and Trump's treatment of it.

On the protests, the short version is, the public, which disapproved when Colin Kaepernick first refused to stand for the anthem last year, still disapproves.

The disapprove-approve numbers were 51-39 in a new ESPN poll.

A USA Today/Suffolk poll got a different result -- 51 percent said the protests are appropriate, while 42 percent said they aren't -- but did so by writing a question that specifically framed the protest as a stand against racial injustice. The question: "Some NFL players have dropped to one knee during the playing of the national anthem, as a protest bringing attention to police brutality and racial injustice. In your opinion, is it appropriate for players to engage in this sort of protest before an NFL game -- yes or no?"

In a more general sense, the CBS poll shed additional light on the public's attitude toward the demonstrations when it asked, "Do you think professional athletes should or should not use their position and fame to talk politics or raise issues, if they want to?" The poll gave respondents three choices: "Yes, whenever they want to," "Yes, but only on their own time," and "No, they should not."

The bottom line is that in most polls, other than the USA Today/Suffolk survey, small majorities oppose the national anthem protests. But in a broader sense, a much larger majority opposes athletes using the field of competition to play politics.

Why is the majority generally opposing political activity on the field larger than the majority specifically opposing the anthem protests? Just a theory here -- it could be that the former is a true measure of opinion on sports protests, while the latter is associated with Trump, which means measures of opinion about the anthem protests are commingled with respondents' opinions about the president.

CNN asked, "Do you think Donald Trump did the right thing or the wrong thing by criticizing athletes from the National Football League who have protested by kneeling during the national anthem?" Sixty percent said Trump did the wrong thing, while 34 percent said he did the right thing and six percent didn't know. Other polls showed similarly strong disapproval of the president's action.

What does it all mean? First, most Americans disapprove of the protests. But at the same time, most don't want the president inserting himself into the issue. Even those Americans who support the president would still like to see him concentrate his public statements on issues like taxes, economic growth, healthcare, immigration, North Korea, and other critical matters.

But Trump does what he does. And on the NFL protest question, if the new polls are correct, he's on the same side as most Americans -- even if most also wish he would stay out of it.