Should Republicans Appear On Colbert? 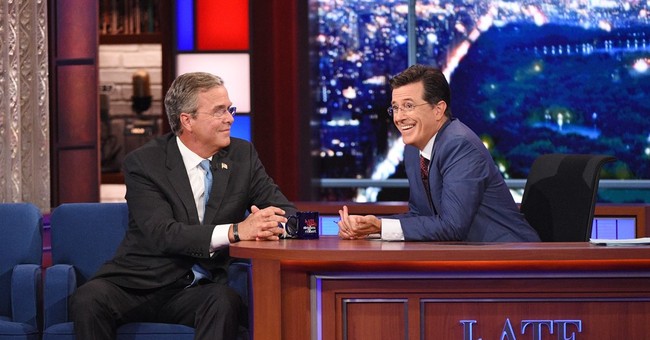 Stephen Colbert spent nine years mocking conservatives on a comedy program premised on mocking conservatives. It was a good fit; Colbert's political views lean left, and even after leaving his right-wing loudmouth character behind, he's been happy to dive into the most contentious political issues of the day. (Just watch the video he made in June celebrating the Supreme Court gay marriage decision and deriding its dissenters.)

Recently the new play-it-straight Colbert had Republican presidential candidate Ted Cruz as a guest. Not long before, on his Sept. 8 premiere, Colbert had Jeb Bush. The appearances raised questions for Republicans considering future visits. Is Colbert really playing it straight? And is it worth appearing on his program?

Bush had a fairly easy time of it, and aides and candidate alike came away happy with the experience.

"The first Colbert show was a huge platform to reach a broad audience," Bush spokesman Tim Miller said. "Republicans in the past too often have avoided opportunities to do so. Jeb enjoyed it -- he thought the Colbert 'Jeb!' shtick was hilarious."

Yes, the "Jeb!" exchange was funny -- when Colbert asked Bush about the "!" in the logo and Bush explained that it "connotes excitement." The funny part, of course, was that it so obviously does not connote excitement in the current Bush campaign, so it's unclear if the exchange, taken as a whole, was good or bad for the candidate.

With Cruz, a good deal of the interview consisted of Colbert throwing out a tired set of Democratic talking points about Ronald Reagan and immigration. Colbert also seemed eager to pin Cruz down on gay marriage. When Cruz said, "What I'm fighting for are simple principles: live within our means, stop bankrupting our kids and grandkids, follow the Constitution," Colbert quickly added: "And no gay marriage. And no gay marriage."

When Cruz explained his belief that the Constitution leaves marriage to the states, the audience booed. Colbert shushed them. "Guys, however you feel, he's my guest, so please don't boo him," he said.

"It's a matter of compromising," Colbert said to Cruz. "Will you be willing to compromise with the other side?"

Cruz handled it all pretty well, even winning some tepid applause at the end. His advisers thought the experience was positive; Cruz got to show a little humor, engage the issues in an informal context and appear before an audience that probably hadn't seen him before.

Maybe Cruz's team is right. Or maybe an interview crafted around an attempt to coax the Republican into explaining why he isn't one of those bad Republicans isn't entirely productive.

Of course, Democrats have appeared on Colbert, too. Bernie Sanders was on this week, before a very friendly audience that broke into chants of "Bernie! Bernie! Bernie!" And Colbert also challenged Sanders, but in a way that seemed to make fun of the challenge, as opposed to making fun of Sanders.

For example, bringing up the fact that Sanders is a socialist, Colbert proposed to "play capitalism's advocate" for a moment. The United States is rich because of its capitalist system, he said. "If we became a socialist nation, we would be just like some Scandinavian country. We'd be eating pickled herring and we would have a high suicide rate. Why do you want that for the United States?"

The questions had a decidedly different feel than those directed at Cruz. And Colbert did not ask Sanders, who is at least as far to the left as Cruz is to the right, whether he could compromise with the other side.

So what should Republicans do? On the one hand there is the argument that they should not be afraid to step into a forum in which they will be challenged and even ridiculed. And there are always those much sought-after voters who will see the candidate for the first time.

On the other hand, Colbert is a talented professional comedian with a political bent. If he wants to make a candidate's positions look vaguely ridiculous -- all while seeming entirely civil -- he can. Do Republicans need to show that they are good sports by going along? And do such appearances really change any minds, anyway?

Whatever the case, GOP candidates are ready to go along. "The governor has been on Stephen's show many times, and they have a great rapport," said Mike Huckabee spokeswoman Alice Stewart, who added that an appearance is under discussion. "We welcome the opportunity to appear on his show because it allows Gov. Huckabee to discuss the issues, show his personality, and connect with an audience we may not reach through traditional news outlets."

Back in 2006, The New York Times looked at places which had the most Google searches for the name of Colbert's old show, "The Colbert Report." The result "reads like a ranking of the most liberal places in the country," the paper reported -- Portland, Madison, San Francisco, and other deep blue locales.

Of course, Colbert is on a different network now, without the right-wing cartoon character. But he's still Colbert, and Republicans have questions to ask themselves before appearing on his program.