Bruce Bialosky
|
Posted: Mar 13, 2016 12:01 AM
Share   Tweet
The opinions expressed by columnists are their own and do not necessarily represent the views of Townhall.com. 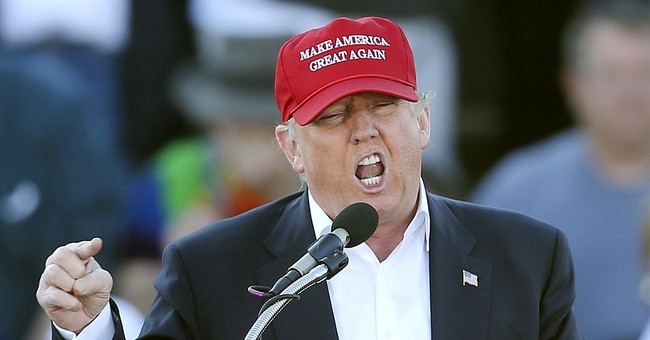 For a long time, I tolerated Trump. When people criticized him and called him a conservative, I straightened them out and told him he is no conservative, but now I believe he is also no Republican. I don’t know what this man stands for other than himself and “Make America Great Again” which is a slogan he attempted to copyright four years ago. The current mantra is there is a civil war in the Republican Party which I don’t get since I don’t know any element of the Republican Party that supports this man.

Here are some of the issues that define Trump as not being a conservative or a Republican:

1. Kelo – I have never met a Republican who was not apoplectic about the Kelo vs. New London decision. This decision redefined eminent domain to allow the little twerps with none of their own money at risk, who got college degrees in city planning, to design cities and force people to give up their property for commercial purposes. No one disagrees with the fact we need eminent domain to build roads and bridges, but shopping centers? Especially ones that raise more revenues to feed city coffers and inflate overpaid government employees’ compensation. This is crony capitalism at its very worst and Trump embraces it.

2. Lawyers – Trump loves lawyers and suing people. I realize that anyone involved in as many businesses as he has been in over the years will be confronted with frivolous lawsuits, but this man brags about how tough he is about lawsuits. He embraces lawyers. He embraces the legal system. He has used it to his own benefit many times. There is not one Republican or Conservative who does not want to break the back of the Lawyers’ Lobby (Big Law). They feed the Democrats. Go to his website and see his seven-point plan on healthcare – There is no tort reform. Getting lawyers out of our healthcare system is central to controlling costs and stopping doctors from performing frivolous procedures to protect themselves from lawsuits, but there is no mention of tort reform in Trump’s plan.

3. Redefining our Libel Laws – Nothing is more sacrosanct to Republicans and Conservatives than the First Amendment and the protection of free speech. Trump states he wants to redefine the libel laws. This is something he would have no control over if elected, but it displays a mindset. The same mindset that is happening at our colleges where children are asking for notifications of anything in their reading that might offend them – triggers. Triggers define the Left. Restrictions of free speech on college campuses (unless you agree with their twisted perception of America) define the Left. The mindset he has displayed here is everything the Right hates and Trump embraces it. You cannot, cannot, cannot be a Republican and not hate the press, but be willing to die to protect their freedom. Trump does not fit that description.

Why do I believe that some people support Trump? First and foremost, because of his persona. They like his schtick. Second, because they are irate at the supposed Republican establishment. They say three things:

1. We were promised by the Republicans if they were given the House and the Senate things would change – they have. Has Obama passed anything in the past six years? Zero, Zilch, Nothing. The budget deficit was brought down by almost a Trillion dollars. Many of his judicial appointments are being held in limbo. He will never get that Supreme Court appointee. What in God’s name did you expect? We have a lawless president who makes up rules as he goes along and then says sue me. And that is what the Republicans keep doing is suing and winning.

2. McCain, Romney, Bush and Dole are not true Conservatives and that is why we keep losing the presidency. And your answer is to nominate someone who is far to the left of any of those men? When Democrats complain to me about Trump I tell them they should be happy. He will never do anything about abortion. He is the most liberal person I can remember running as a Republican in my lifetime.

3. He is self-funding his campaign – Malarkey. How much has he spent of his own money after the lapdog media keeps giving him free publicity every time he says something to antagonize the population? He has collected $7.5 million from his website. He has only loaned money to his campaign planning on getting it back from donations. What if he becomes the nominee? That will cost $500 million or more to beat the Congenital Liar. He will never fund that nor is he liquid enough to do so. As I said: self-funding - Malarkey.

Let’s get this straight. Donald Trump is neither a Republican nor a Conservative. He is running in the Republican primaries because he saw an opening he would never get in the Democratic Party. He is no different from Michael Bloomberg who ran for mayor as a Republican in New York City, and soon became an independent and a then a Democrat again.

Donald Trump may be bringing voters to the Republican primaries, but he is only getting 35% of the vote. 65% are coming to vote against him. He does not have a majority of the delegates. He does not deserve to be the nominee of the Republican Party nor has he earned it. He will not have 1,237 delegates in Cleveland and will never get that many.

Bernie Sanders is a Socialist and Hillary Clinton is a Congenital Liar and should be indicted. The Republicans need to nominate a Republican, and Donald Trump is not one.