A Day at The Gun Range

Bruce Bialosky
|
Posted: Jan 24, 2016 12:01 AM
Share   Tweet
The opinions expressed by columnists are their own and do not necessarily represent the views of Townhall.com. 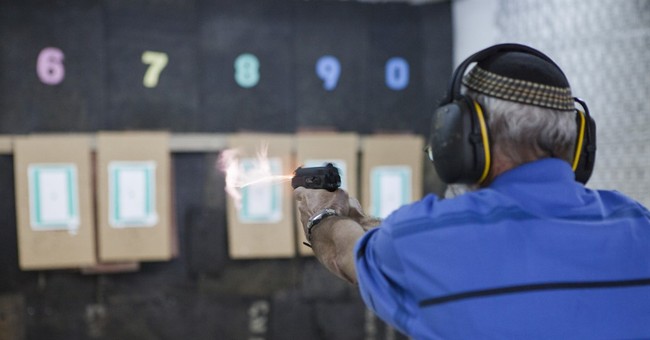 With all the guns owned by Americans and the surge of purchases every time President Obama opens his mouth on the subject, there is still a huge population of adult Americans who have no knowledge of guns and how they work. I would fall into that category even though I once owned a rifle, but that was a lifetime ago; any knowledge I then had has totally dissipated. My son was interested in the experience so we engaged my brother who target shoots as a hobby and he willingly provided us a primer on the gun range experience.

We met my brother on a Sunday morning at a gun range in Burbank, California. My brother had driven up from Orange County, CA where he shoots at his local range. Before we arrived he had sent us a couple of videos on basic safety and etiquette at a gun range. It had handy tips like never point a gun at anyone and when you are in your shooting bay always leave your gun unloaded with the side up that shows it is not currently loaded. It is also provided basic instruction on how to handle a gun and hold it while shooting. This range was only a fifty-foot range; it is really meant for hand guns though we did see some people do a little practice with long guns (rifles).

We were told to bring our earplugs. But when we got to the range we had to rent ear muffs which went over the ear plugs. Believe me; you need both. You think you have an idea how loud a gun can be, but you really don’t know until you enter into a gun range. The noise created in all those police dramas does not give you an inkling of what is in store for you in the way of a decibel challenge. You also become aware of the fact of why they call it “firing” a gun. That is because even with today’s modern pistols a flash of fire still emits from the gun each time you pull the trigger.

Back to signing in. The safety standards are quite significant. Other than your ear protection, you need eye protection. The vast majority of handguns today are semi-automatic which means they come typically with a 10-bullet magazine built into the gun handle. Every time you shoot, the shell flies out of the gun. Only revolvers retain the shells. Thus, you do not want one of these shells hitting your eyes. So if you don’t normally wear eyeglasses you either have to bring eye protection or rent it. After we read the detailed instruction of proper gun range behavior and signed off on it, we were finally ready for a little target practice.

My brother loaded the three magazines he had brought for each gun. He loaded them with two bullets, three bullets and five bullets. The purpose was to get us use to shooting the gun, but also get used to operating the gun. This way we would load the magazine, cock the gun, shoot and then eject the magazine and start over again. After we got used to the operation of the gun he reloaded the magazines with five bullets each and we started all over again. He instructed us how to stand and reminded us how to grasp the gun.

There is a proper way to stand (slightly bent knees), extend your arms, grasp the gun and pull the trigger. It is like any other physical activity – form is everything. My brother had so much practice he easily hit the center of the target when he shot. My son and I were trying to get the hang of it and there was no question he was doing better than I, having the necessary form to succeed.

If you have not fired a handgun you can only imagine the power that it emits. Depending on the particular gun and the ammunition you would get a kick back from the gun each time you fired. My brother also spoke of how much force it took to pull the trigger stating the guns we were using had triggers that took four pounds of pressure. He informed us some triggers took ten pounds of pressure to pull and that they are quite challenging.

While Number One Son was taking his turn, I spent time studying my surroundings. There were fourteen bays divided into two sections. When we arrived it was not very busy, but as we went along the range became very crowded. The population was a good mix of men and women with a ratio of 60-40 men to women. Most came dressed in jeans and dark shirts; as my brother told me, wear a dark shirt because of the residue coming from the gun. Some of the people stayed for a half-hour and others lingered longer like we did because they had two or three people in their bay.

The most interesting challenge was communicating. My brother was instructing us, but we had sound proof muffs on plus ear plugs. Sometimes to clearly understand my brother I had to lift one earmuff and then endure the crashing sound of others shooting.

The biggest lesson I learned: It is not easy to shoot a gun accurately. If you own a gun the only way to properly use it is to practice regularly and maintain your gun. The fable passed by the anti-gun people is that the “gun establishment” is not all about gun safety. Organizations like the NRA are all about gun safety, urging people on about proper maintenance, handling, securing and practicing with their gun. At the gun range you really wonder how the bad guys ever hit their intended target unless they are regularly out target shooting. That image does not conjure up a picture in my mind. It is not easy to aim and fire a gun without regular practice and proper form. It is always fascinating seeing a bad guy in a movie using one hand, firing and hitting his target – maybe even on the run. I doubt that often happens even at close range especially since I doubt they are regularly out at a range perfecting technique.

I often wonder how much the people who question gun ownership actually know about guns. They lurch into their mantra of “common sense” gun control with very little knowledge on the subject. They might wish to spend a couple hours at a gun range to have a first- hand experience.