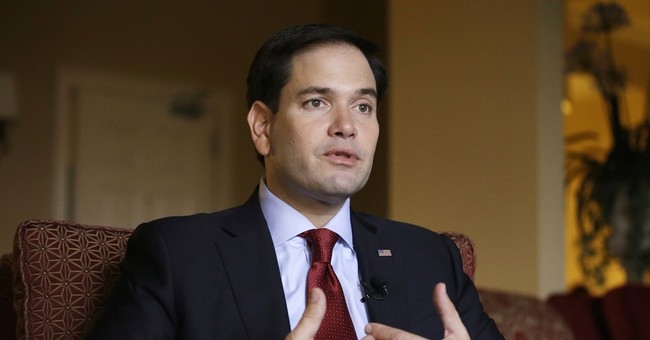 After seven years of the Obama administration, Americans are fed up with their politicians. Americans think their elected leaders have created winners and losers and that the average American is the loser. They think everyone is taking advantage of the system except for them. The electorate is revolting. One presidential candidate they should not be peeved at is Marco Rubio.

This has come to the forefront because Sen. Rubio is not a wealthy man. One candidate, Donald Trump, has disparaged him for his lack of financial success. That is particularly fascinating coming from someone who grew up amid great wealth and stated he was burdened with repaying his father the million-dollar loan Trump used for his first real estate development.

Americans should be celebrating Rubio’s situation and let me tell you why.

We are often bewildered how some who hold elected office for 40 years become significantly wealthy. These elected leaders make a very good living, but not a great one. The ones who go to Washington always complain about the cost of maintaining two homes – D.C. and in their home state. Most of us would think they should own a nice, but modest home in their state and have their very generous pension Congress put in place for them and not much else. Unfortunately, that is not true for too many.

Sen. Harry Reid (D-NV) was first elected to the state assembly in 1968. After one term there he served a term as Nevada’s lt. governor. Following a short break he served four years as chairman of Nevada’s Gaming Commission. Then he was elected to the U.S. House for two

terms and since 1987 has been a U.S. senator. Magically during this time of being in public life for nearly 50 years he has become a very wealthy man. His net worth is reported at between $3 million and $6.3 million. The low estimates can always be discounted for public officials. In fact, previously Reid was reported to be worth $10 million, not including pension benefits. Suspicious people might think he has been taking advantage of his position for personal benefit and Reid has had many questionable financial deals.

He is not the only one. Orrin Hatch (R-UT) is another fine example. He graduated from law school in 1962. He was elected to the U.S. Senate in 1976 and has served there for nearly 40 years or almost his entire professional lifespan. Yet he has been estimated to be the 40th wealthiest member of the Senate weighing in at a hefty net worth of $4.6 million.

Sen. Rubio’s net worth is estimated to be about $200,000. That sounds like an ordinary American facing normal financial challenges, and that is exactly what his history shows. He went to law school for which he incurred substantial debt. As most Americans know by now, his parents were immigrants who worked jobs which made them people of modest means. After law school Rubio became a member of the City Commission of Miami in 1998. In 2000, he was elected to the Florida House where he stayed for eight years. In 2010 he was elected to the U.S. Senate.

For the past 17 years Rubio has basically been in elected office. His only financial benefit other than his pay from his position were royalties from a book he wrote about his life story. He had student loans to pay off, four children to support who are all going to private religious school, and he must maintain two places to live like most members of Congress. And believe me the schools his children attend are not comparable to the exceedingly-expensive school (Sidwell Friends) that our president has been sending the current first children to in Washington, D.C.

Instead of celebrating the fact that we have an elected official not greasing his own well-being, some have attacked Rubio. They question his financial decisions which are the same as every American family faces today. They question why he used a Florida Republican Party credit card to charge personal items. Unlike most politicians who only pay back these charges when caught red-handed and then blame it on an errant staffer, Rubio paid his charges each month when the credit card bill arrived. There were never reimbursements for his charges; only concurrent payment of his personal charges.

There is another elected official I can think of who has a record like this. His name is Paul Ryan, now speaker of the House. Ryan sleeps on a cot in his D.C. office and flies home every weekend to be with his family. No one has ever accused Paul (that is what he likes to be called) of double dealing. No one ever has pointed out how he invested $1,000 in cattle futures and miraculously made a $100,000 profit.

Americans who are sick of politicians and their cronies making it rich while the middle class of America melts away should be looking at Rubio differently. He went to Washington to do the people’s business -- not his own. No matter which candidate you are supporting for president, Rubio should be celebrated as someone who understands the financial challenges of 95 percent of us. He should be celebrated for not being another pig at the public trough.