Respecting Yourself Before the Environment 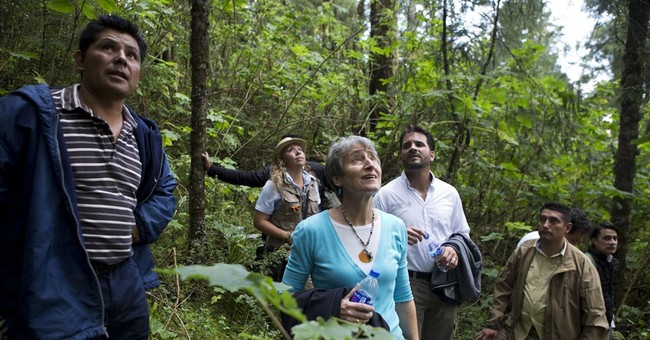 There is a heated debate (no pun intended) regarding our environment and global warming. While that may be an important issue, in my opinion what is more important is how people act in public and their regard for others in a public setting.

This became evident again when I attended Jewish High Holiday services. After some major changes at my synagogue where I have been a member for 29 years, we were betwixt and between. We finally decided to attend services led by Dennis Prager and organized by his wife Susan. Mr. Prager is as knowledgeable about Jewish scripture as any rabbi. After attending Rosh Hashanah (New Year) services with the Pragers (and approximately 350 others), our grown children revolted. They had grown up at our temple and they felt comfortable there. My wife and I decided for family harmony we would attend Yom Kippur services back at the Temple.

The culture difference was blatant upon our return. I volunteer at our synagogue during the holidays, helping to make sure the services get off on time and run efficiently. Since there are both “early” and “late” services during the evening and the following day, it is essential we provide not only a spiritual service, but a timely one. It is just considerate for the second group to not keep them waiting.

The difference between Mr. Prager’s service and those at one of the respected temples in America is stark. It was again surprising how many grownups and children came under-dressed for the occasion at the latter. But more it was the rampant use of cell phones during the service at the synagogue. The Temple put up a large sign advising people to give their cell phone a holiday also, but it was blatantly disregarded. Yom Kippur is the holiest, most sacred day of the year for Jews, and yet the amount of people who could not turn off their cells and leave them off for just two hours again baffled me. We saw none of that at Prager’s services. A man actually argued with me when I asked him to turn off his cell while sitting in the sanctuary as they were reading from the Torah. One must wonder “why are you here”? What are you getting out of this experience?

In between the early and late morning services, the maintenance crew and some other volunteers help to get the sanctuary ready for the second service. In the meantime, some Temple members form a line outside so that once the doors are open, they can attempt to get their favorite seats. But the wait outside can be and was indeed fairly hot. I intervened when some of those waiting outside started a “heated” conversation with the ticket takers so as to gain entry and get relief from the sun. I explained to them we were moving as fast as we could to prepare the sanctuary. Then I said “You should see the way this place looks. It is worse than a movie theater after a full crowd.”

One has to wonder about the values of people who leave their own sanctuary a mess. They know where they got their prayer books, yarmulkes (skull caps) and prayer shawls from, but instead of returning them they leave them for the maid service (aka; the maintenance crew) to clean up. These are the same people who fret over global warming, but leave their own surroundings a pigsty. No such thing happened at Mr. Prager’s services.

It reminded me of the Glenn Beck rally on the Capitol Mall. I am no fan of Glenn Beck, but after his group left the rally the place was pristine. The typical crowd leaves it a disaster.

A similar occurrence happened that same week. Let me preface this by saying I have had the distinct honor of seeing opera all over the world. That is because I am a devoted husband. I am much more interested in seeing the Foo Fighters or The Who, but my wife dragged me once again to an operatic event.

This one was an opera fan’s dream. It was a charity event at the Dorothy Chandler Pavilion honoring the late Luciano Pavarotti. His pal Placido Domingo was there as the head of the Los Angeles Opera. The two star attractions were Renee Fleming and Andrea Bocelli who were performing together for the first time. Domingo even joined them for an aria.

Opera attendees are supposed to be more well-behaved than most. Not in La-La Land. The lady in the row in front of us one seat over starts waving her arms in the middle of the performance as though she were the conductor. The Australian lady next to us had to rap her along the head and ask her to stop. But that was not the worst.

I am used to people at rock concerts waving their cell phones. It is quite annoying. I am always amazed they cannot just shut them down and enjoy what they paid a lot of money to see. But there was a first for me. A guy in the row in front of me took out a tablet and started taking pictures … during the performance. He was totally oblivious to having been asked to shut down all electrical devices, being told it was prohibited to take pictures, and how distracting it was to all the people around him to have the light from the tablet flashing. Then he took out his cell and started snapping photos.

At the end of the song, I got up and calmly whispered into his ear that if he turned on one of his electrical devices again I would break it. He told me not to threaten him. I told him I don’t make threats. I tell people what I am going to do and them I do it. When intermission came he and his girlfriend walked by spewing venom. Once again, the perpetrator becomes the victim in their own mind. In the meantime, all the people in our area thanked me for stopping him. One told me I was brave. I am confident these two evildoers drove to the event in a Prius.

This is not a new theme for me. People think they have the right to do whatever they want, regardless of whether it is impinging on anyone else. If you call them on their bad behavior, they attack you for stomping on their imaginary rights. When people in temple and at the opera cannot behave well, where can you expect people to do such?

Too many people are focused on macro behavior. Things like saving the planet. We need to focus a good bit more on micro behavior. That will make our planet a whole lot better. Just some thoughts during our holiday season.