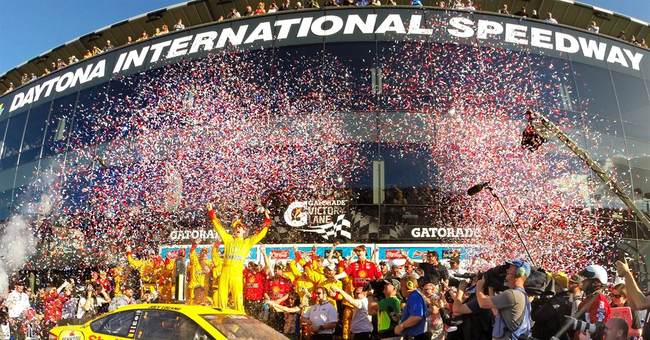 I have had the good fortune of attending the greatest sporting events in America with the exception of two. The one I had my eyes set on is billed as the Great American Race (with a tip of the hat to the Indy 500). So my wife and I set out to experience the golden jewel of the NASCAR Sprint Cup Season – the Daytona 500.

Coming from the Left Coast garnered many comments about our pending endeavor. Most of them were derisive. There were comments like “that will be interesting -- two Jews and 80,000 rednecks.” There were also observations such as ”why would you want to watch a bunch of cars go around and around and around a track.” We found these comments akin to the ignorance of a relative we visited who derided Bill O’Reilly. When my wife started to question his dislike for O’Reilly, I interrupted her and stated that the relative had never even watched Bill. The disdain was acknowledged simply because O’Reilly was on Fox News. Interesting (fun fact): Fox broadcasts NASCAR.

Having been at multiple major sporting events, I was well aware they are not one-day affairs. In Indianapolis they have a parade the day before not to mention the pre-race qualifier. In Louisville there is a parade and the day before the Kentucky Derby there is a full race card capped by the Kentucky Oaks, which is the premier horse race for fillies. In Daytona they have a full slate of races during the week leading up to the 500.

We attended the big race on Saturday –the Florida 300 Xfinity. It too is a stock car race, but the list of drivers isn’t the cream of the sport like on Sunday for the 500. Though the race had luminaries such as Dale Earnhardt, Jr., it was largely populated by second-tier drivers – many of whom were very young. Two were 18 and 19 years old which makes you wonder how they became qualified to race around a track at 180 MPH. At that age I was still driving my Toyota Corona at a zippy 70 MPH.

When we arrived at the race track we were reminded we were in the South – the parking lot attendants were actually polite. Everything was “Yes, Sir; No, Sir” instead of “Hey Guys.” In other words, they didn’t deign to refer to the elders as peers as has become commonplace.

A racetrack that is 2.5 miles around has an immense footprint. Another reason to go for the race the day before was to navigate our way around the track so that we would not be doing such the day of the big race. It took us a while to find the media center in the infield as helpful people sent us to and fro. We then toured the cold pits where the crews were preparing the cars for the race the next day.

We arrived at our grandstand seats in plenty of time for the start of the Florida 300. My wife got her first taste of big-time racing when the green flag came down and the engines were at full throttle. The first time the pack comes back around the track (which takes less than a minute at the speed they are running), you get the full exhilaration of why you are there. Car after car, inches behind the other in two rows flying by in a seemingly-choreographed dance. Drivers put their lives in the hands of their competitors with the hope that the next move would be as anticipated. They seemed to do this for 80 laps until the first real break in the action with a caution flag. The timing of how they moved and the strategy of the pit stops was fascinating to watch. This all ended with a couple of major crashes and the injury to one of the big stars of NASCAR, Kyle Busch, which knocked him out of the 500 the next day. The winner, Ryan Reed, is just 21 years old.

The Big Day began at the Media Center with football legend turned race team owner, Joe Gibbs, telling the press about Kyle Busch’s condition. That was followed by the reigning champion of the Sprint series, Kevin Harvick. He answered the many routine elements of the media’s questions, but then provided a glimpse into the unknown challenges of racing at this level. He stated “We started the week with completely different weather and we showed up on Sunday and it is 30 degrees warmer.” This is the challenge confronting not only by the drivers, but their crew in preparing the car to withstand different weather conditions.

They ran through various other dignitaries at the press conference including the Thunderbirds who were flying over the event in a few hours. They were followed by the Grand Marshall, Vince Vaughn. I was standing next to a couple of the Thunderbird pilots as they looked very impressed to be here with such a movie star. I made clear “You guys are the real stars here.” Kid Rock, who was performing a concert before the race, came by for the press run and I was able to ask him whether the other people in the entertainment industry treated him nicely since his political views vary from theirs. This came from personal experience of the “tolerant” left of Hollywood actually being intolerant. Kid said “The entertainers all are fine; it is the press. When they review my album and make a comment about me going hunting it is out of line.” He got a good laugh from the press in the room.

The electric moment came when Vince Vaughn as Grand Marshal yelled “Drivers, start your engines!” The pace car came out and then in a blink the green flag came down for the start of great race. Jeff Gordon, the retiring veteran racing in his last Daytona 500, had the lead for almost all of the first 100 laps. This was not a good omen as the last leader at the mid-way point who won the race was in 1995. The racers jockeyed for position, with the most interesting move made by Denny Hamlin who came from next to last in the 42nd starting position all the way to second place. The race was amazingly incident free and accident free despite the cheek-to-jowl driving. This is when one begins to understand deeply how skilled these drivers are at what they do. The grandstands were electrified when crowd favorite, Dale Earnhardt, Jr., the reigning champion of the 500, took the lead.

The race entered lap 180 of the 200 and it can only be described as riveting. As someone who has seen just about everything in sports, including the “most exciting two minutes in sports,” aka The Kentucky Derby, this was on a par with anything one could ever watch. There is just no comparison watching this event on TV. Absorbing the roar of the engines matched by the roar of more than 100,000 people as the drivers danced their pirouettes to maneuver as the cars now came by three wide on the marvelous track, one gets chills from the adrenaline rush.

A young star, Joey Logano, broke away from the pack. I leaned over to my wife and told her taking the lead in the final laps is not necessarily a smart thing with wind drafts and wolfs like Jimmie Johnson, Dale Earnhardt, Jr., Kevin Harvick and Denny Hamlin on your tail. As it turned out a minor accident brought out the caution flag. When the race restarted Logano’s gamble paid off as the youngster with a bright future fulfilled his promise and won the most important stock car race to cheers of his pit crew and the grandstands.

What a cherished American experience to share with my wife and an adoring crowd. And the answer to the question you have had since the beginning of this column is The Masters is the only one I have left on this continent. Then on to Wimbledon.