President Trump versus The Justice Department on Medical Marijuana

Brian Darling
|
Posted: Dec 15, 2017 10:58 AM
Share   Tweet
The opinions expressed by columnists are their own and do not necessarily represent the views of Townhall.com. 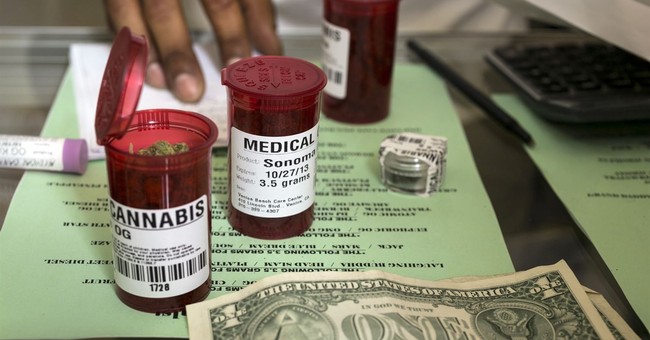 Congress is ending the year with battles over tax reform and how to fund the government into next year. Another battle being fought is over the future of medical marijuana in America.

The Justice Department is working overtime to remove a restriction in current law that prevents the federal government from prosecuting medical marijuana businesses in states where it has been made legal. The problem is that if the Department of Justice is successful, it would undermine a number of promises that President Donald J. Trump made on the campaign trail.

A coalition of federalist-minded conservatives and libertarians have voiced strong support for the restriction that has been in existence since 2014 when Reps. Dana Rohrabacher (R-CA) offered a bipartisan amendment to defund the power of the Justice Department to prosecute medical marijuana states. Since 2014, a funding rider has been included in every appropriations bill defunding any effort by the federal government to use Justice Department resources to effectively overturn state laws permitting medical marijuana use.

It seems that Trump’s own Justice Department has forgotten the repeated promises that candidate Donald J. Trump made on the campaign trail.  According to a Fox News transcript posted on February 11, 2016 from the O’Reilly Factor, Trump said about medical marijuana “I’m in favor of it a hundred percent.”

And that was not the only time.

There are numerous other examples of candidate Trump promising to protect states that have allowed medical marijuana. PolitiFacts brought up three examples.

On March 8, 2016, Trump said: "I think it certainly has to be a state — I have not smoked it — it’s got to be a state decision …  I do like it, you know, from a medical standpoint … it does do pretty good things. But from the other standpoint, I think that it should be up to the states."

And Oct. 29, 2015, Trump said: "The marijuana thing is such a big thing. I think medical should happen — right? Don’t we agree? I think so. And then I really believe we should leave it up to the states. It should be a state situation ... but I believe that the legalization of marijuana – other than for medical because I think medical, you know I know people that are very, very sick and for whatever reason the marijuana really helps them - … but in terms of marijuana and legalization, I think that should be a state issue, state-by-state."

Those promises continued after Trump was sworn in as president. The New York Times reported that in February of this year Trump’s spokesman said “the president understands the pain and suffering that many people go through who are facing especially terminal diseases and the comfort these drugs, including medical marijuana, can bring them.” How is it possible that Trump’s own Justice Department can engage in an aggressive effort to undermine these promises?

The Washington Post reported on June 13, 2017, that Attorney General Jeff Sessions has personally lobbied Congress to let him prosecute medical marijuana providers.The Post reported on a letter Sessions sent to Congress in May requesting that they block a vote on the “Rohrabacher-Farr Amendment” that specifically protects the “use, distribution, possession or cultivation” of medical marijuana.  The Republican leaders of the House listened and blocked consideration of the amendment during the appropriations process earlier this year.In the Senate, Sen. Patrick Leahy (D-VT) was successful in attaching the language to the Senate version of the appropriations bill. The end of year spending bill is expected to resolve the House and Senate language on this subject later this month.

The libertarian group Free the People has activated to educate voters that Trump’s own Justice Department is trying to undermine a campaign promise. There is a strong possibility that Sessions, not President Trump, wins on this issue if this issue is buried in a year-end spending bill with no opportunity for members to force a vote on the specific issue of the funding rider. Leaders in Congress will end up drafting up a year-end spending bill behind closed doors and many worry that this will not contain the Leahy-Rohrabacher language.

President Trump has been a promise keeper as president. He has worked hard to keep promise after promise from pushing a tax cut to nominating Neil Gorsuch to the Supreme Court. It is tough to understand how his own Attorney General has been allowed to undermine his numerous promises to allow states that have passed laws to allow medical marijuana.