Brent Bozell and Tim Graham
|
Posted: Nov 10, 2017 12:01 AM
Share   Tweet
The opinions expressed by columnists are their own and do not necessarily represent the views of Townhall.com. 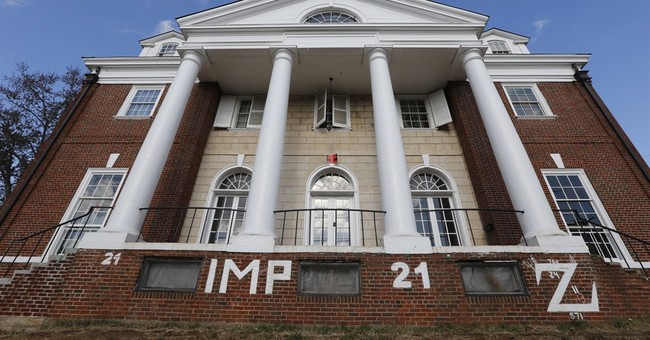 On Nov. 9, Rolling Stone magazine celebrated the 50th anniversary of its first issue, published in the hippie Haight-Ashbury neighborhood in San Francisco. True to form, liberal journalists -- who claim to care so deeply about the menace of fake reporting -- honored founder Jann Wenner and dismissed as insignificant the magazine's 2015 "A Rape on Campus" story scandal.

On Nov. 5, CBS "Sunday Morning" host Jane Pauley gushed over Wenner as "the rock star of publishing." Minutes later, she upgraded the flattery by calling him "perhaps the most influential rock star on the planet."

Out of nearly nine minutes, CBS correspondent Anthony Mason spent less than a minute on the fake story about gang rape at the University of Virginia. He asked, "How much did UVA hurt the magazine?" Wenner replied, "a little." Mason pushed back, and Wenner complained that it was "one incident" in 50 years, saying: "I think that the people who were in charge of this at the time, you know, let certain standards slide. Were it not for this one woman who fabricated, that was golden; that was a great story." Had both the interviewer and interviewee yawned at this point, it would have done justice to the mood.

"This one woman" was the center of the story, which became a national outrage about gang-raping fraternity boys. It turns out Rolling Stone didn't even get to square one and attempt to verify that there was a party at the Phi Kappa Psi frat house on the night in question. There wasn't. That's why it had to fork over $1.65 million in damages.

Put yourself in the shoes of those innocent young men who were accused of such a heinous crime, found guilty by such a powerful magazine and soundly condemned by a nation. The $1.65 million in damages does not begin to erase the humiliation.

NBC's "Today" show interviewed Wenner and didn't even bring up the subject. Host Matt Lauer was more interested in asking, "what are you most proud of in terms of a social issue that you got ahead of?" How about rape on campus? At least Lauer asked about the Rolling Stone cover that glamorized Boston Marathon bomber Dzhokhar Tsarnaev and then asked: "Was that your biggest do-over? Or are there some others?" Wenner volunteered the UVA story, saying, "we got, you know, really duped." So it just wasn't the magazine's fault. How's that for taking responsibility?

ABC's "Good Morning America" aired a story on Rolling Stone and a new Wenner biography on Oct. 20, which didn't include a word about the fake rape story as the host gushed over a 1972 nude cover photo of "Partridge Family" star David Cassidy.

Despite being exposed as an unreliable source of lies and character assassination, almost every liberal-media notice started with comparing Rolling Stone to the Holy Bible. This suggests that they're all eager lackeys of the hippie magazine's public relations staff. CBS began, saying, "It's been the cultural bible of baby boomers for half a century." NBC also called it "the cultural bible for baby boomers." The New York Times described it as the "shiny entertainment-industry bible." A few weeks ago, a Times headline read, "Rolling Stone, Once a Counterculture Bible, Will Be Put Up for Sale."

If Rolling Stone represents the "sacred text" of the 60s-mythologizing left, then that's a sad indictment. But it's obvious that the magazine was part of transforming the "counterculture" into the "culture." Its revered status as a cultural "agent of change" seems to be a major reason why the media elites grant the magazine a pass on smearing entire universities.

And with that, let's return to those media lectures about the need for honest and competent journalism.