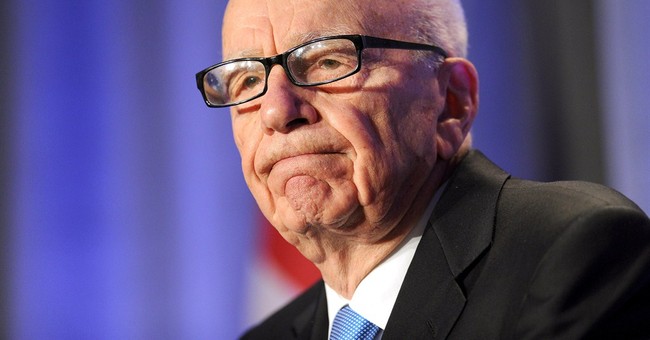 When James Carville rants that Rep. Trey Gowdy is a super-villain spawned by Rupert Murdoch, conservatives could reply by noting that Murdoch has much less of a financial connection to Gowdy than he does to gay leftist TV producer Ryan Murphy, who had one hit with "Glee" and an ugly garbage barge of other TV programs.

In June 2012, Murphy hosted a $25,000-per-person event at his Beverly Hills home for Barack Obama's re-election that included celebrity attendees Julia Roberts, Reese Witherspoon and "Glee" star Jane Lynch. He threw his own Murdoch money into that cause.

In the second week, a religious man is tied up for an execution while a young thug lectures him: "My father was a true believer. Ate the little cracker and drank the wine every Sunday. And he was the meanest son of a bitch you've ever seen. Kill a cat for purring too loud. You want me to tell you the worst thing in this world? Religion. That, and regulations."

When the religious man insists that killing people will never bring him peace, the killer laughs, and replies, "Well then, I guess I'm just going to have to kill God. That is my message to the world."

Murphy's hatred of religion remains as strong as it was in this show's second season about evil, hypersexual murderous nuns.

On "Scream Queens," the president of a sorority house, named Chanel, is asked why she is so evil to everyone, and she replies her boyfriend cheats on her and her parents didn't call her on her birthday "because they were too busy hosting a fundraiser for Jeb Bush." After Chanel kills a maid in the house by putting her face in a deep fryer, the sorority discusses Fox News host Megyn Kelly as an "awesome" role model.

A few weeks later, Fox News was name-checked again. As a sorority sister explained what happened after they covered up a previous murder: "One girl killed herself, I heard. Another girl was institutionalized. The third is actually doing pretty well on Fox News."

Every week, there's a political reference. The sorority house planned an election, and one girl pledges to help another girl win so she can "beg to be her second-in-command, while quietly pulling the strings behind the scenes like Dick Cheney."

The Hollywood Left is still raising money for Obama in their homes and supporting the Democrats at the office in their scripts. The only truly scary thing for Ryan Murphy is worrying what's next if this sludge fails to satisfy today's very jaded youth.