Yawning Over the Left's Pizza Bullies 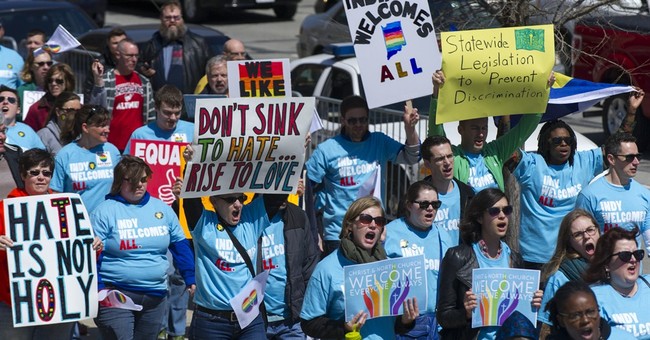 The Old Media loathes the New Media as unreliable, but have no right to pass judgment. Increasingly, they are prone to leap into news stories based on their own liberal social media networks. Look no further than the new Indiana religious freedom law. They could not get enough of those angry tweets from Hillary Clinton and public-policy geniuses like Miley Cyrus.

Based on Twitter, they touted a "growing outrage" from coast to coast and obsessed over Indiana's "bigotry" for days. Conservative social media also reacted forcefully to the Hoosier contretemps, but apparently it's too much to expect "objective" journalists to notice much of that.

Take Memories Pizza in Walkerton, Ind., a town a few miles southwest of South Bend. Alyssa Marino, a pushy TV reporter from ABC 57, showed up to ask how they would treat a couple seeking catering for a same-sex wedding.

Crystal O'Connor replied, "If a gay couple came in and wanted us to provide pizzas for their wedding, we would have to say no. We are a Christian establishment."

Mistake. Business owners are out of line living their Christian faith. The angry left went berserk. Tweets like this one followed: "Who's going to Walkerton, IN to burn down #memoriespizza w me?"

Christians are now living in fear in this country.

A blogger on the radical Daily Kos boasted: "The hand of justice in the age of social media has never been swifter."

Now reverse the proposition. If a gay restaurateur in Indiana (or anywhere) had to close due to Internet vitriol caused by his defense of his gay lifestyle, the news media would go nuts.

That didn't happen with these Christians.

What happened next demonstrates the depth of conservative/libertarian feeling about this liberal hooliganism. Lawrence B. Jones and Dana Loesch's radio show set up a GoFundMe account to help the O'Connors survive the controversy and immediately raised a fortune -- more than $840,000 out of sympathy and solidarity with the O'Connors.

So while the national media couldn't stop reporting on Indiana as an entire state full of troglodytes, numerous outlets never mentioned the Walkerton pizza hubbub. The New York Times? Nothing. USA Today, the paper that reports from all 50 states every weekday? Nothing. National Public Radio? Zip. NBC News? Zilch.

ABC News' Gio Benitez reported on the story on the night of April 1, but didn't note ABC was responsible for it -- and he mangled the actual point. "Police say one pizza shop in Walkerton (was) inundated by threats after admitting publicly it would deny service to some same-sex couples." That's not what she said. He even ran the Crystal O'Connor clip after he misinterpreted it.

Indeed, the O'Connors have been very public in their statements that no one has ever been turned away. But there's a world of difference between that and catering an activity they consider immoral. ABC knows this.

Benitez didn't repeat the error the next day on "Good Morning America," but ABC never came around to the overwhelming GoFundMe protest response. CBS briefly touched on the story on "CBS This Morning," but also ignored the fundraiser.

Journalists believe they are a force for unbridled goodness -- unless, of course, their crusading ends up with people closing their restaurant down because of fear of violence. It's too bad ABC won't ever shine a light on the rage their own "enterprise journalism" caused.