What Jokes Are Too Insensitive? 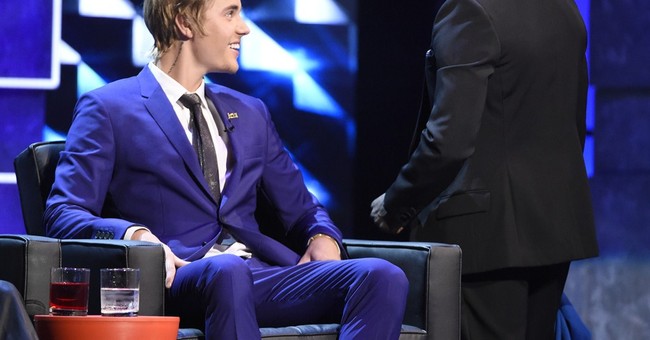 Trending
Comedy Central hosted another one of its vicious and disgusting celebrity "roasts" on March 30, with Justin Bieber as the target. During the "pre-show" before the roast, unfunny comedian Jeff Ross arrived wearing a pope costume and accompanied by sexy "nuns" in black habits and fishnet stockings.

Red-carpet host Sarah Tiana introduced him as the "popemaster general" and gushed,"You look amazing. You're going to be hilarious." Ross replied, "Bless you, Sarah. Congratulations on all of your abortions."

The slaughter of innocent babies is hilarious, apparently. During the roast, rapper Snoop Dogg lashed out at Bieber. "Now when your mama was 17 years old and got pregnant, everybody told her to get an abortion, right? ... And they still trying to convince her right now." Comedian Natasha Leggero cracked that Bieber has "moves" because "he was in the womb dodging a coat hanger."

Question: If that isn't controversial -- to say the least -- what is?

On the iHeartRadio Music Awards that same evening, actor Jamie Foxx made fun of 65-year-old Olympics legend Bruce Jenner, who is reportedly pondering a "transition" away from his "assigned" maleness.

Jenner "will be here doing a his-and-hers duet by himself," Foxx announced while a photo of Jenner flashed behind him. "I'm just busting your balls while I still can."

Horrors. There is nothing the transgender lobby hates more than crotch jokes. Many prominent "trans women" show outrage and refuse to answer whether they have retained their male genitals.

A flood of social-media accusations of mean-spirited "transphobia" led to stories by CNN, MSNBC, TMZ, USA Today and others. The most amazing part was who was allowed to pose as guardians of civility. USA Today quoted a tweet from gay gossip columnist Perez Hilton: "Boo! Shame on you #iHeartAwards for allowing #iamjamiefoxx to be transphobic on national television! Those #BruceJenner jokes were wrong!"

This is the same Perez Hilton who ruined Miss America contestant Carrie Prejean for not "correctly" answering his endorse-gay-marriage demand during the pageant's question-and-answer routine on NBC and then called her a "dumb (B-word)." This is the same Perez Hilton best known for routinely drawing graffiti on photos on his blog: semen dripping out of the mouths of celebrities, both male and female.

Shame on anyone who thinks this pig has the right to pass judgment on anyone's civility.

"Kanye wants Jamie to publicly apologize to Bruce and his daughters," an insider explained to the gossip site HollywoodLife.com. "He's tight with Jamie, but taking jabs at Bruce's sexuality at an awards show, let alone one for kids, is just wrong. ... Really Kanye thinks Jamie made a fool of himself, more than a fool of Bruce."

So Kanye West -- the jerk who said, "George Bush doesn't care about black people" in the middle of a Hurricane Katrina fundraiser on national TV -- is now playing Miss Manners and insisting that someone (SET ITAL) else (END ITAL) made a fool of himself on the boob tube.

Kanye West -- the guy who raps that Jesus is the "most high," but he's a "close high." This is the guy who stopped a "song" at a concert in Australia to demand that everyone stand up, and those who didn't had to display a prosthetic limb and a wheelchair to prove they weren't showing disrespect to the rapper.

Jenner apparently demands nothing but respect. The pope invites ridicule. Abortion is funny. God help us. Our world is upside down.