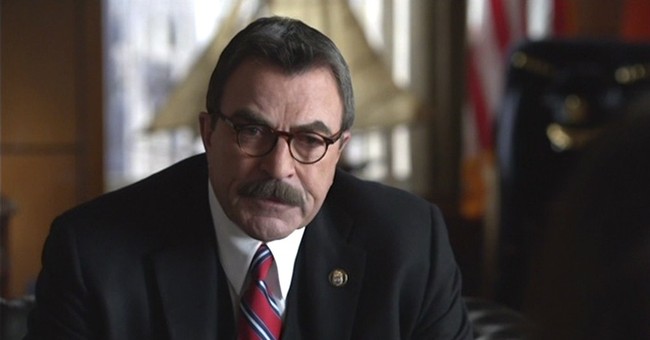 While the cultural commissars keep throwing praise and awards at raunchy shows on trendy Internet streaming channels, CBS has a series of highly-rated traditional police or military shows that get no attention or respect. "NCIS" keeps spinning off shows -- this year in New Orleans -- and "Blue Bloods" is a consistent Top 20 performer despite airing on Friday night. You won't see its star Tom Selleck at Emmy awards time.

"Blue Bloods" deals with an Irish-Catholic family of cops, headed by New York police commissioner Frank Reagan, played by Selleck. Some Catholics became fans of the show as a rare portrayal of a church-attending Catholic family dealing with today's thorny issues.

Some controversial topics lend themselves to debate. But the Hollywood left has another view of its pet causes. There is no moral relativism. There is right and there is wretchedly wrong.

On Oct. 10, someone at CBS pushed for a Very Special Episode on homosexuality -- and the allegedly horrific Catholic stance on it. At the opening of the episode, a policeman is "outed" by being at a crime scene in a gay neighborhood. This leads to Selleck's police commissioner having to discuss it at a press conference.

A reporter -- clearly speaking for Hollywood -- sneers at the top cop: "The Catholic Church condemns homosexuality as a sin, and the commissioner is famously Catholic. How do you line up your anti-gay faith with your role as an equal-opportunity employer?" Selleck's character replies: "What my men and women do in private is their own business."

The reporter shoots back: "So you only condemn homosexuality on Sunday?" All Selleck's character can offer is, "Well, I do believe the church is a little behind the times on this. But then, I still miss the Latin Mass; so next question."

This clumsy non sequitur spurred the rest of the show's plot. The producer wheels in a new character, Cardinal Brennan -- a stand-in for Cardinal Dolan of New York -- painted as a good friend of the commissioner's. Over lunch, he demands a public apology for the anti-Catholic slur over lunch -- although he apparently agrees in private that the church teaching is wrong.

"Come on Greg, give me a break. You and I have talked for hours about ways the Church needs to reform," Selleck's character laments. The cardinal replies, "Alone, in private, just between us men." The commissioner drags in the clergy sex-abuse scandals: "I do believe the church is backwards on this. And of all the stands to hold onto, in the midst of the scandals of the past decades." The cardinal shoots back "The Catechism of the Catholic Church remains firm on the matter, Frank." He then holds out his ring for an outraged Selleck to kiss.

CBS doesn't care that the Catechism's paragraphs on homosexuality preach "respect, compassion, and sensitivity" to people with homosexual attractions. That's never enough for Hollywood. The minute it suggests these men and women are "called to chastity" to avoid sin and "fulfill God's will," the conversation is over.

The episode's stick-figure propaganda continued. Because of his refusal to apologize, the commissioner is removed as guest of honor from a fundraising banquet for his old parish school. The episode ends with a religious sister who runs the school. Here comes another liberal plot twist. She confides, "Commissioner, the day I entered the convent started on the train platform in Madison, Wisconsin, where I kissed my girlfriend goodbye," and "there's never been a day I'm ashamed of who I was before, so thank you."

At CBS, the kangaroo court convenes, and the defendant is guilty before the episode is even written. It's an eyebrow-raiser when a network knowingly drives a program's natural audience away because it can't help but scratch a persistent leftist itch.