Bob Barr
|
Posted: Apr 11, 2018 12:01 AM
Share   Tweet
The opinions expressed by columnists are their own and do not necessarily represent the views of Townhall.com. 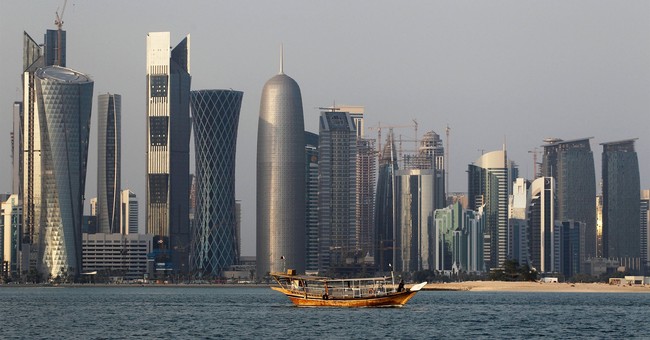 If one were to pick an emblem of America’s global military might, the B-52 properly might top the list. The strategic bomber’s expansive 185-foot wingspan and 159-foot fuselage, make the “Stratofortress” a universally recognizable symbol of unrivaled aerial firepower. This is especially the case if you are unfortunate enough to be the target of its devastating payload – which can be munitions ranging from unguided or guided bombs, to cruise missiles or nuclear weapons. Reportedly, up to 500 Russian mercenaries fighting in Syria found this out the hard way in February, illustrating that when America wants to send a message, it is often the B-52 that serves as its courier.

So then, what Middle Eastern country does the United States trust with hosting our regional fleet of B-52s, a crucial weapon in the fight against ISIS and other terrorist forces -- Iraq? Saudi Arabia? United Arab Emirates? None of the above, actually. Instead, America turns to one of its biggest little allies in the world: Qatar.

In terms of land mass, Qatar is slightly smaller than Connecticut. Yet, despite its small size, the nation is home to America’s largest air base in the world outside the U.S. Al Udeid airbase, located just outside the capital city of Doha, is home to some 11,000 military personnel. The base also serves as the overseas headquarters for United States Central Command. Qatar’s geographic location along the Persian Gulf, a stone’s throw from Iraq, Iran, Afghanistan, and Pakistan is in part what makes the country such a strategic partner for the U.S.; another, less known facet of this partnership, however, is Qatar’s strong, pro-Western culture.

Unlike impoverished Middle Eastern countries, which are breeding grounds for Islamic terrorism, Qatar’s population is diverse, highly educated, and wealthy; enjoying the highest per capita income of any nation in the world, thanks to its massive reserves of natural gas. It is a nation driven by commerce, with little desire for radical religious modalities that hamper economic growth elsewhere in the area. Doha has become a major hub of Western culture in the region.

In the center of its capital, a half dozen American universities, including Texas A&M and Georgetown, maintain modern campuses where American students can earn degrees in studies such as petroleum engineering or international economics. Additionally, more than 650 American companies operate in Qatar; and, Boeing recently inked a $6.2 billion order with Qatar for 36 F-15QA aircraft, to be built in Boeing’s St. Louis county facilities.

These are reasons why recent rumors of Qatar’s relationship with terrorist organizations should be regarded with high skepticism. It is true that Hamas and the Muslim Brotherhood have organizational presences in Qatar, but only at the behest of the United States. This allows Washington to keep a closer eye on the activities of such organizations than would be possible if they were located elsewhere.

Much of the fear-mongering regarding Qatar and terrorism appears to emanate from other Middle Eastern countries, like Saudi Arabia, which are competing against Qatar for American military dollars. Qatar’s regional adversaries also are looking for ways to undermine its government and wrestle away the country’s rich natural gas reserves. Outmatched by countries with more advanced public relations programs like Saudi Arabia, Qatar has struggled to beat back such allegations with its far less robust PR programs.

The proof, however, is in the pudding.

The massive, continued presence of the American military in Qatar, a strategic relationship reaffirmed by Defense Secretary James Mattis as recently as this week, should be evidence enough that speculation about Qatar’s flirtation with terrorism is utter bunk. Common sense and strategic military planning dictate that the U.S. would hardly invest massively in a country that is a high security risk. Furthermore, the U.S. agreed to a $300 million sale of missiles to Qatar this week, with the State Department noting Qatar “is an important force for political stability and economic progress in the Persian Gulf region.” Again, if Qatar was falling into the terrorist orb, such a deal would make no sense.

The bottom line is that there is an active campaign to undermine Washington’s relationship with Qatar; a relationship spanning decades, with major strategic economic and military significance. Such rumors are pushed by its competitors, which have considerable spoils to gain by a weakened Qatar with a strained relationship between it and the U.S. While allegations against Qatar regarding ties to terrorism should, of course, not be taken lightly (not that there is any evidence suggesting the U.S. has not done its due diligence in investigating them), Qatar is, and should continue to be, a valued friend in a region where such strong allies are increasingly hard to find.