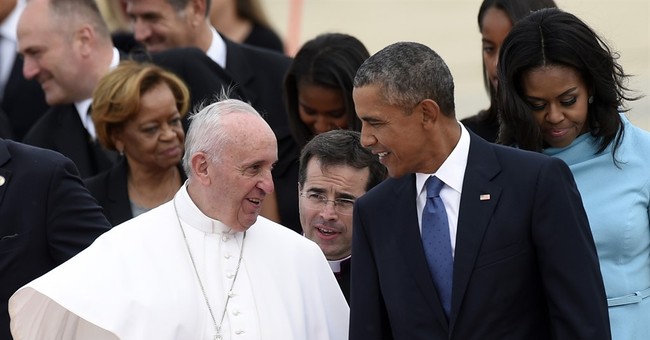 EXCLUSIVE: Through an anonymous but well-placed source deep within the White House, we received a leaked copy of a preliminary draft of Pope Francis’ Wednesday and Thursday itinerary for his historic visit to Washington D.C., prepared by President Obama’s crack political advisers.

9:15 AM – White House Welcome Ceremony and Private Meeting With Obama. The Pope’s first official stop in Washington, D.C. is the White House for a welcoming ceremony featuring a special performance by America’s self-proclaimed deity, Kanye West. In keeping with the Obama Administration’s reputation for presenting thoughtful gifts to Heads of State, John Kerry will present Pope Francis with an Apple Watch and a DVD box set of the fourth season of Game of Thrones. (NOTE: Vice President Biden is not to be present for this event, because of his penchant for profanity and the likelihood he will spoil the surprise by telling the Pontiff how the season ends.)

Following the ceremony, Obama and Pope Francis will retire to the Oval Office where they will share their favorite quotes from Pastor Jeremiah Wright, Fidel Castro, and other mentors. Afterwards, Michelle Obama will narrate a slideshow about the Obamas' commitment to serving America’s poor, in which she is seen working in a food bank while wearing her favorite $500 sneakers.

11:00 AM – Papal Parade. A special Papal Parade will take place after the Pope leaves the White House, with a special detour past Freedom Plaza. There, the Pope will stop and meet the two remaining members of Occupy D.C., to discuss the systemic oppression of upper-middle class white liberals. These two unemployed Ivy League graduates are expected to demand the Vatican change its “problematic” Christian viewpoints because, as atheists, they feel “triggered” with having opposing viewpoints thrust upon them from the “epitome of a white, patriarchal Establishment.”

3:00 PM – Global Warming Forum. The Pope will be a guest of honor at a special forum on Global Warming, hosted by Al Gore. The forum is expected to have little to do with actual environmental issues, and instead will have several open microphones at which attendees will be able to blame capitalists and corporations for the world’s problems. Hollywood celebrities from across the United States are expected to charter special flights to the Nation’s Capital for this event.

8:00 PM – “Free Everything” Beer Summit. In the evening, Pope Francis will join President Obama, Bernie Sanders, and Jimmy “The Rent Is Too Damn High” McMillan for a special presidential pow-wow to brainstorm ideas for making everything free in America -- from education, to healthcare, to rent. Ben & Jerry’s will provide a special edition ice cream for the summit, “Proletarians & Cream.”

10:00 PM – “Papal Party at the President’s Pad.” The Pope’s final event of the day will be a veritable “Who’s Who” of the Liberal elite. Caitlyn Jenner is scheduled to deliver a stirring speech about the hardships of being a reality show star in a society hostile to forced celebrity; and the evening will be capped with a special performance of “99 Problems [But the Vatican Ain’t One]” by Jay-Z. The event is intended to raise awareness for the struggles of the poor, with all guests asked to take Instagram photos of themselves holding glasses of expensive champagne, and using the hashtag, “#blessed.”

10:00 AM – Congressional Speech. Joined by dozens of illegal immigrants in the House visitors’ gallery, Pope Francis will become the first Pontiff to speak to a Joint Session of Congress. In his speech, the Pope is expected to call for greater compassion in dealing with the tens of thousands of illegals regularly flooding across America’s border from Mexico. However, Pope Francis is expected to stop short of pledging any of the Holy See’s vast wealth in dealing with the financial burdens of illegal immigration; nor will he present a plan to facilitate immigration into the Vatican. Additionally, the Pope will read from the Book of Revelation to drive home his warning about Global Warming, and will call on the Congress to place greater faith in Obama’s use of public funds to invest in campaign donors’ green technology start-up companies. The Pope will end his speech with prayer for peace, and a subtle suggestion that Obama be considered for a second Nobel Peace Prize for his leadership in achieving “peace in our time” in the Middle East.

12:00 PM – Social Justice Rally. Before he departs for New York, the Pope will attend a “Black Lives Matter” rally featuring Rachel Dolezal, who will deliver a keynote address about police stereotyping.

4:00 PM – The Pontiff departs from Andrew’s Air Force Base, where he first will meet with Donald Trump to help him come up with his favorite Bible verse.

While the Pope’s itinerary was later changed by the White House and congressional leaders, our source confirms the changes were not finally decided on without a pitched battle among staff and the First Family.