Bill Murchison
|
Posted: Feb 09, 2016 12:01 AM
Share   Tweet
The opinions expressed by columnists are their own and do not necessarily represent the views of Townhall.com. 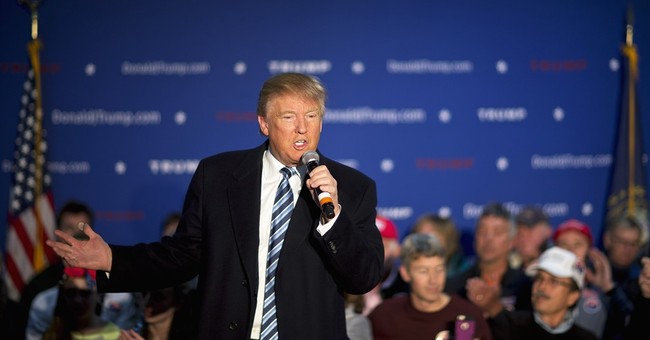 Trending
That Donald Trump, in his quest to lead us back to national greatness, feels free to brag, distort, lampoon, defame and empty his personal trash on every political doorstep is one sign -- but hardly the only one -- of a few changes in America's moral makeup over the past half century.

There's also the current dust-up in Dallas, Texas, over the city's alleged inability to block a "sex expo" in the local convention center. The mayor wants to bar the door to "Exxxotica," as the convention calls itself. Various local groups second the motion. "Can't do it," wail officials of the convention center. "That would be to Restrict Free Speech in Defiance of Our Precious First Amendment! And get us sued in the process."

See what I mean? We're engaged, all around, in prying from our windpipes the dead hands of the Founding Fathers. Get those guys out of here! They're dead!

I expect Trump, from the rear of his medicine show wagon, would voice hearty approval of that viewpoint. These days we say what we want to -- never mind the forgotten obligations of citizenship, civility and morality.

The idea that society can't police itself -- can't enforce standards regarded as both right and useful -- is nonsensical, a cover for weakness, a balm for the economic itch. A Dallas city councilman, noting the city's efforts to keep the convention hall full, suggests, "If we're going to compete with Vegas, we have to be prepared to get a little Vegas on us." Wow! Wouldn't the author of The Federalist Papers like to hear that one? Very, very Trumpian.

In Roth vs. United States, handed down in 1957, in the mistily remembered days of Ike Eisenhower and Betty Furness, the U.S. Supreme Court declared that "implicit in the history of the First Amendment is the rejection of obscenity as utterly without redeeming social importance." "We hold," said the justices, "that obscenity is not within the area of constitutionally protected speech or press."

After 15 years or so, the cultural upheavals of the 1960s changed the Court's mind -- and the minds of many ordinary Americans who welcomed official permission to burn U.S. flags, divest clothing in public and do other things formerly forbidden in Uptight America, all in the name of free speech.

The meaning of civilized discourse, as contemplated by the Founding Fathers, disappeared from view. Public argumentation wasn't about persuasion, for heaven's sake. It was about the making of personal statements in any manner one might contrive. What that came down to, of course, was the idea (if you could call it an idea and not an unseemly itch) of coercing agreement through intimidation and embarrassment.

Persuasion, you see, took so long! Minds needed changing, in the interest of Progress. Don't spend valuable time on minds. Spend it on others' fears and emotions. Raise hell! Scare, shock, scandalize, outrage!