America in Their Bones 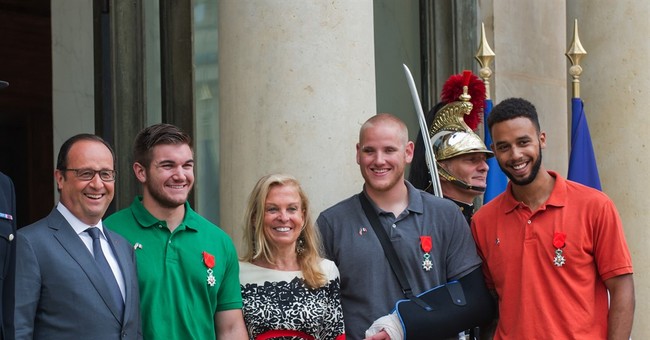 President Obama had the grace -- and the political good sense -- to telephone and congratulate the three young Americans who thwarted the Moroccan gunman aboard that high-speed French train late last week. I wonder if Obama noticed how at odds were the actions of these three heroes with the mood his policies have fostered: a mood of pessimism concerning American capabilities, a growing distaste for "getting involved" in others' troubles, a related inclination to put "me and mine" and "here and now" at the center of our policy calculations.

It was astounding how the three Americans -- Anthony Sadler, Alek Skarlatos, Spencer Stone -- leaped, without appraising personal risk, from their seats and lit into the lug who held an AK-47. They sensed what had to be done. They did it. How American!

That is no bad way to think about the affair on the train. Though as a people, we're a little rusty when it comes to sorting out good guys from bad ones and knowing instinctively which side to come in on with fists and moral power. The tenor and tone of American policy for the past decade, especially with regard to foreign affairs, has been unfriendly to the idea of power as the means of resolving disagreements among (supposedly) rational creatures: the Iranians, say, or the Russians. There's always the chance of making things worse, we're told, by flying in like Superman.

Assuming that's the point at issue -- manly thumping of sculpted chests, "biff, bam, zowie" as the measure of our ideas. In fact, mature leaders recognize that the sculpted-chest bit, performed too often, makes the performer look ludicrous and gets him taken a lot less seriously than he would like.

At the same time, interminable willingness to bargain and dicker likewise gives the impression of non-seriousness -- if not of feebleness. How feeble we may have looked to the Iranian nuclear bargainers is a question that's hard to answer, except that they seem to have walked away from the bargaining table carrying our drawers and jewelry.

President Obama -- no hawk he, as Time magazine would once have put it -- seemed to voters in 2008 like just the man to put behind us George W. Bush's bent for bare-knuckled policymaking. What few if any voters could have foretold was Obama's distaste for forceful argument or policy either way. Obama seems perpetually focused on justifying the Nobel Peace Prize he was awarded just for taking office.

There being two sides to every story, proverbially speaking, it seems only right to acknowledge the necessity and duty of negotiation, where negotiation has a chance of serving the national interest. Where no penalty or consequences befall the other side for failure to negotiate seriously, talking becomes the end as well as the means -- which hardly helps you in the next "negotiation."

No one is saying that Anthony Sadler, Alek Skarlatos or Spencer Stone (once his nearly severed thumb heals) should announce for the presidency on a platform of Reaganesque resoluteness. But it wouldn't hurt to remind the voters of how America once behaved -- and not so long ago, at that. It might even do some good.

Imperfect like any other national amalgam, the United States nevertheless stands out, or once did, for strength, for honest vigor, for willingness to talk coupled with unwillingness to be pushed too far. We have had our losing innings, but somehow the people who thrust their way across a continent got a reputation for meaning what they said. And for desiring, generally, to do the right thing.

Our present moment is one of rank and frequently dishonest historical revisionism. Ultra-pacifists and just plain anti-Americans counsel us to regret the hasty old bare-knuckled style that (sniff, sniff) sometimes hurts people! Three young men with America in their bones reminded us what it can mean to help the right people by interfering with the dangerous, the deadly and the evil. Even further, they reminded us that we're Americans.

Pfizer Whistleblower Reveals Why She Finally Decided to Come Forward
Townhall
REPORT: Dems actually messed up redistricting in Illinois and created multiple 'close to toss up' districts
Twitchy
The Democrat Civil War Just Blew up — Again
Redstate
The Leftists' Bisexual, Self-Obsessed, Narcissistic Superman Is a Reflection of Themselves
PJ Media