The 'John Wayne Moment' We're In 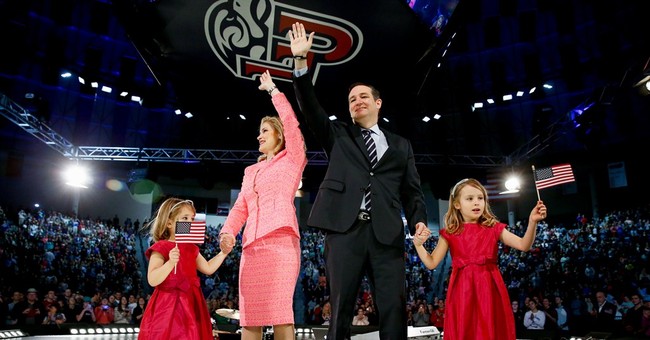 Cinematically, as well as politically, we are sort of in a John Wayne moment: which is where Ted Cruz comes in.

Things in this town of ours ain't a-going real good right now. Everything, in fact, seems to be falling apart, save in the eyes of folk who wish America would either drop into the sea or fall in line with President Obama's preachments and prescriptions.

Wait! A sudden thunder of hooves in the distance! A shout! A shot! It's... It's ... Ted Cruz, declaring his candidacy for the U.S. presidency.

I do not want to be understood as mocking a serious candidate at an undoubtedly serious moment in national affairs. The point is: Would he be volunteering to save us if the feeling weren't so widespread that we need saving, and fast?

Cruz's emergence as a rootin'-tootin' presidential candidate -- almost in the sagebrush-saga mold -- indicates just how lousy things have gotten: divisions over police shootings, anger over presidential executive orders, fears over larger if less competent government, anxiety over breakdowns in schooling and family structure. The day of Cruz's announcement, The New York Times' lead story proclaimed: "Out of Yemen, U.S. Is Hobbled in Terror Fight/Advisers Are Evacuated/Militants in Region Are Seen as Major Threat to Americans."

We haven't glimpsed so much fed-upness and woe in America since the late '70s, when inflation, the energy crisis and the Iran hostage crisis came near to causing national psychological breakdown. We yearned for John Wayne, or someone, to come boiling over the hill -- bugles blowing "Charge" -- and sort things out once and for all. By no coincidence, perhaps, the voters hired a pal of Big John's, Ronald Reagan, who proceeded, with growing cooperation on Congress' part, to restore American prosperity and thwart the Soviet threat. Our bad national mood went away.

Amid this cavalry detachment, Cruz, for all his brains and vigor, will struggle for advantage. Cruz's appeal, as his Liberty University launch made clear, is to "millions of people of faith all across America," with their deep concern for "the sanctity of life" and "the sacrament of marriage." That appeal has its clear place in political discourse, what with the strong secular bias against standards of belief grounded in religion, e.g., marriage as legitimate only between a man and a woman.

It is easy to guess that evangelicals will turn out for Cruz in large numbers, but not for Cruz alone, inasmuch as other candidates, including Rick Perry, Cruz's fellow Texan, will be working the same side of the street.

Meanwhile, there are all those non-evangelical issues, such as Obamacare, which Cruz, to be sure, wants to wipe off the books, only that's not likely to happen soon. Paul, who plans to announce his own candidacy in early April, has a constituency of his own, focused on personal liberty questions and a non-interventionist foreign policy. Walker talks of how he already has cleaned out swollen Big Daddy government at the state level. Bush will tout knowledge, know-how and personal outreach to some of the same Hispanics Cruz and Rubio want to reach.

Can Cruz -- my own senator -- bag the Republican nomination? Given the competition, I would advise no one to wager his 401(k) on such an outcome. Is Cruz wasting our time and money, therefore? In a John Wayne moment such as this one, the only reasonable answer is no.

Whatever his political liabilities -- his slim record of political achievement, his reputation as a doggoned dogmatist -- Cruz brings to this John Wayne moment ideas and emphases that voters may like. He brings not least the realization that this is such a moment: fretful, anxious, hungry for different leadership.

We will want to give an ear to the sounds pouring from his bugle.