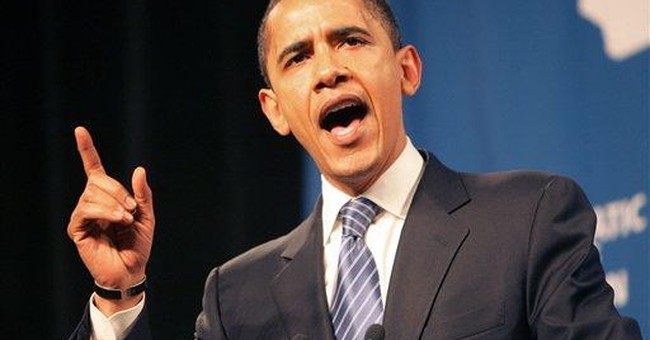 The Obama Express hurtles through the night, flattening skeptics and, with especial relish, Clintonites. But the Express's present fuel -- hope and change and whoop-de-do -- is going to run short once the campaign, not against Hillary, but against a generally united Republican Party, commences.

This generally united Republican Party is already raising hard questions about just what it is the fired-up senator is fired-up about. Beyond being fired up, that is.

In other words, what's he going to do to us, if elected? I'll let the Republicans frame their own questions, but one set will surely concern economics. This is a really, really liberal guy, economically speaking -- a guy who likes big government and big taxes and has big plans for a lot of the electorate's personal income.

Larry Kudlow, economics editor for National Review, recently posted his take on Obama's plans. Yes, yes, Kudlow is a conservative. You can say, if you like: Stuff it, Larry. I nonetheless think it fair to warn that Kudlow's case against Obamanomics is the case we'll be hearing again and again -- because Obama himself has invited us to think of everything he does as priceless and right-on.

"The Obama spend-o-meter is now up around $800 billion, and tax hikes on the rich won't pay for it. It's the middle class that will ultimately shoulder this fiscal burden in terms of higher taxes and lower growth."

He goes on. "Obama believes he can use government, and not free markets, to drive the economy. Obama's program is anti-growth. A President Obama would steer us in the social-market direction of Western Europe, which has produced only stagnant economies down through the years."

These are extraordinarily urgent things to think about. Is the senator from Illinois promising an overhaul of our entire way of doing business? And if he got this way, could we survive? And grow?

It's when questions like this arise that the fist pumping and the chanting have to stop for examination of the premises behind the excitement. We're fired up about semi-socialism, are we? Oh.

My distinguished profession, the media, works from a design, which is to highlight that which is new and interesting. Fair enough. Obama is new and interesting. As is the whole phenomenon of whooping and shouting and, occasionally, fainting when he comes center stage. Shades of Rudolph Valentino! I beg to report that Valentino wasn't running to succeed Calvin Coolidge as president. He was exhibiting himself. It sufficed. Does Obama's self-exhibition suffice? For some, yes. For the more deeply curious, the coming Republican-McCainite exhibition of Obama's economic ideas will be a lot more interesting to watch. Hard questions are gong to get asked, and soft answers ("I'm working for all people" and such) aren't going to fly.

Is this to point to the perfection of the John McCain economic program, whatever it might turn out to be? Not a bit. The Republicans have an obligation equivalent to Obama's -- to put forth a realistic program that won't bankrupt us or diminish our freedoms. In these early days of vote-wooing, specifics count less than the bouquets and male fragrances with which the suitor shows up at the front door. Once inside the house, it's different. We want to know some things about this guy. We want some answers! Answers he had better supply, with trademark fluency and some yet-untested transparency. ... Only I intuit already those answers may not be very good ones.