Ben Shapiro
|
Posted: Mar 09, 2016 12:01 AM
Share   Tweet
The opinions expressed by columnists are their own and do not necessarily represent the views of Townhall.com. 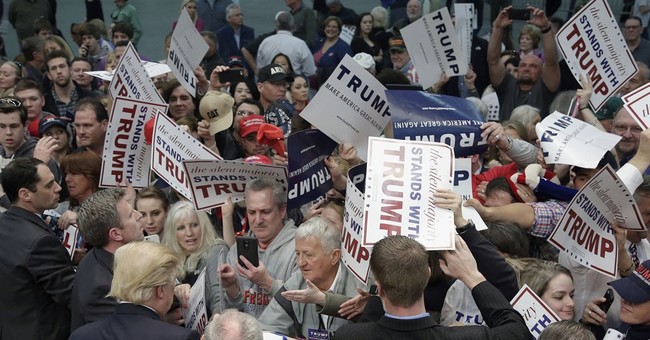 Trump isn't frightening because he's anything special personally. He's just a warmed-over mash-up of Pat Buchanan and Ross Perot, a spoiled brat billionaire eccentric with a history of position flipping and bullying foolishness. He has authoritarian tendencies on a personal level, and no awareness of the Constitution or its importance. In other words, he's Barack Obama if Obama weren't ideologically driven and suddenly experienced a precipitous drop in IQ.

So what's so scary about Trump?

First, the idolatry of a certain segment of his following. Trump has drawn some of the worst elements of American life to his campaign. To be sure, most of his supporters are decent Americans who find his approach to politics a revelation: He's an outsider, someone who will "get things done." Some of his followers identify with his hard-line position on illegal immigration and his dislike of free trade, even though Trump could flip those positions in a heartbeat if he felt the political necessity to do so.

But some of Trump's supporters go beyond that. Some are driven by the pure worship of the strong man. Like Obama's cultish support base, some Trump supporters are willing to follow him anywhere, to justify any misbehavior, to view any opposition to Trump as a sort of irreligious disloyalty. When Trump asked voters to hold up their right arms and pledge their allegiance to him, media mocked him as a Hitlerian figure. He's no Hitler -- he's not nearly as smart, as ideologically consistent, or as dangerous. He's a barroom prince. Instead, we should be concerned with the increasing tendency of Americans, both left and right, to hero-worship politicians to the point of blindness.

Which leads to the second reason Trump should concern conservatives: his appeal to nasty causes. Trump desperately wants popularity. He gauges his success by the size of his crowds, his success in the polls, and the compliments he receives in the press. He'll talk up Russian dictator thug Vladimir Putin so long as Putin calls him "brilliant." And he'll go easy on former KKK leader David Duke if Duke endorses him. Trump's lack of moral principle makes him an easy mark for some of the worst people on the planet. Combine the fact that he is drawn to those who would manipulate him with the fact that he has a worshipful crowd following him, and it's not difficult to see how the Trump movement ends in tragedy.

Finally, conservatives should oppose Trump full-throatedly because he's perverting conservatism. Even as he cultivates idolatry and massages white supremacists and global tyrants, Trump proclaims that he's a conservative. Many of us who have spent a lifetime fighting against the false notion that conservatism is a toxic brew of secret racism and fascism; Trump's rise provides easy fodder for the opposition. And his followers refuse to acknowledge that Trump has little to do with conservatism. Instead, they allow him to use the mantle of Lincoln and Reagan and the founders to shield his own egocentric rise from criticism.

Trump's no conservative -- he's a leftist at heart, a man convinced of his own power, a man willing to abandon all principle to serve himself and his allies. His followers think they're his allies, but that only lasts so long as they follow him. Yes, conservatives should fear Trump's rise. And they should resist it however and wherever possible.