Why the Left Lies 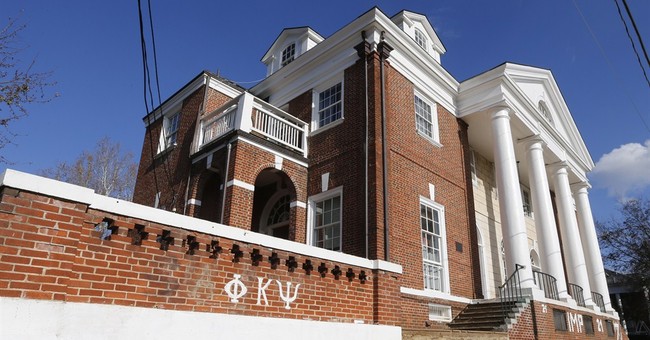 "When yet another hand clamped over her mouth, Jackie bit it, and the hand became a fist that punched her in the face. 'Grab its motherf---ing leg,' she heard a voice say. And that's when Jackie knew she was going to be raped."

Thus started a 9,000-word article in Rolling Stone magazine about the supposed rash of campus rapes across America. The writer, Sabrina Erdely, began with the horrifying story of Jackie, a college girl who found herself raped by seven men at the Phi Kappa Psi fraternity house at the University of Virginia while two other men, including her date, "gave instruction and encouragement."

The University of Virginia banned Phi Kappa Psi from campus. People vandalized the frat house, hurling rocks through windows and covering the premises with graffiti. Commentators and politicians all over the nation bloviated gravely about the deep problem of sexual brutality on campus. Those who questioned Jackie's story were accused of not taking rape seriously enough; to demand facts equated to shaming a rape victim.

There was only one problem with Erdely's story: It was false. Jackie had lied. And Rolling Stone had no evidence to back up Jackie's story in the first place. This week, Rolling Stone apologized for the story but did not fire Erdely or any of its editors; Erdely apologized not to the fraternity or its members but to virtually everyone else. She added, "In writing each of these stories I must weigh my compassion against my journalistic duty to find the truth."

Herein lies the problem. Journalism does not require sympathy for human beings. It requires sympathy for readers, who deserve truth. But for the left, truth represents a secondary value. It is far more important to forward a particular political narrative than it is to simply state the facts. And that narrative can only be forwarded if there is controversy over the facts. If, for example, everyone agreed that Jackie had been gang raped, there would be no controversy over sending her rapists to prison or prosecuting all those who looked the other way. But the leftist narrative requires an opposition, a group of evil haters who take rape less than seriously. That is how society can be blamed for the alleged rape of one woman by seven men.

So the left specifically chooses to feature situations in which facts are under dispute. Then leftists claim that no one could reasonably dispute the facts; the only people who would dispute facts about the occurrence of an evil are those who sympathize with the evil. Leftists craft Americans who require evidence into victimizers, simply so they can portray themselves as heroes. If you wanted evidence of racism with regard to the shooting of Michael Brown in Ferguson, Missouri, you were a fan of Bull Connor-style police brutality. If you wanted evidence with regard to Lena Dunham's rape accusations, you stood with rapists. Leftists don't require any evidence; they will take any allegations that support the narratives they desire at face value because that's how seriously they take rape, racism, etc.

The left's mythmaking will continue. And there will never be consequences for that mythmaking because like Sabrina Erdely, their failures spring from caring, no matter who gets hurt.