South Korea Will No Longer Bleed and Bear It 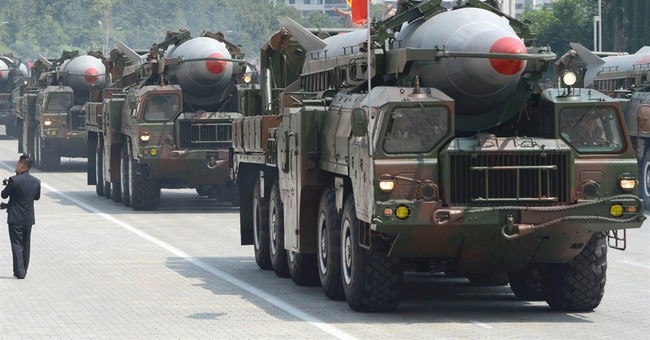 Trending
No one died on March 31st when first North Korean and then retaliating South Korean artillery units fired some 800 rockets and shells into disputed boundary waters along the peninsula's western coast.

The absence of human fatalities is welcome news. So is the South's tit-for-tat firepower display.

For the last two years South Korean leaders have been telling the current northern dynast, Kim Jong Un, that South Korea will no longer bleed and bear it.

Economic aid now depends on demonstrated North Korean good behavior. Violent provocations by North Korea, whether at sea, on land or in the air, will draw forceful and convincingly violent southern responses.

Tube artillery rounds that are 155 mm are not the most refined of diplomatic instruments; like B-52s and aircraft carriers, they are concrete hard power. However, Seoul's tailored retaliation mirrored Pyongyang's provocation with diplomatic deftness. The northerners fired 500 rocket rounds and artillery shells around and below the Northern Limit Line. Below the line lies territory claimed by Seoul. In turn, southern gunners in the Republic of Korea Army pumped 300 shells into the sea zone.

Geysers galore. Not one round, fired by either side, hit land.

The lack of fatalities likely links to Seoul's policy of swift retaliation. South Korean officials reported that the sea-border shootout began with a naval coordination "hot line" phone call from the north. Pyongyang informed Seoul that northern artillery units would conduct a live-fire exercise along the NLL (a line the north does not recognize).

Two North Korean attacks that drew South Korean blood occurred in 2010 in the NLL maritime zone. Both figure prominently in South Korea's decision to retaliate with force. In November 2010 northern artillery fire killed four South Koreans on the island of Yeonpyeong. One volley smashed a supermarket. The Yeonpyeong slaughter incensed South Koreans already angered by the March 2010 sinking of the South Korean Navy corvette, Cheonan. Investigators concluded a North Korean torpedo sank the ship. Forty-six southern sailors, most of them quite young, died in that sneak attack.

The attacks told South Korea's twenty-somethings that the Korean War is their war. The 1953 armistice is not a peace treaty; it is a ceasefire arrangement. When a U.N. team drew the NLL, North Korea immediately rejected it. The line went on the map, anyway, with the idea that a peace treaty would demarcate a final boundary. Sixty-one years later there is no peace. In March 2013, North Korean thirty-something Kim Jong Un revoked the armistice.

South Korea has won the cultural, social and economic dimensions of the Korean War. Only the military dimension, to include North Korea's pursuit of nukes and ICBM's, remains in dispute. Japan is re-arming. The South Korean military is a potent, modern force armed with reliable tanks and high-performance aircraft. Though North Korea has more artillery pieces and more planes, much of its material is antiquated and woefully maintained. Civilian satellite photos show airfields lined with decrepit MiG's that last flew in 1965.

To find out more about Austin Bay and read features by other Creators writers and cartoonists, visit the Creators Syndicate Web page at www.creators.com.