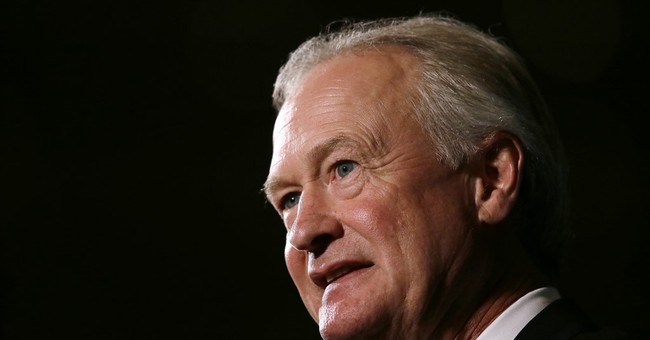 In a prior piece, I had described Democratic Presidential candidate Lincoln Chafee as “Awful Bad. Awful Sad.”

An anonymous poster blasted my risible disregard: “He is the only Presidential Candidate to serve on all three levels of government.” Daniel Sullivan commented: “He was able to stop Rhode Island from completely imploding but wasn't able to affect any real necessary economic change.”

“He’s not corrupt” one expatriate Rhode Islander agreed with me, who now lives in Torrance, CA. The first Presidential candidate from Rhode Island and Providence Plantations, one of the few elected officials from the state without a record of crime and corruption, Chafee is easy to see through. Coming from a state colloquially referred to as “Rogues’ Island” (where a two-time felon was twice elected mayor of Providence; former governors and house speakers in prison cells), Chafee has others things going for him: He is transparent, sometimes to a fault. He is awful honest, but he is still awful.

During his run for the US Senate, Chafee chose honesty instead of falsehood and evasion, and that worked for him. CBS reports:

Chafee, the mayor of Warwick, said he decided to speak publicly about his cocaine use following "dogged" questioning about whether Republican presidential candidate George W. Bush used drugs.

An interviewer posed the question to Chafee during the Friday taping of a news show.

"I had three choices: Lie, which was not an option, or evade it and receive the consequences of that, or be honest. And I chose to be honest," Chafee told the Associated Press after the broadcast.

We need more honesty. But good ideas matter, too.

In the US Senate, he stood out against President George W. Bush, voting against his budget, his tax cuts, and authorization for the War in Iraq. Why the third vote matters so much? Because (not so) front-runner Hillary Clinton voted for the war. She also supported natural marriage at one time. Chafee has been to the left of just about everyone in the Democratic field long before they announced their respective bids for President. He conducted one of the most “hostile witness” committee hearings against Paul Wolfowitz, investigating the War in Iraq. Reports indicate that Senate Democratic colleagues begged him to crossover and join them, but another New Englander, James Jeffords of Vermont, beat him to it. Chafee has a record which should square him strongly with the progressive Democratic base. The only problem? He was a Republican at the time.

Losing reelection in 2006, he left the GOP, went Independent, and supported Barack Obama for President. During Election 2008, he called Sarah Palin a “cocky whacko”. Yes, you read it right. He also called out the campaign “brilliance” of Karl Rove, and the fallout of a Palin candidacy, since she invigorated not just the conservatives, but moreso the liberal Democrats, which very likely helped President Obama get elected.

As Governor or Rhode Island, elected in 2010, Independent of political parties or even ideas, he defended calling the state Christmas tree a “Holiday Tree” because he did not want to mix government-sponsored events with religion. At least he appeared on The O’Reilly Factor and answered questions. “I don’t make people happy.” Then he commented that Fox News is “an angry network.” No, he did not answer the questions well, but at least he was answering someone. For months, Hillary Clinton has avoided the press, makes excuses about her treasonous misuse of email servers, and then runs away to out-Left Bernie Sanders and Barack Obama. She could not even articulate meaningful comments with activists from #BlackLivesMatter. Of course, “The Missing Linc” is hardly articulate himself, but not out of deception. More out of density.

In his stunning (and stunningly bad) interview with Larry King, Chafee struggled to define himself. Even though he wanted to be identified as “Governor” (his last elected office), the screen clearly lists him as “Former US Senator.” He blasted Clinton’s connections to Wall Street, because of all the money she is raising. The truth is, Lindsey Graham and Jim Gilmore of the GOP are raising more money than Chafee, regardless of Wall Street.

“I’ve always been a fiscal conservative. I voted against the Bush tax cuts.” Wow. Come again?

His latest trip into resolute honesty cannot be ignored, and why Republicans should demand secure borders and immigration enforcement.

“The fastest growing voting bloc in the country,” he added. “Of course we want that people to be treated with respect and to vote Democratic.”

As the The Daily Caller

Check and check again. Immigration overruns have always been about invading the polls and stuffing the ballot box for Democratic causes. At least Chafee was honest about it, and voters, Hispanic or otherwise, can understand why President Obama with strong Democratic Congressional majorities did nothing about immigration reform during his first two years in office.

Honesty is never the best policy for the Democratic Party (consider Hilary Clinton’s long litany of lies and distortions, along with her lying First Mate and former President). However, to tell you the truth, telling the truth has been helping Chafee. As of now, He is no longer in last place in New Hampshire, but honestly, he is a long way from first place or any place near front-runner status.

Perhaps Chafee should put his farrier skills to work and shod some mustangs to run for the nomination. Or he could go back into shoeing equines, rather than whipping global equality as a viable domestic and foreign policy agenda. He is still not even close to getting the Democratic nomination. Even then, close only counts in horseshoes, and that’s the honest truth, however awful it may be.