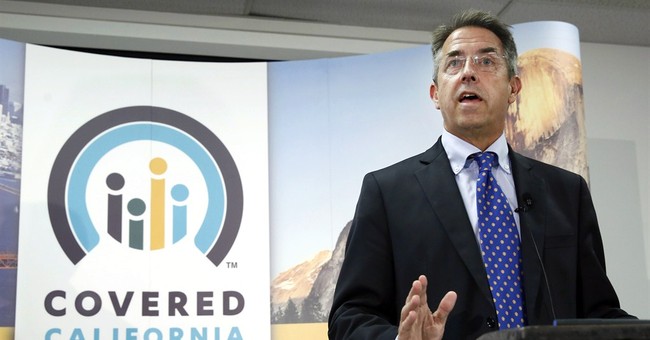 In September 2013, a few weeks before California’s Obamacare exchange Covered California officially rolled out, Congresswoman Maxine Waters (D-Los Angeles/Torrance), hosted a taxpayer-funded town hall in Gardena, CA. After two hours of listening to government bureaucrats, private consultants, and one nurse sing the praises of Obama, Waters opened up the forum to questions, complaints, and concerns.

Some residents praised Waters just because of her fighting for poor people (as if!). Another lady, who had driven from Encino, announced that the death panels were added after the US Senate reconciliation. A janitor from Los Angeles Unified School District complained about his new, forced part-time status, then shared concerns about illegal aliens getting health insurance for free.

When it was my turn, I shouted:

“As far as I’m concerned, Obamacare can go straight to hell!”

Waters wanted me to stay and listen to her justify the program at length. I could not bear being lied to for so long, and I refused to stay. I left under a cloud of boos.

Two years later, I realize my comments were merely premature. Obamacare is going to hell, and Covered California is proof that I didn’t have to help it get there. The Golden State’s Obamacare insurance exchange was supposed to be the gold standard of government-subsidized healthcare, ending the rise of uninsured Americans invading emergency rooms and costing the taxpayers millions of dollars every year.

With six state exchanges in disarray, including Hawaii saying “Aloha” to their own multi-million dollar failure, California’s exchange is not getting the exposure it deserves. Not because it is a resounding success, but rather an unsound failure, which is already slipping behind Florida in terms of enrollment numbers.

“Of the four departments included in the audit, Covered California's website had the most violations of Web accessibility standards. The audit reviewed 57 pages of the exchange's site and found:

Overall, the audit found more than 300 critical accessibility violations on the site that made certain content "completely inaccessible to users."”

Despite these disturbing trends, this information is not getting much needed attention. Columbia Journalism Review examined the media coverage on Covered California, only to find that the press is repeating the talking points, rather than bringing up points worth talking about, i.e. people who have signed up but not paid; those who signed up and paid for the first year, then dropped out; the rising number of Medi-Cal recipients (people who are not paying much, and thus are floating on someone else’s money entirely).

Breitbart summarized some unnerving trends about the exchange:

And of course, no one has discussed let alone dissected the exorbitant costs of the state legislature bringing illegal aliens into the state exchange.

How bad is this lack of media coverage for Covered California, anyway?

The Los Angeles CBS affiliate has reported nothing amiss after 2014. KNBC Los Angeles documented that 100,000 households had to wait to file their taxes because of bureaucratic paper-wrangling connected to the Covered California subsidies. For the most part, however, NBC 4 seems more intent on selling the program rather than promoting it, although tweets like this one characterize the rising frustration with the exchange. (But at least this patient got gender reassignment surgery. That’s a good thing, right?)

Besides Breitbart and Americans for Prosperity, Yelp has listed the state exchange with one star. . . out of five. Pretty bad. At least Republican Congressional candidates exposed the rampant failures of Covered CA. In 2014, former Republican Congressman Doug Ose came out of retirement to unseat freshman Sacramento-area Congressman Democrat Ami Bera. Narrowly losing the race, Ose campaigned effectively on the ineffective Covered California program, including tweets like this one highlighting the growing number of medical professionals not accepting the Obamacare insurance. The same year, deputy district attorney Elan Carr, running to replace Obamacare architect Henry Waxman, announced that patients with Covered CA could not find doctors to care for them.

For some good news, NBC affiliate KCRA, based in Sacramento reported that individual consumers are feeling the not-so-Covered California pinch. One customer, Carol James, acknowledged that her premium costs decreased, but the number and cost on her medical bills have increased, too. One hundred and fifty thousand people chose not to renew their plans, and in spite of the president’s oft-repeated, now thoroughly debunked promises, clients like James are paying more, rationing medications, and delaying medical care out of concerns over cost.

"Increases are just part of our everyday life," Howard said. "Every single year prices go up." Howard added that some policy holders may receive enough subsidy increase to offset a premium hike.

Wasn’t Obamacare supposed to make health care affordable, bring down costs? During his first term, President Obama ensured the Affordable Care Act with that promise: “If you like your doctor, you can keep it. Period.”

Sorry, Mr. President, that wasn’t true. Exclamation Point. Nearly one million Californians have lost their health insurance, and hundreds of thousands are paying more. Surprisingly, a guest columnist in the uber-liberal Jewish Journal, still a true believer in government health care, called out this lie, after regaling readers with his own Obamacare horror stories.

With Covered California uncovered, the once-trustworthy standard-bearer for Obamacare’s long-term success is turning up as another flop, and despite Governor Brown’s brief intentions of merging with the now defunct Cover Oregon, it looks as though more Americans will discover that Obamacare didn’t care, and Covered California isn’t.