Don’t Ask Him That! It Would Be Too Obvious 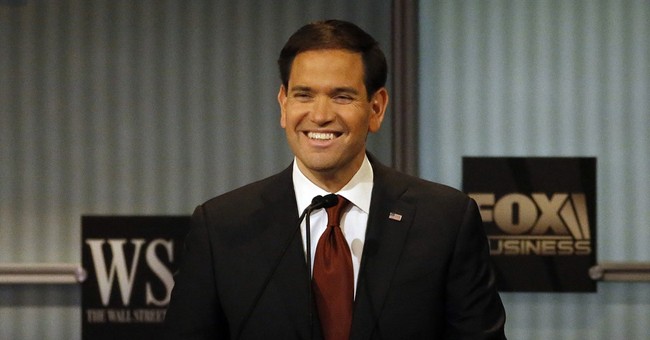 At the debate Tuesday night, Fiorina slammed Donald Trump for saying he had met Russian President Vladimir Putin in the “60 Minutes” greenroom, noting that she’d met Putin at “a meeting” not a “greenroom.”

The audience, which seemed a little suspicious to me from the beginning, responded with — I’m quoting the transcript — “(LAUGHTER) (APPLAUSE) (CHEERING).”

A quick Google search revealed that Fiorina had recently told Jimmy Fallon that she met Putin — IN A GREENROOM. As a big tech executive, you’d think she’d remember Google.

After boasting that American Express just boosted his credit limit, Rubio gave a series of canned speeches in response to every question, including everyone’s favorite about “the future”:

(Rubio proposes to be the candidate of the future with this brand-new idea: mass immigration!)

Someone needs to tell Marco that every election is about the future, not just this one. It was also the slogan for every high school graduation and prom — circa 1999.

We have now had the fourth straight Republican debate in which Rubio was not asked one question about his single legislative accomplishment: Passing amnesty in the U.S. Senate.

Rubio was Sen. Chuck Schumer’s patsy on the job-killing amnesty bill. He voted for the job-killing — and widely hated — Trans-Pacific Partnership trade deal. In a debate on economics, he did not get a question on either one.

Having actually asked Rubio a tough question once, Jorge Ramos remains the only immigrant willing to do a job Americans just won’t do: Ask Florida Man a serious question.

Rubio was practically taunting the moderators to bring up immigration with him.

– He complained about the big banks hiring “the fanciest law firm in Washington or the best lobbying firm to deal with all these regulations.”

– He said the “problem is that today people are not successful working as hard as ever because the economy is not providing jobs that pay enough.”

I wonder if the dump of millions of low-wage foreign workers on our country has anything to do with that?

– He gave a brave little speech announcing his opposition to jihadists — setting him apart from everyone else on that stage, who LOVES Islamic jihadists! — and claimed that radical terrorist groups “recruit Americans using social media.”

No, Marco, ISIS doesn’t recruit “Americans” on social media. It recruits immigrants and their children — whom you want to import more of, by the way.

Given his record, it’s too late for Rubio to take America’s side on immigration. But it’s still amazing that only Ted Cruz is smart enough to adopt Trump’s runaway, most popular position.

After coming in the lower-middle of the last three debate polls, Cruz finally made it to the No. 2 spot this week. By sheer coincidence, it was the first debate where he fully adopted Trump’s position on immigration.

But it was good to nail down the universal Republican position on radical jihadists: OPPOSED. Wow. Did not see that coming.

I don’t think taxes are that big a deal to most people. Reagan got all the low-hanging fruit: No one’s tax rates are in the 90 percent bracket anymore.

It was a relief to watch a debate with no snarky questions from the moderators, but it could have been more riveting. Only two minutes of the debate were at all interesting — and that was the two minutes spent on immigration.

.” The cheering from the Coulter household was so loud, it could be heard in Tel Aviv, which is safer than El Paso because Israel has a wall.

Given Rubio’s special concern with Israel, you’d think he would have jumped at that invitation, but he stood dumb, like he was trying to figure out how to work in another reference to his father being a bartender.

Only John Kasich interrupted to announce that we can’t deport “11 million” illegals — with the usual rigamarole about how they’ll have to be “law-abiding” (no, they won’t) and they’ll have to “pay a penalty” (there will be no penalty, except the millions of dollars we owe them under the Earned Income Tax Credit).

Kasich then sneered: “Come on, folks. We all know you can’t pick them up and ship them across, back across the border. It’s a silly argument. It is not an adult argument. It makes no sense.”

Trump replied that President Eisenhower — “you don’t get nicer, you don’t get friendlier” — managed to deport more than a million illegals back in the 1950s.

I would add that: For every illegal Ike deported, 10 more self-deported.

That was the single best part of the debate — other than the Numbers USA ad showing civil rights hero Barbara Jordan’s stirring call for a restriction on immigration: “Many American workers do not have adequate job prospects. We should make their task easier to find employment, not harder.”

We need to have at least one GOP debate where the only topics allowed for discussion are: immigration, trade and crime — i.e., (1) the only domestic policies Republicans disagree on, and (2) the only policies that directly affect most people’s lives.