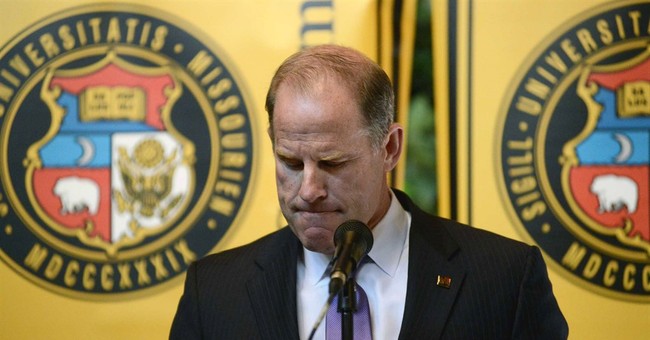 Tim Wolfe should have been fired from his position as president of the University of Missouri System, however, perhaps not for the same reasons echoed by campus protesters. The issue here is not just with Tim Wolfe himself, but the culture he represents; a culture in which university administrators expend countless hours and energy kowtowing to leftist complaints.

College campuses, once places of learning, innovation, and discovery, have become hotbeds of political correctness and vehicles for “social justice,” a phrase for which even its strongest defenders don’t have a coherent definition.

The “battleground of ideas” has long been plowed over, replaced with “safe spaces,” and similar feel-goodery. Free speech and free exchange of ideas have been traded in for “inclusion” and “tolerance.”

We’re seeing the result of this culture at the University of Missouri. Administrators like Tim Wolfe, and his counterparts nationwide, perpetuate this cycle, caving into the demands of the liberal mob, hoping for a moment’s peace. That peace never comes.

The “Concerned Student 1950,” protesters at Mizzou, unsatisfied with President Wolfe’s repeated gestures, went after his head. And they got it.

Tim Wolfe is the victim of a system he helped create; so, too, however, are the students clamoring for “social justice” and the like. To paraphrase Benjamin Franklin, students who trade in their rights of free speech and open disagreement for the mythical security of a “safe space” deserve neither and will lose both.

What will happen when these students graduate, and are set off into the world where, God forbid, people might actually disagree with them? Or say something hurtful?

Today’s colleges are crippling students for life by not equipping them with the valuable skills they’ll need to survive on their own. At schools like the University of Missouri, graduating seniors are wholly unprepared to face disagreement, cultivate the free exchange of ideas, or experience ideas and thoughts that might make them feel “uncomfortable.”

University administrators need to take the responsibility to cultivate campus cultures of learning, not protest; discovery, not ignorance. Tim Wolfe failed to do this at the University of Missouri.

Sadly, Tim Wolfe is not the only university official bending to the demands of the campus PC police, and Mizzou isn’t the only campus that has faced this type of turmoil. This turmoil fills the leadership vacuum created by administrators and university presidents who do not fulfill the main duty of their job: to lead.

This culture of kowtowing to campus leftists is not sustainable, and pretty soon the liberal mob will come back to bite the hand that feeds them, as was the case in Missouri. Mizzou isn’t the first campus to face this kind of turmoil, and if this culture continues, it most certainly won’t be the last.

If we don’t want campuses nationwide to devolve into the same chaos we’re now witnessing at Mizzou, more of these complicit administrators must be eliminated.