The Real Health Concerns for America

Allen West
|
Posted: Sep 14, 2016 12:01 AM
Share   Tweet
The opinions expressed by columnists are their own and do not necessarily represent the views of Townhall.com. 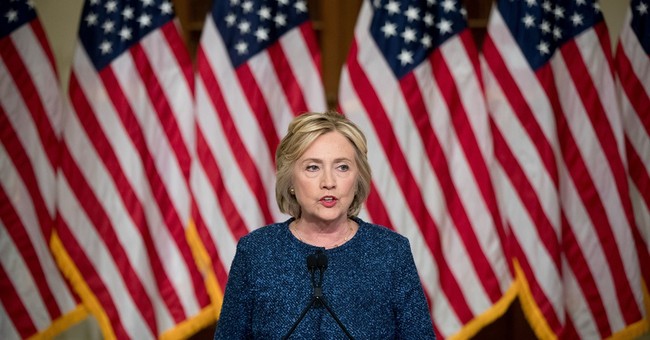 The current frenzied media focus is centered on concerns over Hillary Clinton’s health issues. Needless to say, there is cause for concern with the video of presidential candidate Hillary Clinton visibly stumbling and seemingly collapsing right before entering a transport van this past Sunday. Many friends and associates sent me the video footage, asking my assessment. Combine all that with her insidious comments about half of Trump supporters being in a basket of “deplorables” does not set course for a good week for the former Secretary of State.

However, this news about Mrs. Clinton’s health may run for a 72-96 hour news cycle. Trust me, there are those in the liberal progressive media who will be enlisted to spin this story, citing pneumonia. But there is a greater health issue that should be front and center focus for us all: the health of America.

There is a critical decision point looming for Janet Yellen and the U.S. Federal Reserve over whether to raise interest rates. Going into this year, the Fed hinted at four quarterly interest rate increases of just .25%. Many felt this was a reasonable measure because we cannot continue down the path of “quantitative easing,” the Federal Reserve’s policy of manipulated low interest rates, excessive printing of money, and the monetizing of our massive debt. Our own Federal Reserve is the largest holder of our nearly $19.5 trillion debt.

This has occurred due to the failure of the overall fiscal policy of the last seven and a half years under the Obama administration. If our economy was strong, a small increase of our bank loan interest rates would be acceptable. Obviously, we are just not at that determining point where our economy is healthy enough.

Our tax policies are not focused on building a thriving and healthy U.S. economy. They are rooted in ideological envy and punishment of those in positions to grow our economic engine. We have the highest corporate/business tax rate in the world, forcing our businesses elsewhere. And now, we even have American businesses overseas under attack by the European Union, as is the case with Apple. Trillions of dollars could be reinvested as a booster shot for this unhealthy economy, but some still hold onto a progressive socialist vision of taxation.

Our GDP growth is anemic and we should be greatly concerned that the most recent quarter report was downgraded to 1.1%. President Barack Obama may become the first U.S. president to fail to reach a 3% GDP growth, which is indicative of an unhealthy economy. We are struggling through the worse economic recovery since World War II. Our unemployment rate is not below 5%. That is statistically impossible when the workforce participation rate is under 63%, nearing a low point dating back to the late 1970s.

There are those who tout our deficits being cut in half. However, since our deficits consistently hit over $1 trillion the first four years of the Obama administration, that assertion is a half-truth. It evidences another issue adversely affecting the economic health of America -- excessive government spending. And that ties to the ever-growing debt of the United States, which has gone from $10.67 trillion in 2009 to nearly twice that today.

Let me put that into clear perspective. Under Barack Obama and his presidency, the previously accumulated debt of the United States, that of all previous presidents combined, is about to be doubled in just eight years under one president. That is not reflective of a healthy economy.

We have seen a massive explosion in poverty rolls and Americans on food stamps. Basically, the growth of the dependency society in the United States has accelerated. Recently, the Commander-in-Chief has stated that he will hold the National Defense Authorization Act (NDAA) for FY 2017 hostage in order to garner more domestic spending, a practice he enacted for last year’s NDAA.

We also have a very sick national security posture and defense policy. It is unhealthy for America to flood the number one sponsor of Islamic terrorism, Iran, with billions of dollars in laundered cash. This will only enable this Islamist regime to support entities such as the Quds Force and Hezbollah and their deployments into Syria, Yemen and elsewhere. It is unhealthy to enable Iran to purchase the lethal S-300 surface to air weapons system from Russia, now employed near the Iranian Fordow nuclear facility.

It is unhealthy to abandon allies in Europe to the objectives and goals of a resurging Russia under a dictator such as Vladimir Putin. The recent U.S.-Russia agreement in Syria has rendered America irrelevant in the Middle East, a serious long term illness. China is expanding in the South China Sea. North Korea has increased its testing of nuclear devices, contrary and in violation of UN resolutions.

All the while, we are decimating our Armed Forces’ capabilities and capacity to protect our way of life, deter aggression and defend our honor against the enemies arraying themselves to defeat America and our allies.

The real health concerns for America do not center on Hillary Clinton, albeit the media will focus on that. I wish that the American electorate was more issue savvy and not so easily distracted. The real focus in the dwindling days before our presidential election should be on the policies that make America healthier. What are the policies that will inoculate our nation against sickness and viruses that advocate for the welfare nanny-state? What policies will strengthen our spine and give this country a resolute backbone without bowing, acquiescing and surrendering to the enemies of this state?

I suppose it is similar to the movie “Excalibur” where the health of King Arthur was directly related to the health of his kingdom. In that case, we need a group of modern day knights, honorable men and women, to search out the American Holy Grail of liberty, freedom, strength, and individual independence. We could all use a good dose of that medicine.