National Security Insanity: Doing the Same Thing and Believing the Enemy Will Be Nice and Play Along 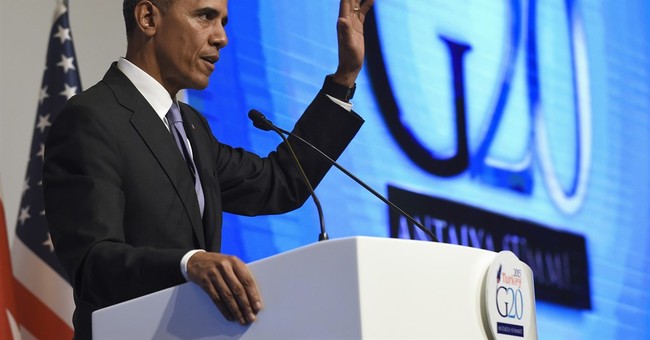 The first op-ed piece that I wrote for Townhall.com discussed the dangers of having a national security policy based, not on reality, but on campaign promises. One of the key tenets of leadership and strategy is to be adaptive and flexible (though not the type of flexibility President Obama articulated to Russian President Medvedev in 2012). We had a maxim in the military, no plan survives first contact with the enemy. That means you must have a basic plan but the most important aspect is that the plan allows flexibility, because the enemy always has a vote.

One decision has resulted in countless consequences. It was the decision made by President Obama to not adhere to the counsel of his military commanders referencing Iraq. Instead he stuck to his “plan” or, better put, evidenced his intransigent ideology and withdrew all military forces from the Iraq theater of operations. That decision had deadly consequences for some 130 who were killed and another 300 wounded last Friday in Paris.

And to think that the Friday of the attack, President Obama stated that ISIS had been “contained” and was losing strength. When you show a reticence to adjust and stick to your plan, then your reality and rhetoric is shaped to fit that which you prefer. In other words, the Obama administration will convey a policy narrative that fits what they want to believe, not reality. President Obama called ISIS the “JV team” because that enables him to stay with his plan of doing little to nothing. To admit anything else would mean a responsibility to adapt and shift to the reality confronting the president.

On Monday, President Obama told reporters at the G-20 Summit in Turkey that the Paris attacks were a “setback” in efforts to fight the Islamic State. He defended the success of his current plans saying, “The strategy that we are putting forward is the strategy that is ultimately going to work.” Questioned about his earlier contention that ISIS is “contained,” the president defended his position, explaining that ISIS “control(s) less territory than they did last year.”

As reported by Politico and MSNBC, even Intelligence Committee ranking member Senator Dianne Feinstein challenged the president’s containment assessment and questioned Americans’ security, saying she has “never been more concerned…I read the intelligence faithfully. ISIL is not contained. ISIL is expanding.”

Over the weekend after the Paris attack, President Obama and his administration released five Yemeni detainees from GITMO. They tell us that these individuals pose no threat; that is the narrative that fits the Obama reality. But consider the optics of that decision to the enemy, they attack and kill us, we release them back onto the battlefield. The belief is that it is GITMO that makes the enemy hate us and want to kill us and if we just close GITMO they will be nice. Again, that is the insanity of wedding your national security strategy to a campaign promise – and a nice exhibit in your presidential library.

Even knowing that the systems are not in place to conduct a complete validation of incoming Syrian refugees, the Obama administration continues with that plan. FBI Director Comey has stated that he does not have the resources to “vet” every person. However, this past Sunday, Obama administration Deputy National Security Advisor Ben Rhodes stated that we do have the resources to do so. Why would we not cease the Syrian refugee immigration plan until we get this situation under control? Simple, President Obama is stuck on his plan.

We should not be allowing any military age males, especially single ones aged 16-40, into America and certainly not Europe. We must stop allowing the establishment of sanctuaries in our nations. Those have created problems in Belgium, now spilling over into France. Then again, after the Charlie Hebdo rampage, the trail then led back to Belgium. We have every knowledge of where the Islamic militancy is occurring – but we claim it is just free speech, or that the signs and chants are not real.

There are neighborhoods not being patrolled. Here in America we were told that surveillance is offensive and Islamophobic, a violation. After incidents occur, we continue to hear about this one or that one that was on a watch list. That is reactive leadership.

There is something horribly wrong with our passport tracking system if individuals are able to travel from our countries, go into Syria or other Islamic terrorist sanctuaries, and return. Two US soldiers were shot and one killed when a young black man from Memphis named Carlos Bledsoe did just that. He returned to enact his Islamic jihadist attack at the Little Rock Army recruiting station. No adjustments were made. Then we had the same thing happen in Chattanooga at a recruiting station and a Navy Reserve Support facility.

I often say, when tolerance becomes a one way street, it leads to cultural suicide. We have become so stuck on the plan of multiculturalism and political correctness that we have become paralyzed by fear. Fear of what, you ask? It is the fear of being referred to as an “Islamophobe” and other tools of the politically correct crowd that is used to cause censorship. We abdicate our right as a sovereign nation because we do not want to offend folks… yes, even the folks that seek our death and demise. Consider Vanderbilt University Professor Dr. Carol Swain, who is under attack from students there for being a racist. She is a black female professor who takes a stand against Islamo-fascism.

When the forces to be want to stick to their plan, their insanity leads them to attack those who have unplugged from their deceitful Matrix.

The Paris Islamic terrorist attack was a blatant display of the intention of this enemy, specifically ISIS. We will sing, have candlelight vigils, and some will ask why did it happen. It happened because we are in a millennia old conflagration. Lest you forget that it was in Paris late in the 1790s where John Adams and Thomas Jefferson met with the Dey of Algiers and asked, why was American shipping being attacked and our citizens being enslaved? He simply responded that they were commanded to do so to non-Muslims, infidels.

We fought the Barbary Wars for more than a decade. The difference then was that we sought victory.

The attack on Paris is a turning point. We need a leader who will stand up and say this is not about nation building; this is about a strike operation that will go in, confront Islamic terrorism and jihadism, and destroy it.

France has responded. Shall we? And, will we sustain that response or will we continue to evidence our national security insanity?